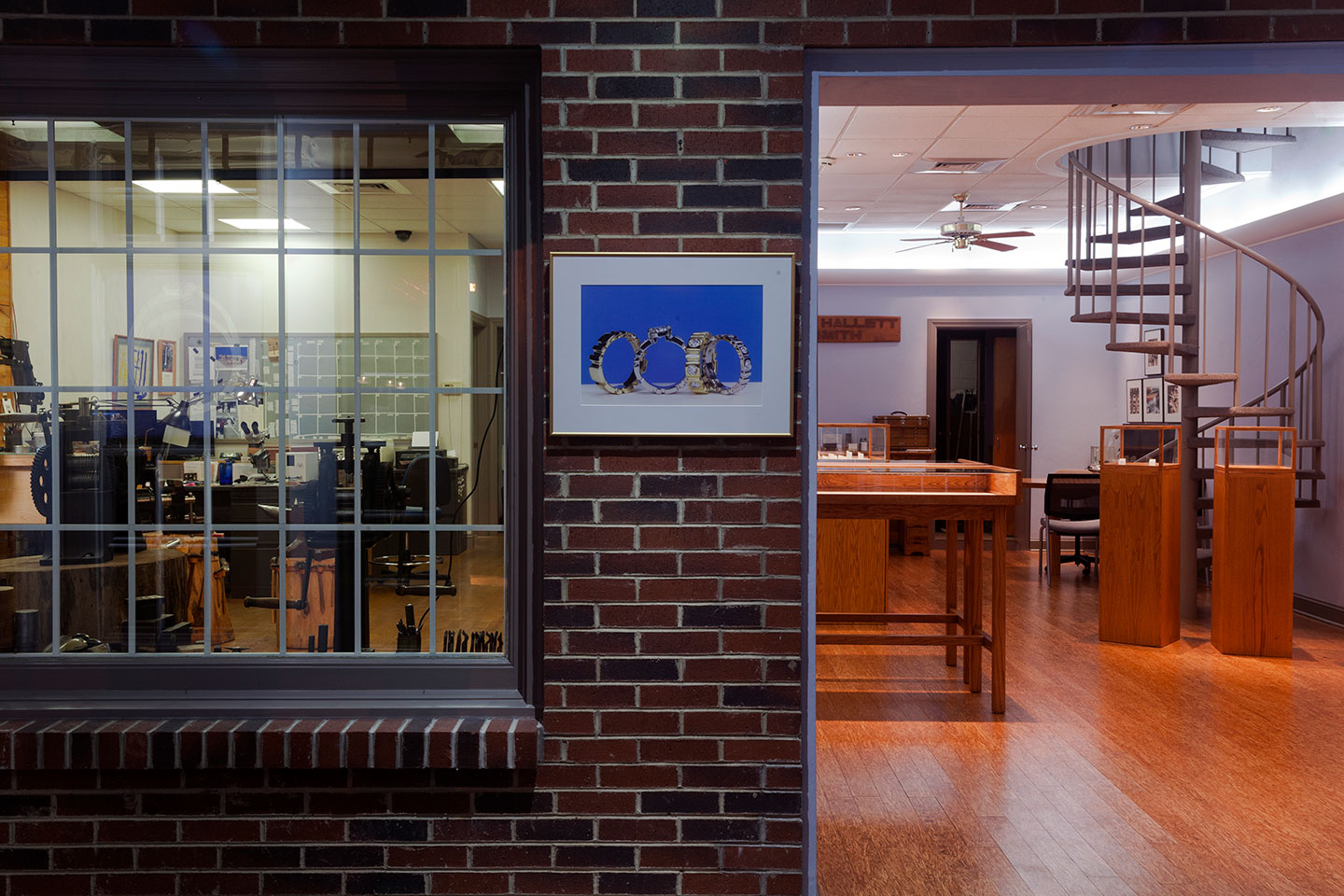 A Mom and Pop
Who Do It All

SOMETIMES JUST BEING YOURSELF is cool enough. Robert Hallett and Kyle Kotchey had always known what their business was about.

At its core, it came down to the two of them making and selling high-quality jewelry.

When the recession came along, they didn’t seriously consider selling beads or buying gold. Instead, the husband and wife team cut back on spending and kept doing what they had been doing. And it worked. They’re based in an elegant, but somewhat obscure, suburb of Pittsburgh, which made them, as an integral part of the close-knit community, a little more recession-proof than a lot of business owners..

They found that their brand of mom-and-pop, made-in-house jewelry continued to resonate with people who needed a lift and who wanted to commemorate important occasions.

“We found that people bought jewelry because they needed to be happy anyway,” Rob says. “We don’t have a lot of serious luxury or over-the-top kinds of sales, and we’re definitely a destination store. We don’t have impulse buys very often.”

But being consistent doesn’t mean they shy away from change.

Adding Matrix made a big difference, for example. And this year, they’ve updated their lighting to LEDs, upgraded Matrix software, added a 3-D printer to the shop and have invested not only in updating their website, but also in digital ads, search-engine optimization and a social-media presence.

“I discovered that we have Instagram and Pinterest photos we didn’t know that we have,” Hallett says. “A lot of people apparently like my jewelry and post pictures of it. And I’ve figured out how to communicate with people in the way they want to communicate. I’m much more likely to text them photos as part of the design process now.”

Advertising, including print ads in local magazines, has been low-key but always brings notable results.

“More than three dozen times, people have brought in print ads. One woman saved the ad for 20 years. She was divorced and had a diamond and brought in an old picture. She had a marquise diamond and we made it into an oval and made it into a ring.” Another customer who received a Christmas mailer kept a photo of a ring for several years before stopping by to have a new setting made for a Cartier ring.

Their ads are tied together graphically with a simple cobalt blue backdrop. Kotchey learned jewelry photography so she could design their promotional material.

“We don’t do much push,” Rob says. “We’re not the kind of store that calls someone from Vegas and says, ‘I just saw a great tourmaline!’ We do very, very occasional emails, but when we do, we get tremendous response, partially because our customers like us.”

Much of their identity comes from the fact that 90 percent of the jewelry they sell is their own. They do carry other lines, particularly silver lines with price points of less than $500. “The pieces we pick we like because they are vaguely like what we make. But ours is the only real brand in the store.”

Hallett and Kotchey’s partnership began with a first date to the prom.

Although Hallett began college as a physics major, soon he had a bench and torch in his dorm room; ultimately, he changed majors: his degree was in fine arts/metalsmithing.

After they both graduated from Syracuse University, Hallett worked for another goldsmith and Kotchey began a career in PR. But while they worked at their day jobs, they also sold jewelry they had designed and made. Two of the display cases in the current showroom were built by Hallett’s father to fit into their 1970 Volkswagen Beetle, which they used to travel to American Crafts Council shows. At age 25, Hallett won a DeBeers Diamonds Today design award; soon their work was being sold in more than 20 stores and galleries around the country.

In 1980, they opened their first 500 square foot studio, just five days before their daughter, Devin, was born. Raised under Kotchey’s desk, Devin now has her law office upstairs from the shop and Hallett grandchildren are visible in the shop just like Devin was.

In 1984, they moved to their current location with a studio above the showroom. During that phase they had five employees, became an American Gem Society store and won four Spectrum Awards for Hallett’s designs. But then they returned to their roots, moving the studio downstairs and working alone, focusing on custom design and selling only studio-made jewelry.

They also designed the space they work in. The entryway integrates two earlier storefronts and blurs the concept of inside and outside spaces. The studio space still has the original brick exterior and window and warm “indoor” lighting. Their CAM milling machine lives in the old doorway. The anvil and large tools are on tree stumps. Old tools contrast with new technology.

The showroom wraps around the studio and has a “daylight” ceiling, making it feel like it’s outside. Hallett designed and built the lighting from large PVC pipe and designed all the front-opening cases that were built by his father. They also make their own showcase interiors from artist paper.

“We are honest by nature, and that spirit flows to everything we do, from the recycled ash and mulberry flooring to the weight and craftsmanship of the jewelry,” Hallett says.

The cool factor has motivated them to think about the future.

“We’ll either be a whole lot cooler in two years or we’ll be retired,” he says. “I think we decided we want to be cooler.” 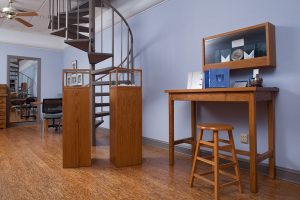 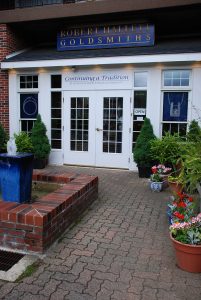 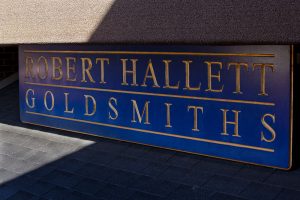 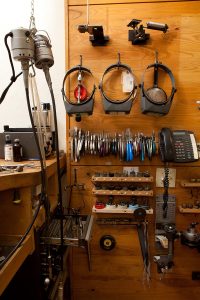 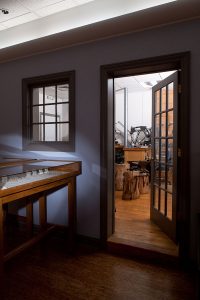 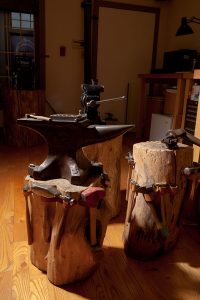 They do it all. Having a two-person designer/retailer business means that Hallett and Kotchey need to be willing to learn new skills and do almost anything up to professional standards. Kotchey is a self-taught jewelry photographer. Hallett taught himself stone-setting after their stone setter of 30 years suddenly retired. The move to CAD, digital photography and online design communication has made Hallett a computer expert, too. They also function as interior designers, architects, in-house PR designers and lighting specialists. “And in our spare time, we design and make award-winning jewelry,” Hallett says.

Their lawyer works upstairs. Their daughter, Devin, was born five days after they moved into their first store in 1980. Now a lawyer, Devin has her offices right above their current store and shop.

How it all started. “My father had many hobbies,” Hallett says. “When I was 10, he built an 18th-century-style rifle with extensive silver inlays. I sold my first jewelry in high school using tools and silver from my dad’s shop. The showcases in our shop are my designs and my dad’s woodworking.”

The partnership. Hallett and Kotchey’s life and work partnership blossomed after a date to the prom.

A nod to history. Their original craft show sign and Hallett’s old bench and toolbox are visible in the back of the showroom. A continuum of design history is found in photo portfolios and on computer screens.

Just the process of entering the contest changed the couple’s outlook and business. “Once we figured out we were cool, even before you decided we were, we started thinking more about the future,” Hallett says. “And we decided to invest in a 3-D printer. And the latest update to Matrix, which should make it easier to access our CAD design portfolio. We also did more work on new ways to handle online custom communications. And we have a plan to make more of our 30,000 images available in the showroom.” Hallett adds, “Entering is its own reward. The Coolest Store thing has upset the applecart. You start asking yourself, ‘How do other people see us?’”

Century-Old Ohio Store is Ready for Whatever Comes Next

These Were the Best Celebrity Red Carpet Necklaces of 2022

How To Make Money With an In-Store Estate Buying Show