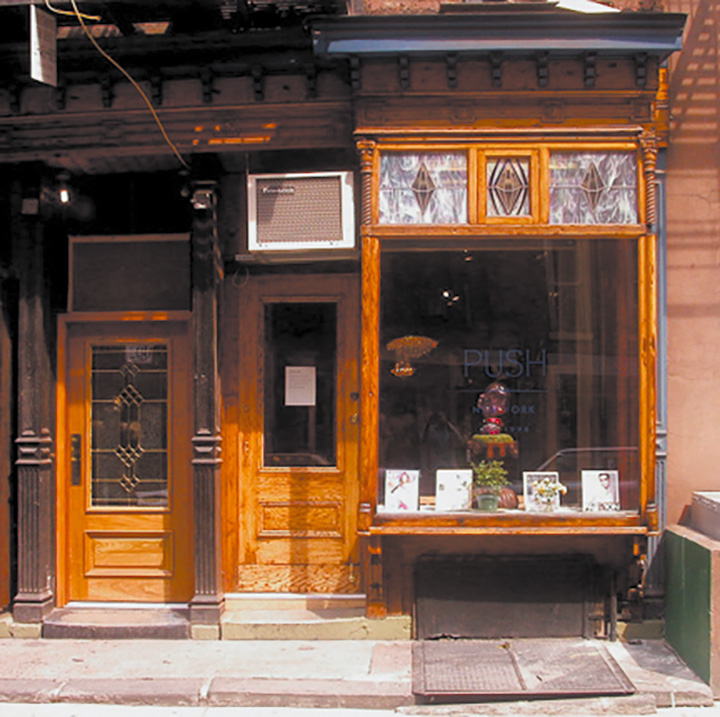 OWNER: Karen Karch; DESIGNERS: Karen Karch and Frank Ford; PROJECT COST: “We spent a couple hundred thousand on [our last] renovation; ADDRESS: 240 Mulberry Street, New York NY 10012; PHONE: (212) 965-9699; DESIGN ADVICE: “As I develop new collections, we try make our displays communicate a fresh point of view. We watch and listen to our customers closely and anticipate how to continue to captivate them, then make our moves. Even though itʼs always been from the gut, weʼve never done anything that we regret.”

KAREN KARCH first began designing jewelry in 1987, before studying metals in New York, and she started selling jewelry to Barneyʼs and Fred Segal in 1989. But she always knew she would one day open her own shop, where she could showcase her ornate, distinctively modern work. Hence, the birth — in 1996 — of Push. 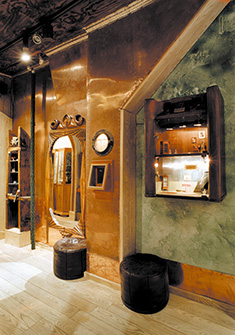 Located in the NoLiTa district (North of Little Italy), Push was part of a retail renaissance in an area where, previously, customers had been more likely to pick up a cream cheese bagel than a white gold bangle. Before that, the area had an even worse reputation; a store just down the street from Push had been an infamous Mafia joint which played host to Lucky Luciano and John Gotti. These days the area is no longer violent, but vibrant, with bright independent boutiques, avant-garde craft galleries, and cozy cafes.

Push itself has a history reaching back over a hundred years. It was originally a funeral parlor, and later, in its next incarnation as a deli, itʼs said to have hosted to a poker game attended by James Dean.
Karen, who helped actor Ethan Hawke design wife Uma Thurmanʼs engagement ring, wanted to make the space appeal to those who wouldnʼt normally shop in fine jewelry establishments. The storeʼs 110-year-old wooden façade was carefully restored by her husband, as Karen wanted to keep the spirit of the old building intact . The interior is filled with surprises, including pressed metals, exotic woods, head-turning displays, and two newly designed chandeliers. The startling cabinetry was crafted by interior/furniture designer Frank Ford, and sculptures by artist Rebecca Chamberlain help to make the store a small-scale panorama. 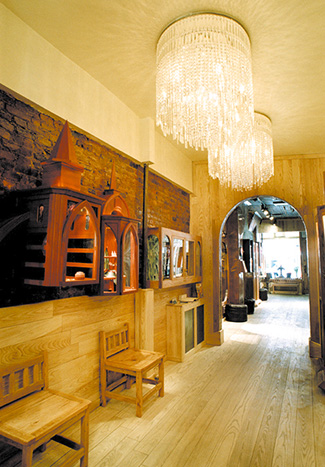 The panel were split four-to-one on this winner. Penny Palmer doesnʼt mince her superlatives, raving, “Extremely beautiful, awesome.” But, like other panel members, she wonders about the wares themselves in the pictures she saw, asking, “Whereʼs the jewelry?” Brett, too, wishes he could have seen more. “I liked the mixed medium eclecticism,” he says. “But it is difficult to get a feel for the store as a whole.” RoxAnna Sway is in no doubt about Pushʼs status: “Truly the coolest store!” She declares Karen Karchʼs pride and joy, “Way cool! A great one-of-a-kind design.” Debbie shares with Brett an appreciation of the mixed materials used, and says, “This gallery is another stop for me next time Iʼm in New York. I want to live in a place like this!” Fred Michmershuizen marks Push further down than the other panel members, musing, “This store looks rather intimidating. And whereʼs the jewelry? It doesnʼt look accessible, rather like itʼs in a museum to be looked at, not worn.” But he relents, adding, “Perhaps my negative reaction is due to the limited number of photos from this store. It does look beautiful inside.”

Related Topics: jewelry stores in New YorkPush
click to Comment(Comment)
Up Next