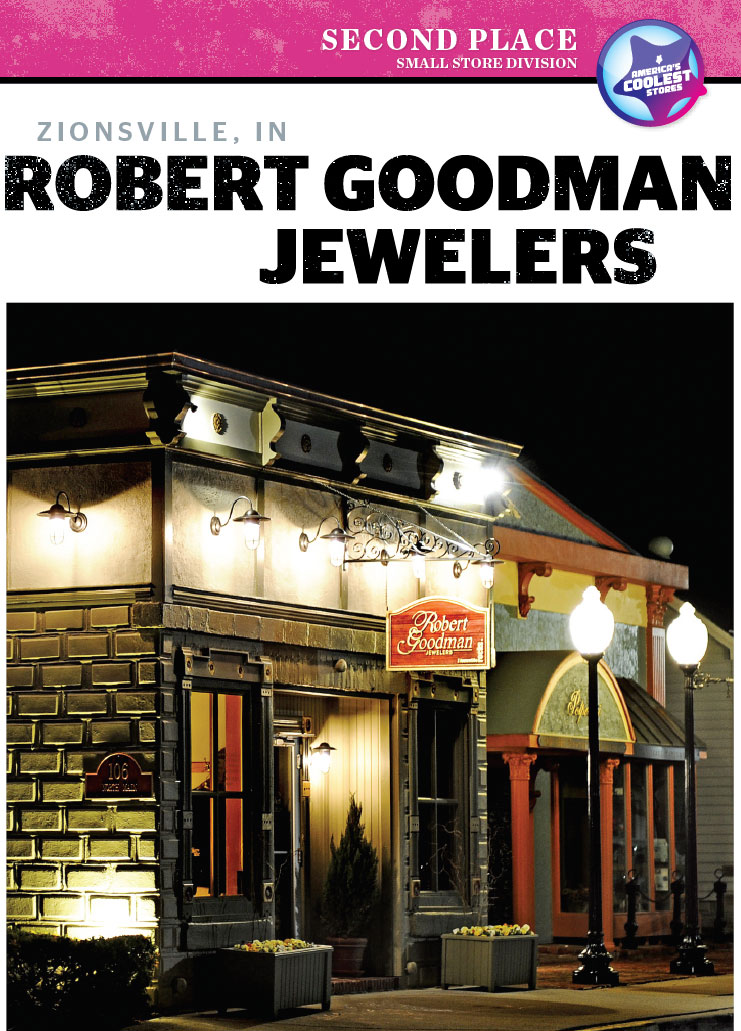 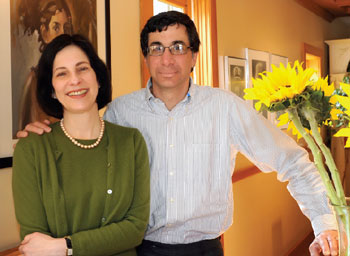 Have a carat with your lunch. It’s a diet endorsed by Robert and Rose-Marie Goodman, who call in a trendy Korean taco truck for special occasions at their Zionsville, IN, store, Robert Goodman Jewelers. The new-millennium incarnation of a family heritage that once owned stores all over Indianapolis, this third-generation jeweler has stitched its store tightly into the fabric of its highly educated suburban small town (pop. 10,218). “We chose this community because we wanted to be someplace we could be a part of,” Bob explains. Imaginative attention-getters keep their profile high: free jewelry cleaning, the taco truck and an art gallery for local talent. 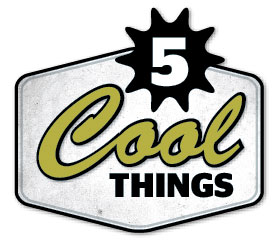 Robert Goodman keeps its market interested. The store stays focused on change because “our customers expect to see new fresh things,” Rose-Marie explains. “And they don’t want to see the same things they see in the mall.” That means sleuthing for intriguing designers. “I tell reps who come in I’m not buying, but I’m willing to listen,” Bob says. “You never know what will come out of it.” That’s how they found their Bastian Inverun line of contemporary silver and stones. The Goodmans also took on local designer Myra Perrin, whose work they admired, to create fingerprint pendants popular with parents. Officina del Tempo, an Italian power-watch brand, was a find through a friend of Goodman.

The Goodmans have added inventory for buyers shell-shocked by the economy: silver and bi-metal lines and colorful Swarovski-sprinkled Ice watches. Their guiding principles: lines must be “very interesting and cool” and high quality. That comes with advice sought from the late Irving Getz and Goodman’s own father, Robert Sr., both former Jewelers of America presidents.

The Goodmans gutted their building before they opened the store, upgrading electricity, wood cabinets from a previous store and the building’s wood floors. They tore out a storage loft to reveal an airy showroom with a beamed ceiling framing a handpainted ceiling mural. When the city made funds available for restoration in 2010, the Goodmans hired craftspeople to create tall period windows and add tri-color paint for its come-hither presence among the Victoriana of Zionsville’s shopping street.

Even the backside of the store has a mural, part of the couple’s dedication to beautification.

The art gallery, for which the Goodmans assess no commission, changes exhibitions at least quarterly, and they hold a reception for each artist. The taco truck has been a contagious source of visitors. For charity receptions, the Goodmans foot the first several hundred dollars of its Korean taco offerings, and the truck tweets its locations to a fan base of nearly 6,000 and notifies an even larger bloc of Facebook friends.

Bob and Rose-Marie write blogs on current events and Zionsville life for the store’s website that give visitors a sense of kinship with the couple.

Of, Not In, The Community

The Goodmans aren’t afraid to get involved on important issues, such as a school levy that would have added to their own taxes: “The levy lost. But we had people coming in months afterward to thank us for our support,” Bob says.

The Goodmans also take on tough tasks. A parent called them from the local hospital after her child had been born. The baby was going to die, but the parents wanted a fingerprint pendant to memorialize their child. Bob and the store’s designer went to the hospital, where they found an infant so young its fingerprints had not developed; they took a mold of the baby’s footprint instead.

What the judges say

Suzy Landa: This business marries both traditional and contemporary elements beautifully to create an environment steeped in rich family history but with keen attention to modern shopkeeping. What a treat to see both family photos and local artists’ work adorn the walls.

Terry Chandler: Stepping from the cobblestone street toward a freestanding Italianate structure, one feels more in Rome or Milan than Zionsville, IN! From the attention to every distinct detail of the building’s old-world and elegant exterior to the warm and exquisite interior, every aspect of Robert Goodman Jewelers creates an instant understanding that here, in this place, quality and attention to the tiniest detail are the rule. Surrounded by an eye-catching array of fine art and a stunning mural overhead, the gems sparkle and the Goodman’s generations of customer care and integrity are evident. Before a word is spoken, one knows this is a special place.

Don Muller:Wonderful story! I get the sense that this store and its supporting community are totally in love with one another!

Ruth Mellergaard: This store has a great website, wonderful, funny, endearing marketing, and then you get to the store, and what a building! Beautifully restored and so attractive. The interior is “of a piece” with the building, particularly the ceiling which is beautiful.

George Whalin: One proven method for grabbing customer attention is to have a great-looking building, and the 20th century classic Robert Goodman Jewelers building certainly accomplishes that goal. But this store is more than a great exterior. The interior also has a classic design with a spectacular painted ceiling and elegant wood fixtures. With their innovative marketing and active participation in community events the Goodmans have created a really cool store.

WHEN THE GOODMANS HIRED AN ARTIST to paint an egg on its side wall that began changing, cracking, and then opening to reveal a sort of Venus character, a few people didn’t like the fact an outline of a breast was visible. When it became apparent there was no town legislation on murals, instead of fighting it, Bob joined the advisory board to create an ordinance. In the meantime, although support for Lady Venus was running 15 to 1, she acquired a bikini, he says, chuckling.

The Goodmans created their own widely eclectic sound track of music that ranges from Tupac Shakur to Abba to Mendelssohn and a Shaker choir.

This story originally appeared in the August 2011 edition of INSTORE.

Our Brain Squad Rates the Best-Selling Brands of October