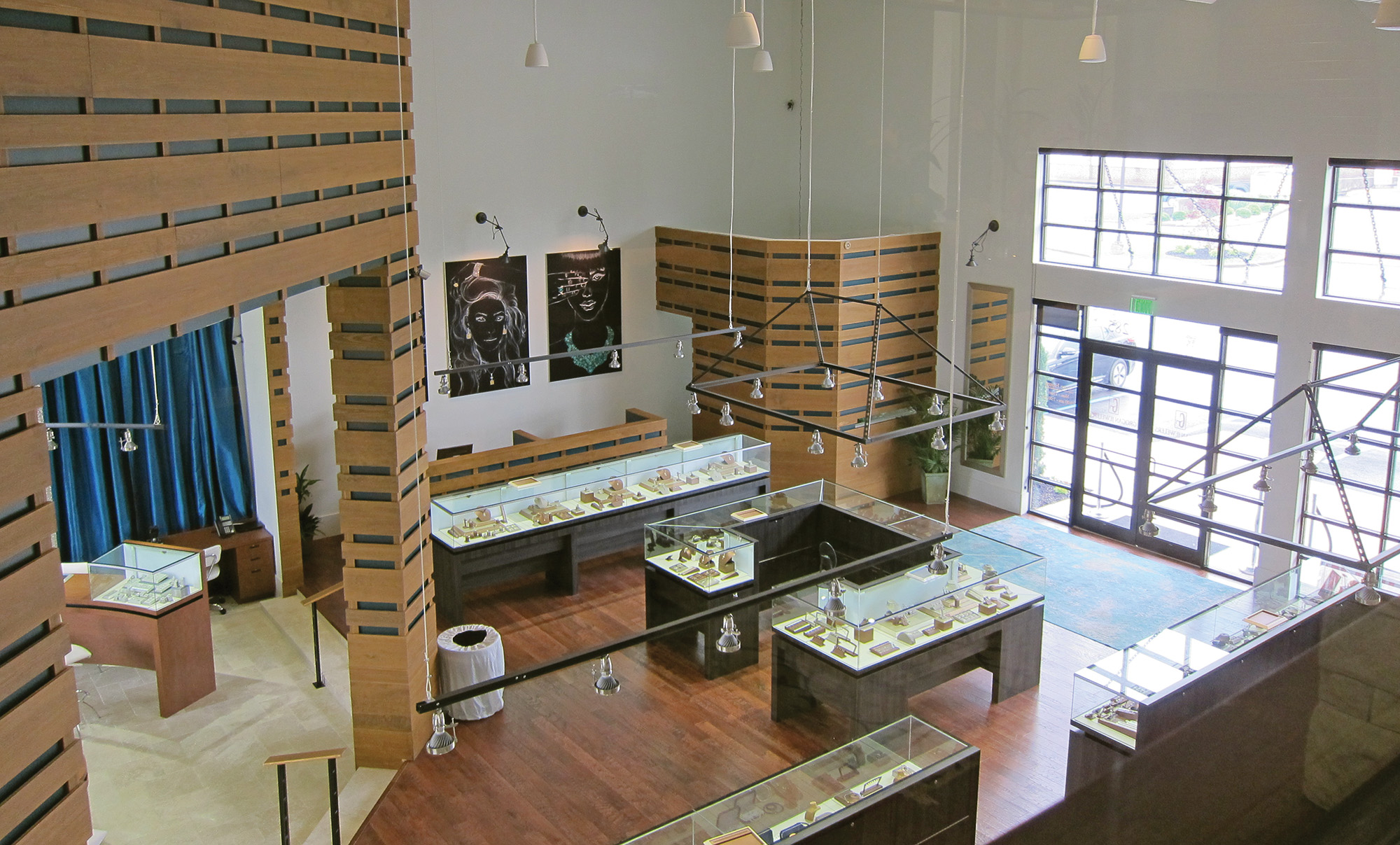 Klos didn’t make a sale that day, but Graham did.

Graham wasn’t in the market for diamonds, but he did, out of the blue, offer to sell Klos his business, Grogan Jewelers.

Initially, Klos, a manufacturers’ rep, shrugged off the notion, but Graham didn’t give up.

“The day that I came into the store I had never met him before,” Klos recalls. “But for some reason, he showed me his financial statement — that day — the day I met him.”

Klos knew a good thing when he saw it; he was impressed with how successful the store was, and intrigued by what he thought the business could become.

That was April; he closed on his purchase of Grogan Jewelers by July.

“I was 28, single, I was living in Atlanta, having a great time. My friends were saying I’d lost my freaking mind. But it looked like a good opportunity and the people in Florence were so warm and friendly. It didn’t take long for me to figure out that Florence, Alabama, was one of the best-kept secrets in the world. I saw the business potential and I loved it from Day 1. It goes to show how some things are meant to be.”

Klos, the son of a jeweler in Jefferson City, MO, didn’t intend to follow in his father’s footsteps at first. As a teenager, sweeping floors and learning engraving, which he found tedious, he thought there had to be something better. His father, on the other hand, always thought he’d be back.

“My father thought I would take over his business,” Klos says. “He hated to lose me, but he was proud of my decision. He helped me buy the store.”

About four years ago, running the downtown Florence store as well as a second location in Huntsville, Klos said he had gotten so mired in daily routine that he didn’t see the big picture anymore. Conversations with peers led him to the realization that he needed to build a new store.

But Grogan had been a fixture for nearly a century in downtown Florence, which was still an active place, with shops, restaurants and even an art walk.

On the other hand, Grogan had outgrown its space; there was no room to add the bridal and fashion lines Klos coveted, let alone a full bar and a lounge. Ultimately, he decided to start shopping for real estate.

“In this business, you have to keep changing, in every way, just to keep up,” Klos says.

So Klos bought land and knocked down an old restaurant to clear space for a new 8,000-square-foot building, of which 5,500 square feet is the new Grogan Jewelers.

The rest he rents out to three compatible businesses, including a boutique and a yogurt shop.

He’s been in the new space a little over a year.

Pausing from his busy day to chat in his expansive second floor office, looking down on the sales floor below, Klos says that his only regret is not building the stand-alone showplace a decade ago.

“We’re up about 30 percent in sales the first year,” Klos says. “And it’s really changed people’s perception about who we are. What we did was get out of our box.”

The old store might have had 3,000 cars pass by in a day. The new location boasts a daily traffic count of 15,000. Some shoppers drive 60 miles to visit the adjacent mall and the new Publix grocery store. Florence’s very first Starbucks opened a block away this year.

Klos’ vision came to fruition: He retained a loyal customer base while adding a new, younger clientele interested in bridal.

“That’s what we thought we’d see and that’s what has come true,” he says. “Location, location, location is the No. 1 thing that I learned building this store. Just because you are successful at a particular location, you better be thinking where you are going to go next if you slow down or if things change in your town. It’s imperative that you don’t get comfortable with who you are and where you are, ever.”

Initially, Klos increased his advertising to make sure everyone knew about the move. But the location itself was so visible that soon he was able to scale back. “We were in their face, right on the corner. So we scaled back and that helped the bottom line. We are doing all the social media, heavy radio for engagement customers, some newspaper, email blasts but no billboard or TV at this time.”

Give ’Em What They Want

R. Cherri Pitts of Studio C Architectures & Interiors in Birmingham, AL, says that Klos referred to his vision of the store as “Colorado style,” a description she interpreted as a chic, casual space with natural materials. On the exterior she used limestone, wood slabs, a rain screen and metal awnings.

The interior reflects that elegantly casual vibe as well. Upon entry, the vertical scale of the open, two-story space creates an instant wow factor.

A focal point is the huge stone fireplace in the sitting area, yet the area itself is scaled perfectly to be functional and not overwhelming. It’s accented with a rawhide rug and white leather chairs.

A beaded, steel curtain hangs from the ceiling of the engagement area, surrounding and calling attention to the 12-foot-long try-on table, the centerpiece of the sunken room. Deep blue, floor-to-ceiling curtains create a richly dramatic backdrop.

Customers can watch what’s going on in the shop through a specially designed window.

Pitts based her drawings on Klos’ vision of the experiences people would have in his store.

One such experience is the ability to try on rings.

Most of the cases in the engagement ring room are completely open, stocked largely with prototypes made of silver and cubic zirconia, so that it’s easy for shoppers to try on one ring after another. Klos knew the feature was important, but he didn’t realize just how naturally women would gravitate toward the ring display.

“At first, I thought customers would say, ‘Can I touch it? Can I try it on?’ But they never say that. They just start playing!”

Klos broke with tradition on other details as well, choosing cases 7 to 8 inches taller than standard, so clients don’t need to stoop to see the jewelry. He wanted the cases to be clean-lined, functional and attractive, without having them steal the show or bust the budget.

“I didn’t want to lose focus from the jewelry.”

For the in-case displays, Klos and his design team worked with Alex Velvet to incorporate rich earth tones into the main cases and a rainbow of brighter colors in the engagement ring center to complement the tumbled marble counter and cases.

The June 2013 grand opening was the talk of the town for months.

About 150 invited guests walked the red carpet, posed for photos in front of a Hollywood-style backdrop and sipped champagne. They watched aerial acrobats hang from the ceiling Cirque du Soleil-style. A singer dolled up as Marilyn Monroe sang Diamonds Are a Girl’s Best Friend, and a chauffeur shuttled out-of-town guests in a 1965 Rolls Royce Silver Cloud.

“We have learned not to fear change because we see it as an opportunity to embrace,” Klos says. 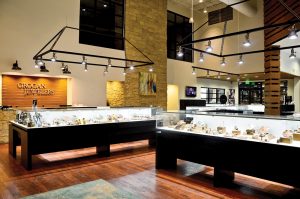 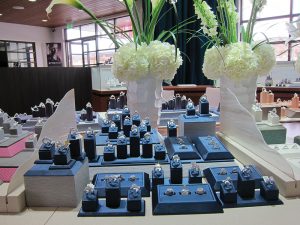 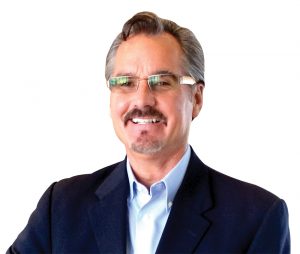 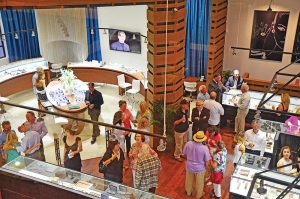 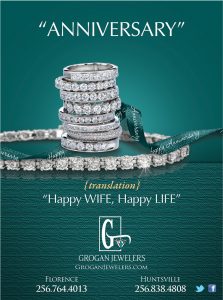 1. IT’S ALMOST A SECOND HOME. Klos’ new second floor office is five times bigger than the office in his old, downtown location. It also has a shower in his en suite bathroom. It’s a time-saver: “I go and run or work out down the street, come back here, change, shower and I’m ready for work.”

2. IT’S GOT STYLE. When customers purchase an engagement or anniversary ring, they are chauffeured to deliver the ring in a white, vintage Rolls Royce.

3. IT HAS A PATIO. Grogan was designed with a spacious outdoor courtyard that has been outfitted with a tent for special occasions such as wine tastings, art shows and the store’s grand opening.

4. IT HAS TEAM SPIRIT. The whole team rallies together to throw a themed birthday party for each staff member — a “hoedown” for Klos, for example — that captures the spirit, heritage or special interests of the individual. When it’s not their birthday though, co-workers show no mercy; staff members are likely to fall victim to a practical joke!

5. IT OFFERS AUTONOMY. “I give my people a lot of rope,” Klos says. “They either hang themselves with it, or they take it and go. They know that we do whatever it takes to make a customer happy, and they can make any decision, big or small, to make that happen. It gives them ownership in the company when they are allowed to do that. People won’t be creative if they are micromanaged.”

Jay Klos recommends checking out two or three locations at a time. “Don’t zero in particularly on one because it may not work out and you need to have a second and third choice in case the deal doesn’t go the way you want it to go. We looked at four other spots that we thought we wanted, tried to negotiate a deal and none of those worked out. Then this location became available, which was the best by far. Don’t get married to one location.”

David Brown:  This is indeed an innovative store committed to “change or die” philosophies and a fun team culture that should see them stay ahead of the game.

Danny Clark:  Grogan’s has clearly built a defined experience for the customers.

Andrea Hill:  I love the open jewelry area where customers can explore the jewelry without a salesperson. In fact, every possible detail of customer comfort — from the leather chairs and sports TV in the men’s lounge to the playful use of lights and music throughout — seems to have been considered in the redesign of the store.

Heather Hanst:  Grogan Jewelers sets a high bar. The story of their grand opening in 2013 with a red carpet and live acrobats takes the cake!

Bob Phibbs:  I loved the open oval counter and guys area. I especially enjoyed the pray for rain ad — very clever. Sounds like they are doing many, many things right. Kudos!

Natalie Bos:  No detail was overlooked with Grogan’s build, everywhere from the parking lot to the bathrooms were included in the design process. That attention to detail is a good indicator of the superior level of service one can expect from the staff at Grogan’s. One of my favorite facts is that the staff throws themed parties for an employee’s birthday, how cool is that?

Related Topics: Grogan Jewelersjewelry stores in Alabama
click to Comment(Comment)
Up Next

I Am a Late Bloomer with a Penchant for Pink