The President’s motorcade is now part of the business's regular drive-by traffic.

THE STORY OF WASHINGTON, DC, is the story of proximity to influence, and in 2005 Mervis Diamond Importers edged a little closer to the center of power with a move to the corner of 17th and K Streets, just blocks from the White House.

While just a hop, skip and a jump from their previous address on L Street, the jeweler made a big leap in terms of market positioning. Indeed, it now counts the President’s motorcade among its regular drive-by traffic.

“Over 16,000 of the city’s most powerful attorneys and lobbyists work up and down K Street. Not only are they walking distance to visit on their lunch hour, but we felt there was an added prestige in having a K Street address,” says Jonathan Mervis, VP of market development.

To match their new power location and to cater to their specific local audience, the Mervis family laid on the luxury at their new store. The tone is set by a shimmering entrance that took inspiration from the company’s distinctive black ring boxes, and features a black granite floor studded with mica-composite sparklers and black padded walls. Just inside the front door, the main showroom is dominated by four floor-to-ceiling museum towers. Peering into the towers, customers can ponder a $50,000 diamond necklace or one of the store’s other large drool-inducing pieces.

“When you walk into the space, you immediately see the spotlights on the diamond jewelry. We wanted to evoke a sense of awe and inspiration for something magical,” says Ronnie Mervis, who owns the business with his brother, Zed.

“Clients perceive a clear message,” adds Jonathan, who is Ronnie’s son. “This place is different. It’s luxurious. Ten minutes ago you may have been in a Congressional meeting deciding the future of our country. Now you’ve stepped into another world. You are a powerful person and you deserve elite luxury.”

In another seeming nod to the way things are done in Washington, most of the sales are conducted behind closed doors in small offices away from the main sales floor. Indeed, the display area at the front is kept to a minimum with the private viewing rooms taking up the majority of the space at the store. The result is a “concierge-type scenario,” says Jonathan, with the salesperson sitting down with a client in a comfortably appointed room and running them through an enhanced four-Cs education, and then when the time is right, bringing out product from a vault in the back room.

“The intention is to focus on building relationships and trust. With the right quality and pricing, the diamonds sell themselves,” says Jonathan.

The education-heavy model works particularly well in DC, he says, where many of the store’s clients take pride in their smarts.

The salespeople, all of whom have GIA credentials, are given a lot of freedom to manage sales as they see fit, with the power to place special orders, handle financing arrangements, and oversee repairs for clients. “In this way, our salespeople are entrepreneurial and really own a client and sale from beginning to end,” says Jonathan.

The sales process has its origins in the early days of the business: Ronnie and Zed, recently arrived from South Africa in the late 1970s and looking to pursue careers in law and accounting, respectively, found they could make some money on the side doing diamond deals, sourcing goods from their family contacts back in Johannesburg. Those deals grew into a second-floor retail space in Washington, as well as two other modestly appointed stores that reflect their particular markets in Tysons Corner, VA, and Rockville, MD, and finally the uptown moves to L Street and then K Street.

Through it all, the focus has been on one-on-one transactions with lots of education, and the store now has a database of thousands of clients that it keeps in regular touch with. Among them are a number of high profile Washington entities (although being DC, the store’s celebrity clients tend to run toward the cerebral rather than the good looking, meaning Supreme Court justices, congressmen and media personalities.)

“They are looking for quality. They don’t want to be sold, they are shrewd, and they know how to negotiate,” Jonathan says of the store’s typical customers. In a place that has such a transient population, they also appreciate a family business with history in the city, he says.

The often temporary nature of the city’s population works for Mervis in other ways as well, with lots of young, college-educated professionals moving into the area to pursue careers, and a constant flow of workers on short-term, usually government-related contracts.

Overall, it adds up to the perfect market for a diamond retailer with the right connections, and the right address. “We couldn’t be in a better place, at a better time,” says Jonathan. 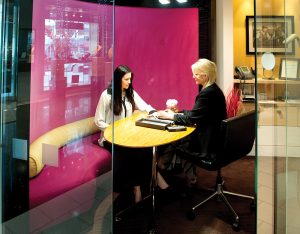 1. IT’S SAME-SEX FRIENDLY. Mervis has done well with the gay market, something it attributes to a “Coming Out” party the store held months before same-sex marriage became legal in the district. “(Same-sex couples) know we’re gay-friendly and that we stuck our neck out to support the community, and they have rewarded us for that,” Jonathan Mervis says, adding that gay customers are very loyal and often willing to spend large sums on engagement rings.

2. IT HAS CONNECTIONS. Ronnie and Zed Mervis originally came to America to build new careers distinct from their family’s jewelry business, which was founded in Johannesburg in 1935. But their knowledge of the diamond industry and connections created a business opportunity that was too good to pass up. Zed was the main buyer, often sourcing diamonds from visits to mines, which translated into great deals for their buyers in America. Ronnie, meanwhile, was the voice of Mervis in ads that became a fixture on the town’s airwaves. He became so well known that a competitor tried to copy his South African accent, says Jonathan. The store now reaches beyond Africa to source its diamonds, but touches such as wooden elephant figures and safari-themed wall prints remind customers of the family’s origins.

3. IT ranks high. Type “diamonds” and “DC” into Google, and Mervis Diamond Importers will invariably show up as a top search result. Mervis’ Internet marketing isn’t designed, however, to sell goods online. Rather, it is to bring customers into the store. “What I love about the Internet is that everything is measurable, and the feedback is almost instantaneous,” says Jonathan Mervis. The company knows how long visitors watch its educational videos — 12 minutes on average, how many people looked at its opening hours page and what percentage created a wish list. It has also had success with “remarketing” campaigns, which post ads on visitors’ computer screens following a visit to mervisdiamond.com.

4. IT’S MEDIA-SAVVY. Jonathan Mervis says he takes it personally when someone unsubscribes from his email bulletins. As the executive responsible for social media, he goes the extra yard to ensure the store’s offerings are tailored to meet its clients’ interests. “A 29-year-old is a very different person from a 65-year-old. You can’t send them the same message,” he notes. The store’s success with social media can be seen in its numbers: Several of its 70-plus YouTube videos have attracted over 34,000 views, its chatty, fun Facebook page has more than 8,000 followers, while its Pinterest board draws thousands more.

5. IT’S CREATIVE. Back in 2009, when cupcakes were all the rage, the store put on a “Cupcakes and Wedding Rings” trunk show, headlined by the “world’s most expensive cupcake,” a creation Mervis came up with in collaboration with a local bakery.

When the Mervis family opened its new space on K Street, it hired live models to stand in its windows and show off its jewels, drawing crowds around its windows for weeks. “We had moved from L Street to K Street for increased exposure and that’s exactly what we received,” says Jonathan Mervis.

Heather Hanst:  Mervis Diamond Importers has a impressive online presence. Their website has educational materials to help customers choose a diamond that suits both their taste and their budget. We also appreciated the story of Mervis’ Coming Out Party in support of their same-sex customers. And we’d love to see those sparkly, mica-composite floors in the D.C. store!

Danny Clark: Mervis’ marketing ideas jumped off the page — from cupcakes (who would have thought?), to live models; and from building a store that caters to the market, to the ability to catch a local news story and turn it into a win. Bravo!

David Brown: The private viewing rooms are bold and modern and certainly add a point of difference. The store could be intimidating to less powerful or elite consumers … but I don’t think they care, which is cool because they know who they are, and who they are not.

Bob Phibbs: I love the museum towers to engage shoppers to browse and be taken to another place. Loved the narrative as well. So very smart to create the Coming Out event.

Natalie Bos: Mervis definitely stands out from other jewelry stores solely in the way it does business. I think their unique philosophy of working one-on-one with clients in private rooms is a smart and highly personal way to sell jewelry. What’s more, the private rooms are brightly colored and uber chic with the glass panels. The minimalist design of the cases keeps the customer from being overwhelmed by too much to choose from and keeps the customer’s focus on the jewelry rather than busy decor.

Andrea Hill: I love the private viewing/private jeweler approach to the store. I can see where some people — not knowing what to expect — might be intimidated or put off by it. But to the correct target customer, this would be a lovely experience. I think the promotion with live models wearing diamonds in the windows of their new store was very cool, and I can see where it would get attention. Grabbing and keeping the loyalty of the gay community is not only cool, it’s smart.

Pandora to Roll Out Lab-Grown Diamonds in North America