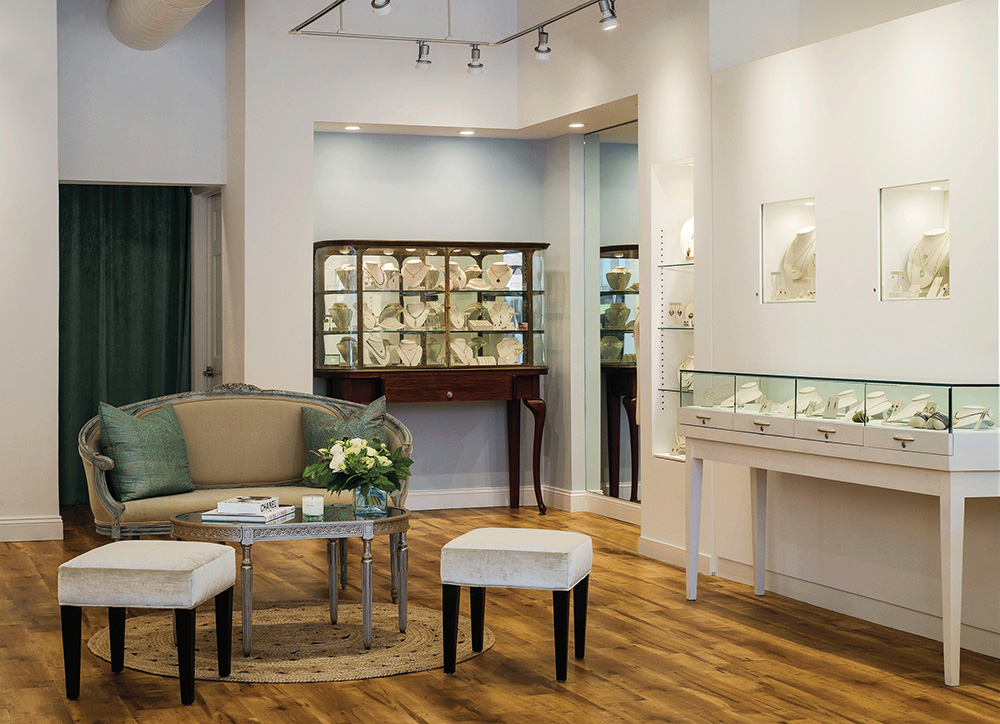 AMONG LEGIONS of would-be doctors, teachers and police officers, Dawn Hendricks’ childhood ambitions didn’t quite match her classmates’: “I was always the weird kid who wanted to have her own store,” she recalls.

She sidelined those retailing aspirations for more than a decade into her career, first working as a photographer, and then starting her own visual merchandising business. During a visit to the New York International Gift Fair to hunt for props, she found jewelry instead. “I met artists doing incredible handmade work that I really wanted to wear.” During their very first conversation designer Anne Sportun advised the novice to open a boutique: “She was very encouraging and told me having a store was ‘no big deal’ then gave me tips like ‘women buy more earrings than necklaces,’” says Hendricks, with a laugh.

Suspecting that the task would be slightly more complicated than that, she continued to do her homework and took a job in the designer jewelry department of a nearby Neiman Marcus. Says Hendricks, “I had to find out if I knew how to sell.”

All the while, she investigated retail spaces near her home in Larchmont, NY, a prosperous town of colonial houses and white picket fences about 20 miles north of Manhattan. Peridot Fine Jewelry debuted just in time for Mother’s Day weekend in 2002. At first the store stocked just a handful of independent designers, like Caroline Ellen and, of course, Anne Sportun. The 700-square-foot store’s arrival was greeted with an “enormous flood of people,” Hendricks says. “There were other jewelry stores but they were much more traditional, so there was a place for us.”

Peridot’s success was due, in no small part, to help from Hendricks’ husband, Chuck. A luxury brand executive with operations experience, he helped build the space and implement administrative systems, including inventory management software — a rarity for small businesses of the time — from the start.

Hendricks had a clear vision of the jewelry she wanted to sell. “We always feature jewelry with the integrity of a handmade product — especially American-made design — even if it’s under $100. Brick-and-mortar stores survive by creating special experiences with unique curation,” she explains. That curation process includes meeting personally with each designer. “I can’t support and sell jewelry unless there’s good energy behind it.” It also requires a delicate balance stylistically: “We want to show what’s new and fashionable, but we can’t be so runway that it’s off the wall.” Her formula mixes of-the-moment ear climbers from Jacquie Aiche, rock crystal amulets from Temple St. Clair and boho cord and gemstone bracelets by Brooke Gregson.

Last August, Peridot radically increased the size of its Larchmont location when it moved to a storefront adjacent to the town’s commuter rail station and on the main thoroughfare. At the same time, Hendricks shuttered a second store she’d opened in nearby Greenwich, CT, eight years earlier. Its lease drew to an end as the larger Larchmont space became available and she used the opportunity to create a hub for Peridot’s marketing, social media and e-commerce functions.

The new Peridot resembles its earlier incarnation, but with more breathing room and a large expanse of windows that suffuse the space with natural light. Niches embedded behind a white false wall with sliding glass doors house the work of most designers. (The store’s roster now numbers more than 30.) A mix of curio cabinets and freestanding cases store jewelry, too. Elements with an earthy “farm-to-table” feeling, including a mahogany point of sale and custom-made wooden signs soften the minimalist architecture. And a settee flanked by mirrored tables injects a note of glamour and provides a place to sit while consulting with clients.

Hendricks groups jewelry according to designer, rather than category, theme or material. She insists, “Each collection tells a unique story and should be presented separately.” The only exception to the rule is a new space dedicated to bridal rings at the rear of the store. A collection of vintage pieces shares space with designs from names like Yasuko Azuma, Cathy Waterman and Mark Patterson.

For the first time, Peridot’s office has sufficient space for Hendricks and administrative staff to have desks of their own. Plus, there’s a dedicated area for a photographer to shoot still life images for Peridot’s e-commerce site, which launched in 2009. “We didn’t start selling nationally overnight,” Hendricks says, “but it’s a powerful tool. People come in all the time referencing links from the site.”

Even after working in the same community for more than a decade Hendricks and her team are always making adjustments. “People’s needs change all the time depending on the time of year, or where they are in their lives,” she says. In return for that responsiveness, her customers make an effort to shop with Peridot even though New York City’s bounty of luxury stores is only a 40-minute train ride away. “We’re very lucky. Our clients want to shop local. They know the village’s stores won’t survive without their support.” 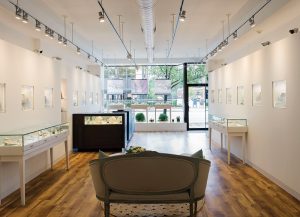 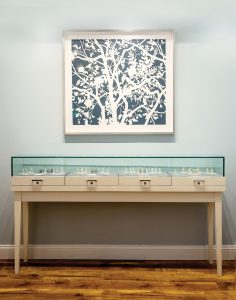 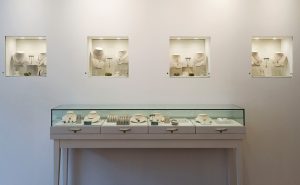 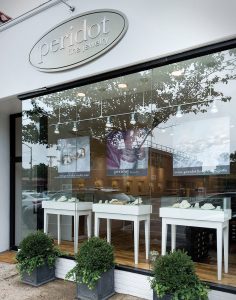 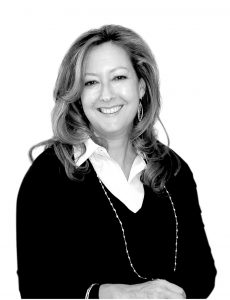 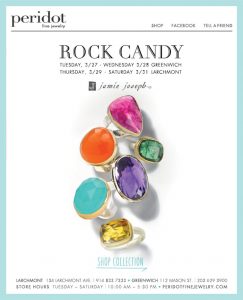 1. LITERARY CIRCLE.  Owner Dawn Hendricks likes to wax poetic. She writes rhyming compositions to celebrate special occasions. At last year’s holiday party she recited a poem with a verse dedicated to each member of her staff. “It’s not every day that a store owner can turn the craziness of Christmas retail season into a three-page rhyme,” according to Peridot’s store director, Melissa Thompson.

2. CHARITY DRIVE.  “We love to support artists of every kind, not just jewelry designers,” Hendricks says. That outlook explains her annual participation in a fundraiser for The Picture House, a local, nearly century-old art cinema. Each year Peridot hosts a one-day pop-up sale to benefit the historic film institution.

3. VISUAL INTEREST.  As construction began on the newest Peridot location, Hendricks commissioned an art student to paint a life-size mural depicting the finished storefront. It concealed the renovation work happening within and publicized the boutique’s impending arrival. The image created such a buzz that it became part of the store’s visual identity, appearing in marketing materials and even at the bottom of email messages.

4. PLAYING FOR KEEPS.  To occupy young visitors — and allow their adult companions to browse in peace — there’s a crate overflowing with books and toys stowed under a display case. The simple diversionary tactic is “a total lifesaver” in the family friendly community, Hendricks says.

5. JUST FOR FUN.  Hendricks wants visitors to feel welcome in her boutique whether or not they’re ready to buy: “We want to create an energy that’s not just about sales. The clients love it.” To that end, she inaugurated the relocated Peridot boutique with a party and plans to host events beyond the regular roster of trunk shows. “It might be a knitting class or a clinic about the process of gem-setting. We’ll see,” she says.

At the start of the holiday season the boutique hosted a Wish List Night. Clients who recorded their most wanted jewelry items received 20 percent off purchases made during the event. The lists simplified gift giving later in the season and created an incentive for on-the-spot purchases, too.

Interest Rates Rise? Be Prepared To Deal With The Ramifications

What I Learned From Harry Friedman About Sales Meetings

Helping Retailers Understand How Innovation and Technology Can Aid Sales