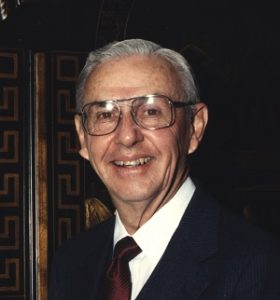 “We are all heartbroken at the loss of this great man, who was so instrumental in shaping the American Gem Society,” said Katherine Bodoh, RJ, CEO of the American Gem Society and AGS Laboratories. “Mr. Woodill was a direct link for many of us to Robert M. Shipley himself. But beyond that connection, the legacy he left on our association is immeasurable.”

More from the AGS’s tribute:

In 1947, Mr. Woodill took over as Robert M. Shipley’s successor. Woodill, a California native, and nephew of Mr. Shipley’s wife, Beatrice, worked for the Shipleys while in high school and later at the University of California, Los Angeles, where he graduated with a B.S. in Business in 1946. While at UCLA, he took time off to serve as a bomber pilot in World War II, rising to the rank of captain in the Army Air Corps.

Early in his career, Mr. Woodill traveled with Mr. Shipley selling GIA courses, promoting the AGS and attending Conclaves. Since he knew shorthand, Mr. Woodill would write as Mr. Shipley dictated articles during their many long trips by car.

For 40 years, Mr. Woodill led AGS through its growth in Membership, the Guilds and Member Services, along with the changes in the AGS Diamond Grading Standards, Governance and Education requirements. His quiet but determined leadership guided the Society towards fulfillment of the Shipley dream. He was awarded Honorary Membership by the AGS Board of Directors based on his service to the Society and the jewelry industry.

In 1970, Mr. Woodill received the prestigious Robert M. Shipley Award, an annual recognition conferred upon a member of the AGS for outstanding service to the Society who exemplifies the high purposes, objectives and ideals of the Society. In 1987, Mr. Woodill retired, but the AGS wasn’t ready to say goodbye, and named him, “AGS Ambassador.” Even after his retirement, Mr. Woodill continued to offer his insight to AGS leadership. He made a point of calling each new president of the AGS Board of Directors, welcoming them to their role and lending his advice. Ruth Batson, who was the AGS CEO for 23 years, and later, Katherine Bodoh, also benefited from his wisdom and guidance.

In 2000, Mr. Woodill was honored with the AGS Circle of Distinction, Lifetime Achievement Award.

He last attended Conclave in 2017 in Hollywood, CA. He attended the Shipley luncheon and received a standing ovation from the multi-generational audience, all of whom either knew him, or had heard stories of this legendary AGS treasure.

Lightbox to Offer Lab-Grown Diamonds Up to 2 Carats