I didn’t realize — in the world of jewelry stores — how different what I do is, because I’m in my little bubble,” Noelle says. “I started realizing that maybe this is a little more unusual than I thought.” Before Noelle found her niche as a jewelry designer and creative retailer, she earned bachelor degrees in biochemical engineering, classics and English. She seriously considered becoming a concert violinist and pursued the hobby of competitive Cajun dancer. Among her priorities as a jewelry store owner are artful displays, products in a broad price range that aren’t commodities and education that is neither boring nor condescending. She designs her own jewelry and cultivates the work of other creative designers. The backdrop for her creativity is a light and airy loft-style store with an interior brick wall, and vertical island showcases that encourage a partnership between salesperson and shopper. Above all, her sense of humor is always clearly on display. Things are good in Bozeman (“Our tourism influx is stronger than it’s ever been,” she reports) and her custom-design individuality has led to the development of a national following she will pursue this year with development of an e-commerce site.

See Her on the 10 O’Clock News

1Noelle teamed up with the local downtown association and five other downtown businesses, to produce two slick, high profile TV commercials to air during the 10 o’clock news, a time slot that few small local businesses can usually afford. Because the downtown association is nonprofit, they were able to get a reduced rate, which was split six ways. “During the worst of the recession, the last thing we wanted was to have our historic downtown area suffer and turn into a ghost downtown. As long as our downtown stays vital, I’m going to do fine.”

2In 2009 Noelle announced that she is the bridal specialist in her market. She not only captured a great deal of market share locally by promoting the store that way, she also began to get national business through word of mouth. “So many people come here for destination weddings, so it’s just blossomed.” She also has developed a technique for doing custom and bridal work by phone and e-mail, allowing out-of-town customers to log onto her computer while she is designing their jewelry. “This has led to a second wave of custom work, an unexpected effect of the whole bridal thing.” Finally, she added bridal designers to her roster.

3Noelle overcomes threshold resistance (and lets in fresh air) by leaving Alara’s door open. Chica, a 70-pound golden-doodle, lounges in the threshold, extending an automatic invitation to reach in and pet her. “People are coming in and throwing down a couple thousand dollars just because they wanted to pet my dog,” Noelle says. “It’s a huge ice-breaker. People who can’t manage to be nice for whatever reason, who are cranky or curmudgeonly and can’t speak nicely to anyone on my staff, will talk baby talk to the dog. It gets them in a better place where they will be more likely to buy.”

A Part of the Community

4As a concession to the recession, Noelle began offering free, steel and diamond tension rings to any customer willing to write a short essay about how they want to propose, and show proof of their hard time. Names and details are confidential. For nonprofit organizations, Alara designs and manufactures charms with universal appeal, each designed to benefit a specific local charity.

A Work in Progress

5Alara began as a 300-square-foot store. The most recent expansion dramatically increased showcase space. Noelle emptied existing cases, added new and previously stored cases, and arranged them all from scratch. “It shows you what you can learn from just moving stuff around,” she says. “We kept rearranging (plus sporadic cussing) until it just felt right. We got suggestions from everyone from my husband to first-time visitors to the store as well as long-standing alaraholics.”

1. our best customers. “We have business cards printed up that look just like ours, but with a line for the customer to fill in their name, and their title is printed on them as ‘alaraholic.’ If someone brings in one of these cards with someone else’s name on it, the alaraholic on the card gets a 10 percent in-store credit.”

Tourists of such a nature that they leave their manners and common sense at home. Tourons are a particular class of tourist, not tourists as a whole.

You can hardly see ’em.

Take Your Packaging Out of the Box

“You have to spend money on packaging anyway. It wouldn’t be much of an investment to get packaging that’s going to get people to say, ‘What a cool box! What a cool bag!’ We have three tiers of packaging that correspond to the price levels of the jewelry.”

What the Judges Said 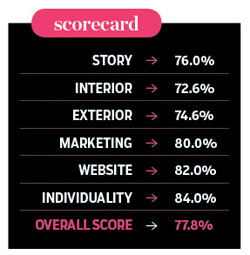 Ken Nisch: Alara has created a sense of down-home authenticity to the sometimes stuffy and pretentious process of buying jewelry. From offering their customers a bit of liquid fortification before making their purchase, to the sexy, but wholesome Mrs. Claus in the window, they are not only willing to “color outside the lines,” but totally redefine the lines that can make a jewelry store an intimidating and fearsome visit.

Kate Peterson: I absolutely love this store!  “Cool” to me is all about staying true to yourself and your brand — and about communicating your vision to your consumer. Babs has raised that to an art form.

Sarah Graham: When it comes to marketing, Alara is pure genius. Babs has a style that is humorous and irreverent but still manages to instill complete confidence — an amazing skill! Alara really is the total package — unique product, beautiful display, knowledgeable staff and an enviably strong brand identity.

Wolfgang Möckel: The store’s tagline, “Dang, we’re good,” certainly works for this nice and creative store. I like their fun approach to retailing which is obvious also in the décor and marketing efforts. I particularly love their “Tell us your Love Story” and other services the store offers to help the community.

Patti David: I think that Babs is the queen of inexpensive, but effective, marketing. She has taken her very hip persona and infused it into the store and her staff as well.

George Whalin: The store splendidly presents its jewelry to customers, but most impressive is Babs’ highly creative, quirky, and fun marketing and promotions exemplifying the lifestyle of people living in Montana.

This story is from the August 2010 edition of INSTORE