IN 2020, ANNOUSHKA DUCAS, who had been designing charms for approximately 30 years, celebrated the 10th anniversary of the launch of her collection under her own name. (Prior to that, she was owner of the famed Links of London with her husband.) To commemorate the occasion, she has created what she calls an “18K gold biography” titled “My Life In Seven Charms.” In March she did a spin-off bracelet for A$AP Rocky to gift to Rihanna with 10 charms. The original collection was based on each client’s deeply personal, memorable and emotional times, as well as hobbies, superstitions and beliefs, telling the stories of their lives in tiny treasures. The first one she created was for herself. I wrote two articles about the collection for different magazines. For bejeweledmag.com, I was able to discuss with Ducas the seven charms that would tell my story to learn more about her process. After asking me several questions, she sketched out what the seven charms would be. They were very much on target, and I only wish I could have stretched my budget to afford the bracelet. Still, for me, the sketch was everything.

When I learned that A$AP Rocky purchased a bespoke bracelet based on this concept for Rihanna with 10 meaningful charms, I thought it was the perfect gift for to represent the memorable moments that have come to pass and are still to come for the couple. It reminds me of the sentiment of the famed Cartier gem set cross bracelet that the Duke of Windsor gave the Duchess of Windsor. Each cross was inscribed with a message that marked a special occasion and one of the jewels that told the story of that legendary couple’s life and a king that abdicated his throne for the woman he loved.

Well, A$AP doesn’t have to give up his roles of rapper, singer and record producer for RiRi, but with this gift, he just might have positioned himself as one of the most romantic boyfriends and thoughtful dads-to-be. 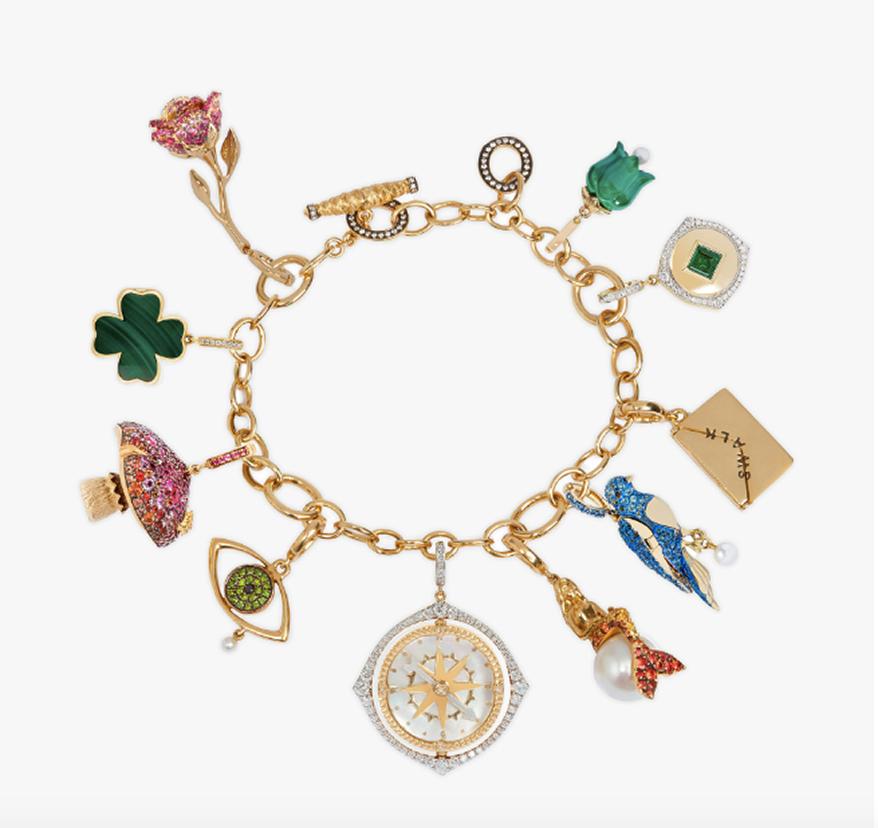 Ducas explains, “A$AP was very keen to know the meanings behind each charm and chose them based on the fact that all represent something imbued with love and happiness and seem significant for the new chapter Rihanna and he are heading into together!” He bought the charm bracelet a week ahead of Rihanna’s 34th birthday in London at the Annoushka concession at Liberty Department Stores. RiRi was spotted wearing it while holding hands with him in Los Angeles toward the end of March.

Ducas explains what A$AP chose and what the charms mean: Lucky Clover for luck, Bluebird for happiness, Mushroom for energy, Tulip for new life, Evil Eye for protection, Compass for direction, Love letter for love (sealed with a kiss), Rose for beauty, Mermaid for fertility and Emerald Lovelocket, birthstone for May. This might be the one giveaway: Since neither has a birthday that month, could it be the baby’s due date? Only time will tell.

The gift of the poignant and sentimental 18K gold and diamond charm bracelet with the gemstone and moveable charms is reported to be valued at $51,991. Each charm can be moved around or taken on and off to be worn on a pendant, but so far Annoushka says Rihanna is wearing it the way in which it was given to her.

“The charm bracelet was one of a couple of pieces bought by A$AP for Rihanna ahead of her birthday last month. He also purchased the Annoushka X Temperley Lovebirds ring and requested the ‘R’ Initial pendant be adapted, so that she could wear it on the chain bracelet as well,” says Ducas.

Rihanna has bought from Ducas before and often wears the company’s signature Initial Pendant (which will now match the “R” on her bracelet).

Ducas concludes: “I love that these 10 charms were chosen for personal reasons and gifted to Rhianna on the cusp of her becoming a mother – I hope they will become special family heirlooms for her children.”

Related Topics: celebrity jewelryFeatured
click to Comment(Comment)
Up Next

Then and Now: Anya Taylor-Joy Brings Back a Look Once Worn by Audrey Hepburn