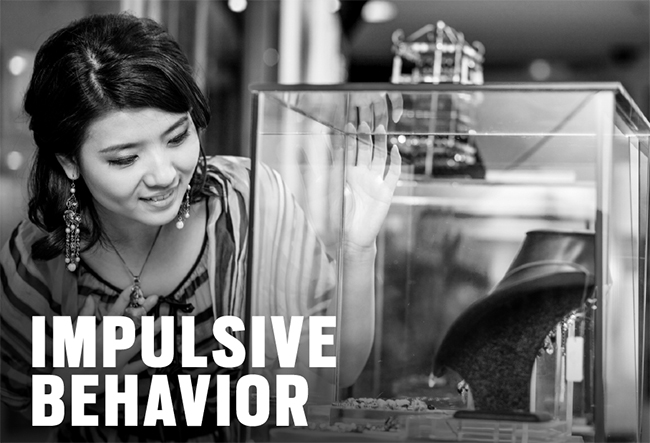 How can I encourage more impulse buying inside my store?

The bait: It is extremely important that the jewelry be in the $50 to $2,000 sweet spot, says merchandising expert Sally Furrer. “Every woman has a dollar threshold where she feels the need to discuss it with her husband or prefers that he purchase it.” You also need the right stock such as fast-fashion goods and branded silver collections. People rarely buy a significant piece of jewelry on impulse.

The trap: “Almost all unplanned buying is a result of touching, hearing, smelling or tasting something on the premises of a store — which is why merchandising can be more powerful than marketing,” says Martin Lindstrom, author of Buyology. This makes a sample or a prototype line that customers can pick up and try a good choice. Store layout is another significant factor. The faster a customer walks, the more their peripheral vision narrows, making it harder for them to pick up visual cues as quickly as someone who is just ambling along. Slow them down with speed bumps such as mirrors and cases with curves. Make it clear too that you love browsers. Plentiful and well-placed mirrors, inviting displays, and an openness that says, “Browse all you want” will remind women of the department store atmosphere to which they’ve become accustomed. A final tip, from retailing guru Paco Underhill: Set stuff up on the right. “This is why airport travelers drifting toward their gate will always find the fast-food restaurants on their left and the gift shops on their right: people will readily cross a lane of pedestrian traffic to satisfy their hunger but rarely to make an impulse buy of a T-shirt or a magazine,” he says. .

A video production company quoted us a five-figure price to do an introductory video to place on our website. Their portfolio is pretty nice but what’s the ROI on these sorts of things?

There’s no doubting the power of an animated image — and much has been made recently of video’s power to drive SEO. But to paraphrase one of the great moving-picture stars, it don’t amount to a hill of beans if no one watches it. As part of the screening for the America’s Coolest Store contest, the editors at INSTORE look at hundreds of store videos. Some (like one by A Jour Jewelry in Bristol, RI, are stunning; others are probably damaging to the store brand, and most are pretty ordinary. The other thing most have in common is that they rarely have more than a few hundred views. To be sure, there are stores that do very well with video. Mervis Diamonds in Washington, DC, has posted a series of very simple videosxproviding advice on how to buy a diamond that have attracted hundreds of thousands of views. The other thing to keep in mind about video is that as powerful as it can be, it’s also pretty cumbersome, and should not be considered as a replacement for text. Unlike text, a visitor to your website can’t scan it quickly and zero in on titles and links to get where they want to go. Definitely experiment with video but for most stores, the return on investment and effort is minimal.

I was thinking of doing a diamond-cutting event. Do they still bring in the crowds?

There is a feeling among some marketers that they can be a bit slow for attention-challenged millennials but as with all events it really comes down to the effort you put into drumming up excitement among your customer base. Laura Stanley, owner of Stanley Jewelers Gemologist in North Little Rock, AR, held a very successful event last year at which Mike Botha from Embee Diamonds cut and polished an 8.52-carat diamond found at the nearby Arkansas Diamond Park. “You have to do the hard work to get people in the door,” says Stanley, but “once they see it in action they are giggly with excitement and very grateful for the opportunity to watch this mysterious process live.” Evert Botha, COO of Embee Diamonds, said the Stanley Jewelers show was one of several they did in a string of stores from Arkansas to Massachusetts. “At (some) of these jewelers, we had an incredible turn-out. The rest of the retailers we visited were relatively average and low-key,” he said. In addition to the marketing benefits, Evert says the events are a great training vehicle for staff.