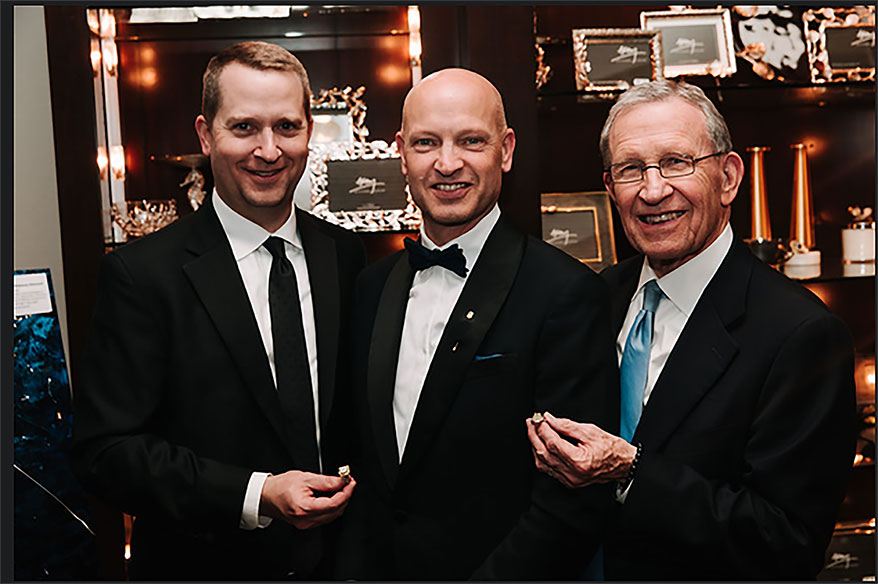 Mitchell Clark, Coleman Clark and Jim Clark display the Heart and Sol of Oklahoma. At right, before the gems were unveiled, gala guests viewed films about the diamond and the design process in an atrium setting inspired by Van Gogh’s “Starry Night.” Photography by Ryan Magnani

WHEN COLEMAN CLARK, CEO of BC Clark Jewelers in Oklahoma, began his search for the perfect, oversize diamond, he did not imagine it would take six years to find it.

It needed to be worthy of the title, “The Heart of Oklahoma” and intense yellow to symbolize the colorful sunsets of the plains. Even more exclusionary, though, he wanted it to be internally flawless.

“I would go to the diamond sections at the shows and see some stones that were not quite the right shape or the intensity of the yellow wasn’t what it should be,” he says. “Or it was too small or a little too big. Just when you’d think it was going to happen, you’d find something wrong.”

Eventually, Clark decided to search for the right piece of rough, one that was just mined and would be specially cut for them to 18.92 carats, to represent the year the company was founded. And, after six years, he got the call he’d been waiting for. In 2018, a 38.05-carat rough diamond was discovered at De Beers’ Debmarine mine off the coast of Namibia, Africa, and was sent to Julius Klein Diamonds, which had partnered with Clark in the diamond search.

Its origin story adds to its allure. “A lot of people don’t realize that diamonds are mined off the ocean floor. This story builds some intrigue into natural diamonds,” says Clark.

The internally flawless, fancy intense yellow diamond was specially cut for BC Clark. The rough also yielded a fancy yellow radiant-cut diamond of 5.01 carats, which BC Clark named Sol, the Spanish word for sun. Together, the diamonds are known as the Heart and Sol of Oklahoma.

Then there was the matter of the setting. After some deliberation, Clark and his team chose Harry Kotlar, with whom the Clarks had worked for 30 years. Harry Kotlar’s handmade, Old World craftsmanship fit well with the story of the diamond’s journey and BC Clark’s longevity. “I can’t say enough about how they poured their hearts into this whole project, even the design of the ring. They went through our history and found things that are important to our history and to the history of Oklahoma.”

Because Purcell, OK, where the company was founded, was a railorad hub in what was then Indian Territory, the Heart of Oklahoma Diamond was set in a ring with a geometric design reminiscent of a steam locomotive’s pilot grills with the use of tapered baguette diamonds. Harry Kotlar designers also built a round disc into the design to symbolize the railroad’s turntable.

The diamond’s red-carpet debut event in November at the downtown Oklahoma City store drew 200 invitees, including top clients of both companies and media representatives.

”What I thought Harry Kotlar brought to the table in a marketing sense was the ability to create a unique event that was going to mean a lot,” Clark says. “Every detail about the event they curated and came up with themselves.” Harry

Kotlar’s idea was to turn an atrium that connected BC Clark’s showroom and corporate offices into a theater with blue lighting and stars projected onto the ceiling. Guests viewed two short films, one about the diamond itself and one about the design of the setting.

The lighting gave the space a dreamlike atmosphere, inspired by the Vincent Van Gogh painting “A Starry Night,” says Czarah Cabrera, brand director for Harry Kotlar.  As a surprise element, a ballet performance was incorporated into the diamond’s dramatic reveal. After the curtain opened on the ring, the lights shifted from deep blues to vivid yellow hues to reflect the diamond’s color.

Guests were given a behind the scenes look at the design process of the ring as well as the opportunity to create their own custom pieces with a Harry Kotlar illustrator on site. There was also a museum-style exhibition of Harry Kotlar’s iconic collections including its hallmark design, the Artisan Pavé, the Kotlar Cushion and jewels worn on the red carpet to reflect the brand’s history.

The best part of the night, as it turned out, was spontaneous and driven by excitement over the diamond itself, which was displayed in a vitrine after its dramatic unveiling. “Somebody wanted to try it on, and suddenly, everyone was lining up,” Clark says. “So we let people try it on and take pictures of it. And their eyes would just light up.”

Initially, Clark wasn’t sure whether the diamond would be sold or kept as a museum piece. “But in the end, we are a retailer and that’s what we do.” The client who did buy it had been interested from early on, sparing Clark the dilemma of deciding who he would sell it to if there were to be a competition.

Overall, the hoopla boosted sales of large diamonds. In fact, sales over $20,000 doubled last year. “We had an increase in big-ticket pieces,” Clark says. “Part of that had to be attributed to getting into people’s minds that we sell big diamonds and big important pieces. We sold more yellow diamonds, too.”

BC Clark is the oldest business in Oklahoma under the same family ownership. Clark and his team strategize about balancing that history with the desires of modern shoppers. “We embrace our past and our legacy, but we have to stay relevant, think outside the box, try to be innovative with our products and our marketing,” he says.

Related Topics: big diamondsdiamondFeaturedjewelry stores in Oklahoma
click to Comment(Comment)
Up Next