Four picks from the prestigious Swiss show that should do well in the U.S. market

It is a great honor to be invited as a journalist to attend the Salon International de la Haute Horlogerie (also known as the SIHH), and that fact is not lost on me one bit. This is my second year attending the prestigious event held every year in Geneva, Switzerland, and this time around I was less nervous, less lost, and even more impressed at the novelties and releases being introduced by the participating Maisons as well as the independent watch brands exhibiting in the Carré des Horlogers.

Below, I’ve listed four watch picks that wowed me in a variety of categories, and why I think they’ll be standouts for U.S. retailers for 2018.

BEST DISPLAY OF THE CONTINENT OF ANTARCTICA

The original category here was going to be “Best Watch I Did Not Drop” because – I’m embarrassed to say – last year during Greubel Forsey’s press presentation, I experienced a “whoops” moment with a roughly half-million-dollar timepiece. I’m happy to state that this year, however, none of the watches I touched hit the floor.

Watch brand Greubel Forsey’s new “GMT Earth” novelty provides an unprecedented 360-degree view of the planet Earth showing the sphere in its entirety from the North to the South Poles. The GMT Earth enables a clear view of three different time zones simultaneously and within a quarter of an hour. Not only is the watch innovative beyond measure and not only is it made by two of the most well-respected and well-liked watchmakers in the world today, it’s one heck of a good-looking timepiece, as well.

BEST WATCH TO WEAR WHILE DRINKING A SKINNY LATTE

If calorie counting is your gig or you live by the mantra, “thin is in,” then man, has Piaget got a watch for you!

The Maison released its record breaking “Altiplano Ultimate Concept,” developed by the Piaget Research and Innovation division. The watch made waves at the 2018 edition of the SIHH for becoming the world’s thinnest mechanical hand-wound watch at just 2mm thick. Want to know just how thin that is? If you take a one euro coin and measure its thickness, it comes out to 2.33 mm. This watch… this mechanical timepiece… is thinner than a euro. That’s mind blowing. To think that a watch like this doesn’t contain a quartz movement absolutely baffles me. However, I do suggest not wearing it to CrossFit. 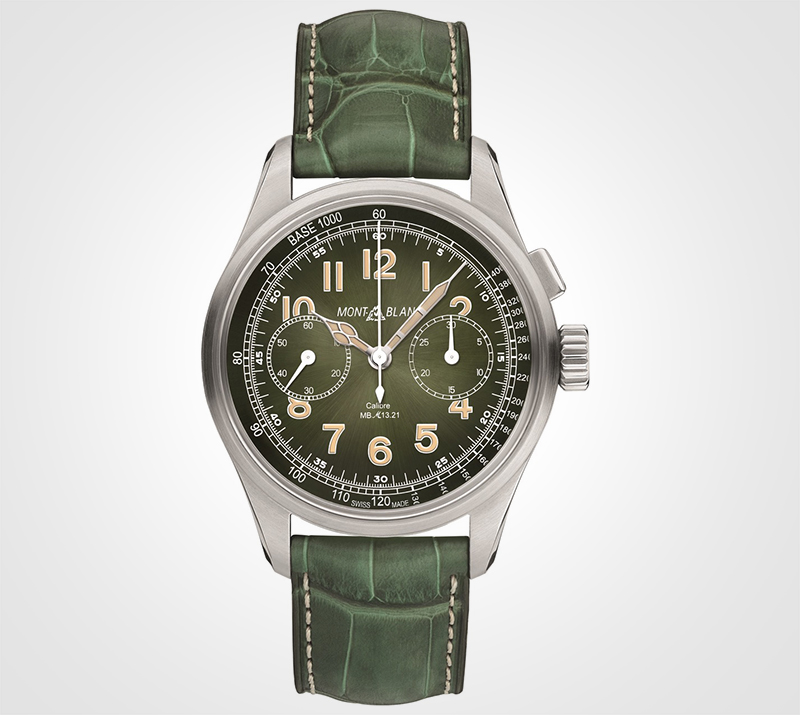 BEST USE OF GREEN SINCE HAL JORDAN WAS CREATED

(I threw that comic book reference in for our beloved Trace Shelton.)

Montblanc has quickly become one of my favorite, affordable watch brands. Though I guess “affordable” is all relative when one thinks about it, right? What I can afford, my kids’ babysitter likely cannot. What Bill Gates can afford, very few others could. But Montblanc is hitting a price point that makes them popular not only amongst buyers like me who needs their purchases to fall under five figures, but also for millennials who maybe are just starting their watch collections.

The Montblanc 1858 Monopusher Chronograph Limited Edition 100 in 40mm is a fantastic-looking timepiece for all the right reasons. It is a throwback to the vintage Minerva chronographs with a bi-compax dial with small second counter at nine o’clock, chronograph 30-minute counter at three o’clock, and tachymeter scale on the outer part of the dial. And that COLOR! It’s a beauty.

BEST WATCH WITH WHICH TO ENTERTAIN YOURSELF AT YOUR IN-LAWS

Betsy going off about that new lady in her bridge club again? Fear not, because Cartier has done something we’ve never seen before and may never see again, and that something will entertain you for HOURS while your father-in-law goes into detail about his herniated disc surgery.

With the introduction of Cartier’s new Revelation timepiece, the iconic Cartier panther reveals itself in a feat of “magic” through a breathtaking design that conceptually works like an hourglass. In lieu of sand, however, the dial of the Revelation contains tiny gold beads, which, when tilted, map a meticulous trajectory across the surface of the dial, gradually revealing the outline of a panther’s head before eventually falling downward to allow the onlooker to tell the time. To say the room gasped in delight during the Cartier press conference when this watch was introduced would be a huge understatement.

Available in three versions – black, green, or red – the watch features a pink gold case, brilliant cut diamond bezel, and a winding crown set with a diamond, emerald or ruby.

These were just four of the dozens of exceptional timepieces introduced in Geneva, but they are four that are getting a lot of great feedback, and the year has barely even started.

Very Peri: What Pantone’s New Color for 2022 Means for Jewelry