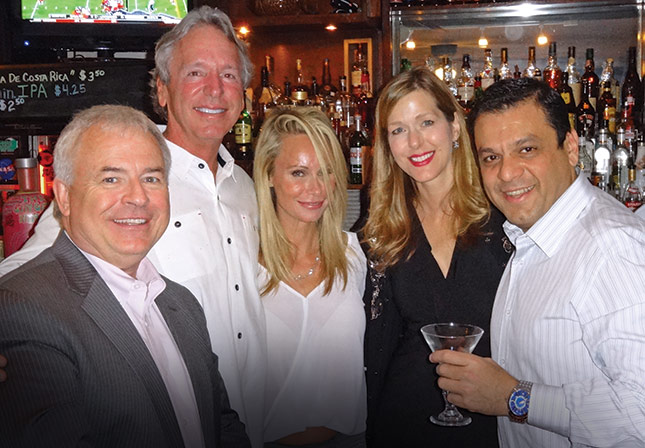 PULLING TOGETHER FOR A GOOD CAUSE
FRIENDLY COMPETITION TAKES TRUNK SHOW TO THE NEXT LEVEL
From left, Long Jewelers team members Jon Walp, David Long, Stacy White and Kim Kellam gather with Bergio CEO Berge Abajian at a vendor appreciation dinner held in conjunction with the trunk show.

OK, the food for the party didn’t show up. Regardless, almost a dozen jewelry designers and plenty of great prizes combined with hundreds of happy customers — as well as one very pleased local charity — to culminate in Long Jewelers’ best Annual Designers Trunk Show to date. “Well, there’s always room for improvement,” says general manager Jon Walp. “But then, I’m very critical. Sales-wise, it was our most successful show ever.” The two-day in-store sale and party has kicked off the holiday season at Long every year for about a decade, but for 2013, Walp changed the formula a bit.

“We just wanted to do something to give back to the community. And we thought, frankly, that working with a charity would help involve more people, and it really did,” Walp says. The store partnered with the Foodbank of Southeastern Virginia, and while Walp has usually had good luck working with the various local media outlets to promote his events, tying this show to the nonprofit took the response to a new level.

Walp made that spirit of friendly competition work for him when he was gathering prizes for the trunk show’s silent auction. “When I’m working with these advertisers, I just blanket email all of them,” he says. One local radio station responded almost immediately with a donation of two round-trip plane tickets anywhere in the continental U.S. “And the others didn’t want to be outdone, so it just snowballed.”

The prize list eventually included a trip to a college football game, a football signed by former NFL defensive end William Fuller, several travel packages including a three-night cruise and more than a few pieces of jewelry, including a pair of 21-carat sapphire earrings from designer Michael M.

“I don’t think we could have gotten the media to help out any more than they did,” Walp says.

A banner for the food bank let customers donate to the charity by scanning a QR code that took them to a website where they could enter their payment information.

The show itself, which ran over a Wednesday and Thursday two weeks before Thanksgiving, drew a strong crowd. “There were times of the day when we were slammed,” Walp says.

The Wednesday night cocktail party for about 500 went equally smoothly — except for the moment of panic when the store realized none of the food had arrived.

“The caterer had the wrong date. The cool thing is, with my staff, I didn’t even have to worry,” he says, explaining the Long team rounded up replacement refreshments before anyone noticed.

The silent auction and accompanying donations raised just under $10,000 for the Foodbank of Southeastern Virginia.
“They were ecstatic,” Walp says. “I think with the prizes we had, we should have been able to get a little more. But it was our first time. It’s a learning experience.”

As far as sales go, the store took in just under $200,000 over the two-day show — a record. So where’s the room for improvement Walp is hoping for?

“We had more people in the store than at any one time ever since we opened,” he says. “But there were also times during the day when it was quiet. I want to make sure it’s busy all the time.”

“Plan well in advance,” Walp advises. Long Jewelers started working with the attending designers early in the summer, during the big trade shows. “Get your liquor license in advance — we’re good at that,” he jokes.

Partner with a charity and get the most out of it. By using the good cause as leverage, Walp was able to get competing media outlets to cooperate. “They actually seem to have a good time working together,” he says.

Keep your vendors happy. Every year, after the second night of the show, Walp and his team take the designers out for dinner at a relaxed local spot that serves high-quality food. “You can let your hair down and tell stories,” he says. It’s helped keep vendors coming back. “They have a good time, and seeing them is a good learning experience for the staff, too.”

Related Topics: Best of the Bestjewelry stores in Virginia
click to Comment(Comment)
Up Next

Best of the Best: Advertise Those Dogs

Josh WImmer has been a contributor to INSTORE since 2006. He has coordinated the annual America's Coolest Stores contest for several years. The job mostly involves pestering jewelry store owners to start their contest entries, pestering jewelry store owners to finish their contest entries, and figuring out computer problems over the phone from hundreds of miles away.