THOUGH SHE’S AN AVID ANIMAL LOVER, Scherri Reimer, manager of Jon’s Fine Jewelry in Cocoa, FL, has always resisted her local  humane society’s attempts to get her to participate in its annual fund-raiser, because she doesn’t like asking people for money. Earlier
this year, however, she finally succumbed once she realized she could outsource the — ahem — begging to someone better suited for it: the store’s mascot, her 9-year-old Yorkie, Toto. — JOSH WIMMER 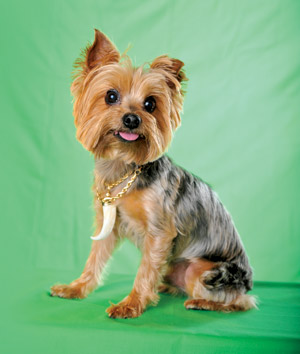 “Toto has come to work here every Saturday since he was 1 or 2. Customers come in, and one of the first things they say is, ‘Is Toto here?’ And we always put him in our commercials, and even though all the rest of us are in them too, people say, ‘I saw Toto on TV!’” Reimer says. When the Central Brevard Humane Society asked her for the umpteenth time to be a part of its big annual fund-raiser, Posh Pets — in which participants raise money by getting people to
vote for their animal, at a dollar a vote — it occurred to her that entering Toto could boost the store’s profile, as well.

“One of my friends made him a very cute little sandwich board that said ‘Vote for Toto,’ and we went to all the stores in our downtown village,” Reimer says. They also collected donations in the store and online; she e-mailed her friends in the jewelry industry, who stepped up. The store put together fliers, sending some directly to clients who are close friends of Toto, and put up a Facebook page. Toto also put in some extra hours for the cause. “He came in a few days besides Saturdays,” Reimer said. “And once people saw his little face and he licked their hand, they gave him $5.” The fund-raiser lasted six weeks, and donors gave anywhere from $1 to, in a couple of cases, $100.

Toto raised more than $3,000, and placed third in the fund-raiser. He also got a full page in the region’s Space Coast Living magazine. “I don’t know that people came in and bought diamonds because of any of it, but our name did get brought up a lot, because when people mention Toto, they mention Jon’s,” she says. “And in the end, the humane society was the winner.”

[li]BUNDLE A promotional opportunity with participation. Jon’s traditionally donates a piece of jewelry —  this year, a $2,500 diamond pendant —  for the Humane Society to auction, but Reimer figured bringing Toto into the mix would draw more attention.[/li]

[li]STAY FOCUSED on the goal of exposure. Rather than have Totofs photos shot at home, as most owners did, Reimer had them taken at Jon’s, surrounded by jewelry.[/li]

[li]A PET CAN work wonders for branding and customer relations. Toto doesnft have free rein to run around. He goes out once a day and comes on the show fl oor only when people ask for him or when children are there.[/li]