WHEN SAMUEL GORDON JEWELERS turned 100 years old earlier this year, third-generation CEO Gary Gordon was waiting by the phone for welcome news. No, he wasn’t awaiting Willard Scott’s familiar centennial ring, but a call from Jewelers of America to learn of his store’s entry in to the association’s JA 100 Club.

Requirements to join the group’s select club are pretty straightforward — prove you’ve been in business for 100 years or more. Last month, Gary and his son Daniel, who will eventually inherit the family business, got the word from JA that they are now indeed members of that very exclusive club.

“Statistics on family businesses show that only two to three percent makes it to this level of longevity,” says Gary. “I’m really very proud. I think back to the times with my father and grandfather in the store and what they did to build this business. It’s a very spiritual feeling”.

The exact anniversary date is unavailable, but Gary says “late January 1904 is the best we can pinpoint” for the day the family business first opened its doors.

Needless to say, Samuel Gordon Jewelers came up with a really big celebration to mark this milestone event. Exactly how big? Their anniversary events spread over 11 months of celebrations, and consumed 80 percent of the company’s yearly promotional budget.

Big events included a Grammy Awards vacation giveaway in March, which Samuel Gordon Jewelers coordinated with a local TV station. Two lucky couples attended one of the most glamorous and celebrated media events of the year, and received a suite of Scott Kay’s “Sterling” jewelry.

Another was the creation of a line of “Samuel Gordon Century Diamonds” — the diamonds in the store’s inventory with the best light performance. To identify these, the Gordons used GemEx Brilliance Scope photospectrometer technology. (The store has rated all of its diamonds using GemEx technology — with 46 earning the “high” or “very high” light-performance ratings required to be named “Century Diamonds”.)

While these events and promotions were important parts of the anniversary celebrations, the company had some coming up with a centerpiece event to mark the campaign.

Then Daniel hit upon the idea of creating Samuel Gordon Jewelers’ “A Wedding to Remember.” Well before the store’s hundredth anniversary, various area businesses had occasionally floated ideas about the possibility of running an interactive-wedding contest with Samuel Gordon Jewelers. So when Daniel suggested the contest be launched as part of Samuel Gordon’s centennial celebrations, the idea quickly gained momentum with local merchants.

Putting most of their promotional eggs in one basket proved to be a shrewd investment. “We received a huge amount of promotion out the event … as did the merchants who participated,” says Daniel.

A Deluge of Videos 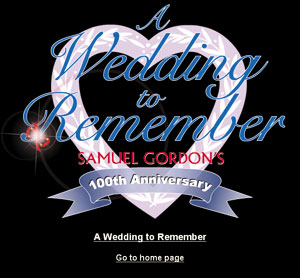 The first phase of the contest began last October, when local couples were invited to send videos in which they shared their reasons why they should win “A Wedding To Remember.” Roughly 2,400 couples submitted tapes. Says Daniel: “It took several days to review all the tapes … we had to go the local police station to use their professional equipment to do it.”

The judges eventually narrowed the candidates to a select few, and then put their videos on Samuel Gordon’s website for a public vote.

With FOX 25 (KOKH) given exclusive rights to promote “A Wedding to Remember” (an event the local FOX affiliate invested $350,000 of additional money to promote) Samuel Gordon Jewelers’ website received over 15,000 votes just to select the couple. In addition, between October and Christmas of last year, the store’s website received 150,000 unique visitors per month.

But it’s not just the store’s online presence that received attention. “This year wedding ring sales are up 14%,” says Gary. “Plus, people who come in our store comment about the event all the time.”

The winners were announced on December 4 — and local couple Dustin Smith and Sarah Jones were the lucky winners of a free wedding valued at $50,000, including perks like Scott Kay platinum jewelry, and a trip to Maui for their honeymoon. The two were scheduled to be married on August 26 in an event that will inevitably garner even more local media attention and publicity for Samuel Gordon Jewelers.

Thanks for the Memories

That same month Samuel Gordon Jewelers held the requisite anniversary sale. For Gary, it was a chance to indulge in even more memories. Says the newest member of jewelry’s “100 Club”: “Many people stopped by … even customers my father and grandfather served.”

Best of the Best: Celebrity Endorsements

How to Improve Your Email Marketing for Valentine’s Day

Fishing for Whales? It Takes a New Method of Clienteling