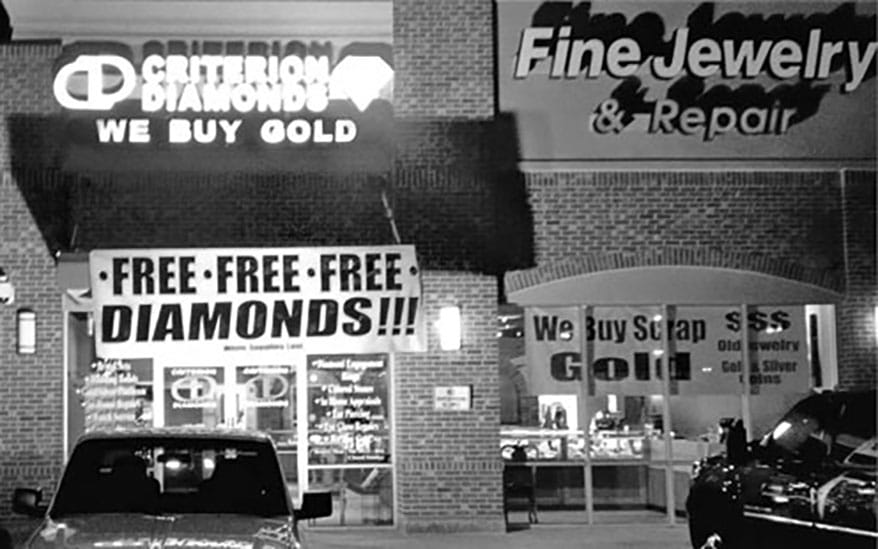 MARK FLYNN, OWNER of Criterion Diamonds in Hiram, GA, decided just days before Black Friday that he’d get a jump-start on 2012 Christmas traffic by giving away free diamonds on Thanksgiving night. Criterion specializes in diamonds and custom bridal; 60 to 70 percent of inventory is made in house. Advertising usually consists of TV, billboards and print ads in community magazines. Although Flynn had tried other promotions over the years, this was the first time he tried this.

“It was a feel-good moment in not-so-feelgood times,” she says. “I didn’t advertise it or discuss it. It made me feel good.” Once in a while, someone would call to thank her, but it wasn’t initially a big promotion.

The rules were simple: “You come in our door,” Flynn says. “We give you one of these diamonds.” The diamonds had an average carat weight of 0.10 and an average retail value of $135 to $140. He planned to be open from 9 p.m. Thanksgiving Day till 1 a.m. Friday morning.

“We just pulled it out of nowhere the beginning of that week, and we went to Walmart to buy floodlights to light up the ‘free diamonds’ sign. I was really shocked at how many people were out and how many people started coming in.”

Initially, they advertised the giveaway with a huge, yellow sign and a twin set of spotlights circulating in the sky over the store. Someone called a local radio station about the event, which in turn called to interview Flynn.
Less than a minute after the station aired the story, a woman who had heard the announcement arrived at the store and collected a .12-carat chocolate diamond.

“The rest of the night was crazy enough to extend our closing until 2 a.m.,” says Criterion Diamonds designer Jeremy Barron. “The following morning, we opened at 8 a.m. and offered our free diamonds and 15 percent off coupons to the customers who had heard our story on the radio.”

Reactions to the giveaway varied. Shoppers were skeptical, of course. They wanted to know, “What’s the catch?”

“Some stayed and shopped. Some just walked in and stuck their hand out,” Flynn says. “I gave them a diamond and a coupon (to use before Christmas) and they walked right back out with it.”

The most common question he heard, was “Why?”

Flynn’s motivation was to try to generate excitement about Christmas shopping in a year that seemed fraught with hesitation. He had noticed a prevailing atmosphere of paranoia and fear before the presidential election. “They thought the sky was going to fall,” he recalls. “Everyone has to pitch in to stimulate the economy; if it has to take free diamonds to get people to get out and spend money in the community, I’ll do it.”

Customers also asked, upon receiving the loose diamond, “What do I do with it?”He told them they could come back and have it put in a setting.

“I gave it my best sales spiel, for sure,” Flynn says. “Some of them asked if I wanted to buy it back!” (He declined.)

In all, he gave away 56 diamonds. His business did pick up that weekend, and compared to 2011, Christmas sales improved noticeably.

In the past, he’s tried other promotions — free catered barbecue, giveaways of small electrical appliances, raffles. “It never really thrilled anyone,” he says. “People like to do raffles, but this way everybody was a winner.”

“I made it optional for them to work on Thanksgiving night,” he says. “My regular staff all volunteered for it and they came in.”

Brainstorm with your staff and don’t be afraid to try something new to usher in Christmas shopping.Enlist the support of your employees by building team spirit. Forcing his staff to work on Thanksgiving would have been counterproductive, Flynn believes.

Related Topics: Best of the Bestjewelry stores in Georgia
click to Comment(Comment)
Up Next