Reward your customers for shopping in your store. Shoppers enjoy special privileges, and that encourages them to return and buy from you again. Five years ago Michael Pollak, co-owner of Hyde Park Jewelers in Denver, Las Vegas and Phoenix, found himself pondering the success of airline, hotel and specialty-store loyalty programs. Why couldn’t jewelers do the same, especially when it meant their customers would likely shop and spend more? It would also present an opportunity to collect more data about customers. “I set out to see if there was a program we could adapt or plug into to serve our needs and perhaps that of other jewelry retailers,” Pollak says.

In 2003 Pollak worked with two firms to develop a feature that would run on Application System Corporation’s point-of-sale software. His retailer colleagues were intrigued, yet skeptical. Pollak persevered, immediately addressing the complaint that it would take too long for customers to earn enough points for a substantial reward if they could obtain points only in the jewelry store. He signed on with a company specializing in affiliate marketing to partner with a network of e-tailers such as Harry & David, Dell and The Sharper Image, so customers could quickly build up points that would be redeemable only at the jeweler they signed up with. Between 1 percent and 30 percent of customer purchases made at one of the affiliates goes to their Platinum Rewards account, depending on the arrangement with the specific e-tailer. Customers still earn points when they shop for jewelry in the store. 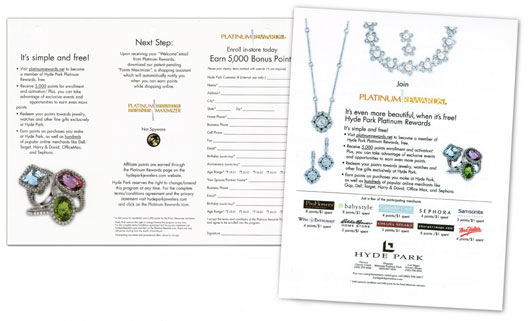 Platinum Rewards or just its web-based data collection service is available to other independents. Several are already on board, including Hamilton Jewelers, Lee Michaels Fine Jewelry, Carl Greve Jewelers, Tappers Jewelers and Lacy & Co. “By the end of 2007, I expect 50 to 100 jewelers to be signed up,” Pollak says.