[dropcap cap=W]hat could possibly draw a crowd to an Omaha, NE, jewelry store on a February evening when the temperature is not just freezing, but 8 degrees below zero? Beer, pizza and a certain degree of panic could if it happens to be the Monday before Valentine’s Day and if the store happens to be Borsheims, which knows how to launch an all-out promotional assault. — EILEEN McCLELLAND[/dropcap] 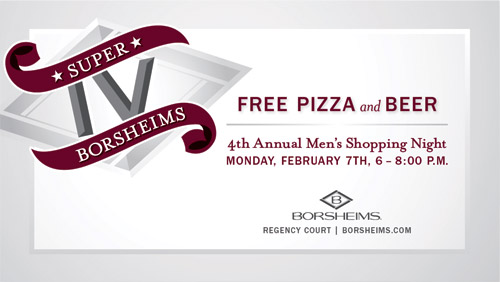 The saddest day of the year, for many men, is the day after the Super Bowl. They are faced with a lack of college or professional football for several months. So what better way to ease the pain than beer and pizza at Borsheims’ Annual Men’s Night — this year on Feb. 7. Men’s night at Borsheims was traditionally held in December, until it was decided that a Valentine’s Day event might be a better business booster. “For Christmas, they were coming in anyway,” says Adrienne Fay, director of marketing and advertising for Borsheims. “We wanted to take a holiday that, while associated with jewelry, we didn’t already have the sales and traffic we could have.”

This year’s event was the fourth annual men’s night on the Monday before Valentine’s Day.

Basketball played on TV screens in the watch department as guys began dropping in after work in groups of three or four. Borsheims’ two bars were open as well as a pizza buffet. The guys tend to shop quickly, then relax while their gift is being wrapped and their payment processed.

Promotion began early, at the end of December, in the form of 10-second slides at three different Omaha-area movie theaters. Everything was designed around a Super Bowl theme and the event was christened Super Borsheims IV. In the same theaters, Borsheims bought space in the movie-poster area. Instead of a “coming soon” movie attraction, moviegoers would see a poster for men’s night at Borsheims.

The marketing campaign also included a radio spot, a newspaper ad on Super Bowl Sunday, an e-mail blast to 25,000 local customers, Facebook advertising and a
Facebook invitation that fans could respond to and forward. Direct mail with a mini-catalog featured a variety of merchandise. Borsheims also advertises on wrist bands that patrons of the Quest Center arena receive in order to purchase alcohol. 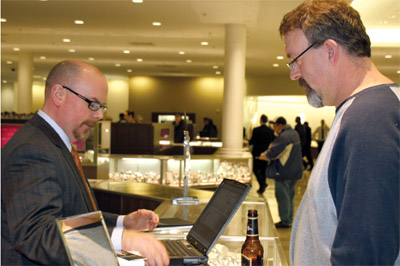 “Our sales increased by 9 percent over 2010 for Men’s Night,” Fay says. “Unfortunately, our traffic was down by 40 percent from 2010. But, I’m always happier with a sales increase.”

Even so, total attendance at the 62,500-square-foot store was 918 for the day com-pared to a usual Monday crowd of half that.

“I think the best advice is to keep it light,” Fay says. “For us, it didn’t matter if they bought something. We wanted to let them think about the next time they need to shop and the fun they had at Borsheims. We keep it really light, encouraging them to eat or watch the game. It’s a very playful approach.”

Find partners: Borsheims partnered with a liquor distributor to create coasters that were given to 25 bars in Omaha to capture the attention of guys who watch the Super Bowl at bars.

Best of the Best: On Kate’s Bridal Train

Best of the Best: Host an Online Trunk Show

How to Make Your Website the Cornerstone of Your Business