See how this Texas store turned a dormant corner into a store cash cow.

[dropcap cap=E]ver wondered what to do with a corner of your store that’s not producing revenue? Donoho’s Jewellers in The Woodlands, TX, had used an  800-square-foot room as a rock and mineral museum. Staff also showed diamond presentations on a TV. Interesting, yes; entertaining, perhaps — but not rich in revenue. — EILEEN McCLELLAND[/dropcap]

Van der Dys says the Scott Kay men’s line was not an arbitrary choice. “We did great business with fashion and watches, but we thought we were missing the boat on men’s jewelry,” he says.

“Because of the relationship we had with Scott we were confident it would work.”

Regina Kay went into the project well versed in Scott Kay’s philosophy of how to make the most of space in a retail jewelry store — lining up cases against the walls and in the center of the room, rather than sacrificing space simply for sales associates to stand behind counters.

The room was already equipped with built-in cabinets lining the walls. Regina brought in a focal point — a case in the middle of the room.

“We were thinking gentlemen’s lair, seduction, mysterious, and all of a sudden it started clicking. It became a place where guys could feel comfortable,” Regina says. 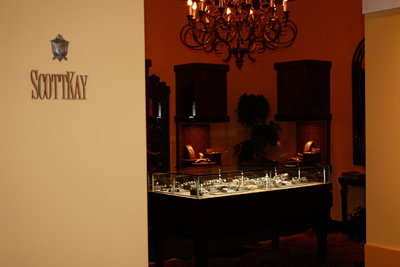 BRAND IDENTITY: Regina says the room provides brand recognition. “It definitely tells a story of who Scott is and what Scott is all about.”

EDUCATION: Rather than suffering from the lack of the plasma TV and seating area, diamond education has improved, van der Dys says, since sales associates present the information to customers, one-on-one now, without relying on visual aids.

• “Take a look at all the things that are already in place and ask yourself how you can transition this into more of a shopping experience. You can change certain areas without demo-ing the entire store.”
• “When working with an interior designer, you have to have a little trust, too. The magic doesn’t come together until all the pieces are in place.”
• “It’s important to reflect the brand. Go to that vendor and say, ‘Help me, support me, I’d like to make your salon successful.’”