[dropcap cap=O]n a Sunday night in December 2009, Ajay Singadia, president of Barron’s Fine Jewelry in Snellville, GA, received a text from regular customer Russell, asking if he could do a custom job for his wife Fran’s 40th birthday. The catch? Her birthday was the following Saturday. Singadia quickly agreed, although the store usually requires three to four weeks’ lead time for custom work. Russell said he’d send a fax with a sketch. Singadia was expecting a routine order. “We are in a middle to high-end income area, but even people with money tend to want very basic things,” Singadia says. “People don’t have really, really big jewelry here.” — EILEEN McCLELLAND[/dropcap]

“The next day I got that fax, a stick drawing of a scepter, and I thought he was joking. Or, I thought maybe he meant doing it as a pin.” Singadia called Russell and asked how large a scepter he envisioned. Russell replied, “about the size of a rifle.” Furthermore, he said, he wanted a silver and gold scepter with gem-grade diamonds, rubies and sapphires. Why did he want a scepter, Singadia wondered. “My wife can be a real pain sometimes, but 95 percent of the time she’s my queen,” Russell replied. How could a jeweler say no to that?

Singadia told Russell it would cost at least $100,000. When Russell didn’t flinch at the estimate, Singadia and jeweler Tuan Nguyen brought in some bedding and began working round the clock to meet the deadline. They had the 6.5mm rubies and diamonds and, as luck would have it, even a silver bar, but had to buy some sapphires.

“We created our CAD model on Monday and we started cutting the wax on Monday night,” he says. “We pulled three all-nighters that week, between me and my two jewelers.” 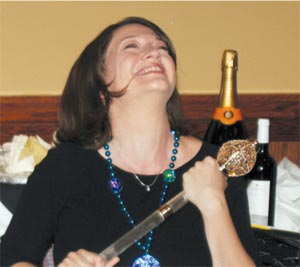 Singadia met the deadline. He delivered the piece to a restaurant at 9 p.m. on Saturday, during the birthday party, and stuck around for a piece of cake and the gift presentation. “There were around 50 people there and he gives her the box. Fran opens the box and immediately closes the box and starts laughing. Then she takes the scepter out and the whole room laughs because everybody thought it was a joke. He knelt in front of her and she knighted him with it.” Then Russell explained that it wasn’t an imitation and that Singadia had created it from a simple sketch. The room went silent. They passed around the scepter and the guests’ jaws dropped.

Since the presentation, Singadia has been able to borrow the scepter for promotional purposes.

[componentheading]DO IT YOURSELF[/componentheading]
[li]Hire dedicated, creative staff members with a can-do attitude. “My jeweler, Tuan Nguyen, never says no.”[/li]
[li] Keep an open mind. “Whatever it turned out to be, we were going to make this happen,” Singadia says. “Our industry gets bored doing the same thing every day.”[/li]
[li] Recognize the value of custom work. “It’s things like this that enable us to battle the Internet.”[/li]
[li] Network. Singadia belongs to four or five business groups, including the Entrepreneurs Organization, where he met Russell.[/li]