WHEN DAVID AND Julia Gardner brought in the Ippolita line to their store in the fall of 2012, they watched the sterling silver and gemstone collection fly out the door. The jewelry was different from anything they had sold before, and it sparked immediate interest in their customer base. They sold dozens of pieces within 60 days. “We had a phenomenal reaction to it,” David Gardner says. The Gardners decided to test the line’s gold and rose-gold plated collections with a trunk show on Nov. 28, before committing to expanding the line’s presence in the store.

David Gardner and guests enjoy themselves.

David Gardner says trunk shows provide the opportunity to see how the vendor works with the store as well as to gauge customers’ reactions to the jewelry. The key to a trunk show’s success is to make sure each one is at least a little different from previous events, since people who come to the store’s trunk shows are a fairly small group of customers, says Tiffany Torregrossa, director of marketing and events. One thing that set this event apart was a style show in which the sales and marketing staff did double duty as models. Boutique owner Charli Light dressed the models with her merchandise, and David Gardner’s staff chose Ippolita pieces to complement the clothes.

For the Ippolita trunk show, the focus was on women self-purchasers. The trunk show began at 2 p.m. and was open to the public. The private event began at 5 p.m. and lasted till 7 p.m.

Customers who had already purchased Ippolita pieces prior to the event were sent $50 coupons that could be used only during the event, as an incentive to add to their collections.

At every event, party planners Julia Gardner and Torregrossa make sure good food and wine are on hand. “Julia and Tiffany throw parties you want to be at,” David Gardner says. 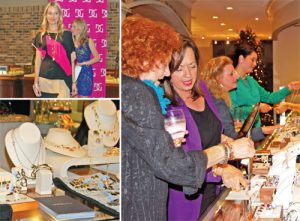 At this one, local celebrity chef Tai Lee, who owns the restaurant Veritas, prepared and served the appetizers, including tenderloin skewers and spinach ravioli.

Entertainment was provided by Ralf & Ciarra, a local duo that has appeared repeatedly at David Gardner functions. The guitarist and vocalist can be enjoyed without overpowering the conversation over the jewelry counter.

Food for cocktail parties should be “two bites” and require “no fork and no plate,” Torregrossa says.
“We spend the most time on the invitation list,” Torregrossa says. “We spend hours and hours making sure personal contact is being made.” They start getting the word out about a month in advance with direct mail, and talking it up in the store, “to get people in the mood to come back to the store.”

David Gardner’s has offered their guests manicures and hand massages at past events, by teaming up with a local salon.

Timing is important, too, Torregrossa says. “Since we’re in a small town, we have to be very careful not to conflict with another event. We like Wednesdays and Thursdays for a trunk show.”For a private event, Torregrossa says, “We like to put the product on top of the cases, because our customers really like to play with the jewelry.”

Advertisement
Related Topics: Best of the Bestjewelry stores in Texas
click to Comment(Comment)
Up Next

Kick Up Your Heels Party