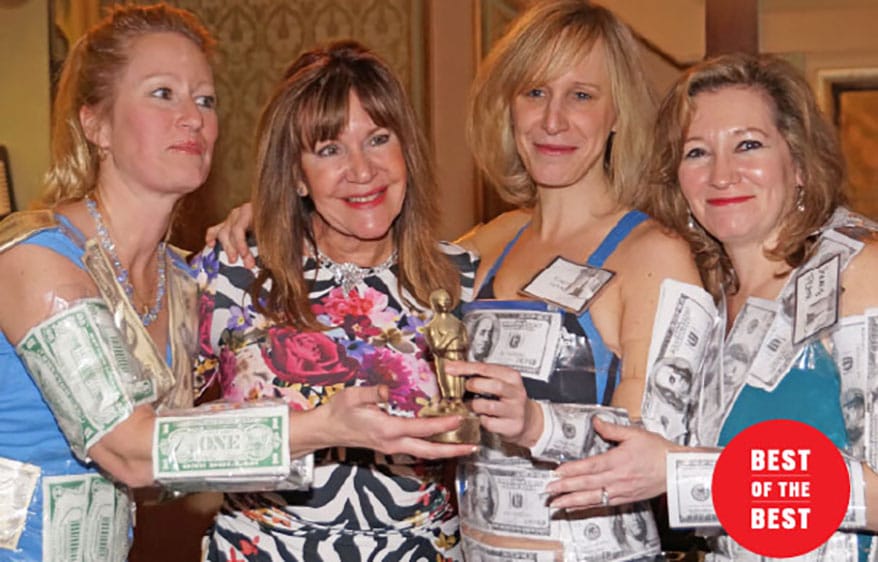 Cathy Calhoun, second left, hands a chocolate Oscar to the winners of last year’s special costume category, who won with their cashed-up nod to The Wolf of Wall Street.

ON OSCAR NIGHT LAST year, Calhoun, owner of Calhoun Jewelers in Royersford, PA, celebrated her 10th annual Academy Awards party, which she describes as one of the biggest events in her local community — second only to her annual “Blob Fest.”

Like the Oscar party, the summertime Blob Fest is held at the historical Colonial Theatre in neigboring Phoenixville— best known for a scene from the 1957 Steve McQueen movie, “The Blob,” in which people ran screaming from the theater to escape a slimy monster.

But at Calhoun’s Oscar party, people are clamoring not to get out, but to get in. The theater has a limit of 650 people, and it’s always sold out.

Calhoun, long a fan of the theater, plans the Oscar viewing party with community volunteers, as a fund-raiser to support the venue, which opened in 1903 for stage performances as well as one-reel films.

She is supported by a volunteer committee of eight or nine people.

“Even our bartenders are volunteers,” Calhoun says. “They love this theater and are really into movies.”

Attendees purchase an annual, $45 membership to the theater in order to attend the Oscar party.

The Oscars — as well as the red-carpet preview — are shown live on a projector in the theater. During commercials, a house band plays and a trivia contest takes place.
Guests are invited to wear black tie, pajamas or movie-character costumes, adding to the festively eccentric atmosphere.

“The pajamas are a riot,” Calhoun says. “I’d say about 20 to 30 percent come in pajamas and robes. A whole family might come in their pajamas and settle into a row.”

Prizes are awarded for each category of attire, and include gift certificates and jewelry from Calhoun Jewelers as well as locally made chocolate Oscars. Other local partners have donated gift certificates and gift baskets. Winners are encouraged to make acceptance speeches, and since they are often tipsy by that time, speeches are likely to be entertaining, Calhoun says.

Last year, she added makeup artists to the mix, inviting audience members to come early, have their makeup done and their photo taken in front of a limousine, parked outside next to a red carpet.

Catered food is provided according to a theme. Last year, moon pies referenced the Oscar-nominated “Gravity.”

The party raises awareness not only for Calhoun Jewelers, but also for the theater, which benefits from the attention and funds. It’s become a mutually beneficial partnership. Calhoun’s store, about 15 miles away, is advertised, free of charge, every night at the Colonial during first-run movies and concerts.

“This has been huge,” Calhoun says. “This takes place in a town I’m not in. I use this theater for so many things; it’s like reaching out to a whole other community. I stated it as something fun to do, never thinking it would snowball into what it has. That’s what works for me — events.
“Next to the Blob Fest, this is the biggest party in town.”

Advertisement
Related Topics: Best of the BestEileen McClellandjewelry stores in Pennsylvania
click to Comment(Comment)
Up Next

How to Respond to Specific Jewelry Requests from Clients, And More of Your Questions Answered