Flamenco dancers performed for 10 to 15 minutes every half hour, leaving time for people to browse.

WHEN LOOKING FOR new lines for their two jewelry stores in Missouri, owners Kevin and Christi Weaver, seek out high-quality, unique styles at reasonable prices. In 2011, around Christmas time, they decided that Jorge Revilla fit the bill.

In honor of introducing the Spanish silver jewelry line to their market, the Weavers decided to throw a party with a Spanish theme. “We love unique events — we invited our customers in for flamenco dance demonstrations, live music, Spanish wine tasting and foods,” Christi says.

Christi learned about a group of local flamenco dancers who combine educational segments with lively, colorful performances. She hired them for separate events in the Kansas City and Liberty locations. The total cost of the entertainment was $500 for both events. The Polished Edge also partnered with the liquor department of a grocery store for a Spanish wine tasting. The smaller store (1,500 square feet) was full, with about 50 people attending.

It was a challenge to accommodate everything going on, but Christi and Kevin made it work. “The dancers needed some room, too. They had to have room to spin around — whirling, twirling, in wide skirts — without running into everyone. “They also set up a wooden platform as a dance floor.

The dancers, accompanied by a guitarist, performed for 10 to 15 minutes every half hour; they also explained the origins and nuances of the dance. The events were advertised via direct mail, ads in local lifestyle magazines and by email blasts, for a total cost of $1,500 to $2,000. 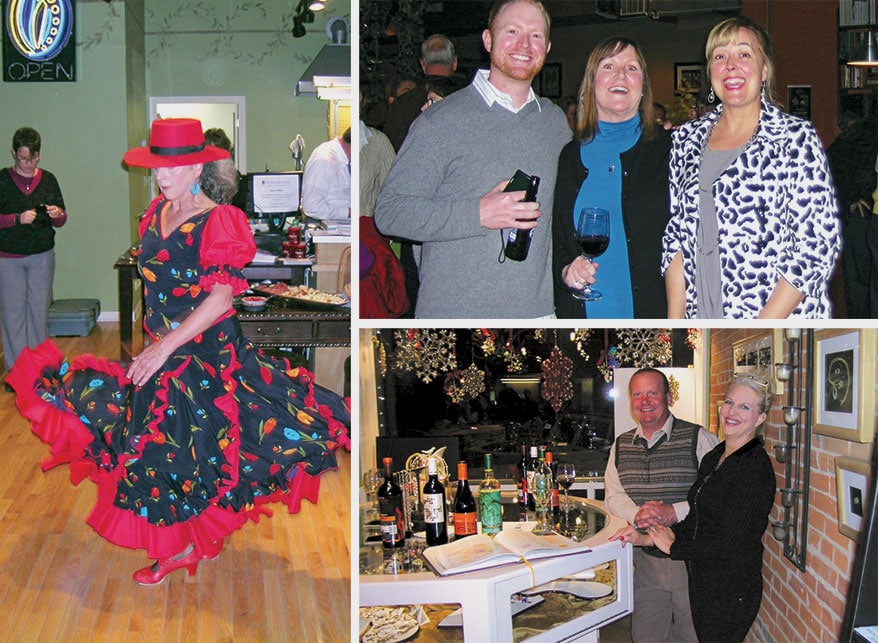 The finger-food menu had a Spanish theme, too, and included bacon-wrapped scallops, cheeses and olives.

At the same time, men are invited to submit entries explaining why they’d like to win the ring and make the Most Valuable Proposal. A three-person panel from the TV station joins Bremer Jewelry’s marketing director to choose the winner, who is notified the Monday before the big game. He goes to the station to tape his proposal, swearing to keep it a secret until it airs during Super Bowl halftime.

On Super Bowl Sunday, a TV crew shows up wherever the winner is watching the game. Last year, the winner and his girlfriend were at a sports bar where they’d met five years earlier. Another When Super Bowl XLVII kicks off in New Orleans on Feb. 3, all eyes will be on the game — and the commercials. Bremer Jewelry of Peoria, IL, scores big publicity points each year with a contest that helps a lucky local couple get engaged live on the air during halftime. STOR Y BY Julie Fanselow year, the winner and his paramour were watching the game at home when his mother let the TV crew in the back door. The camera crew captures the woman’s reaction as the televised proposal airs, then — to build suspense and ratings — the TV station tells its audience to tune in “tonight at 10” to hear her reply.

“PEOPLE REALLY liked it. It was unusual and interesting,” Christi says. “My kids had a blast getting flamenco dance instruction from the dancers. The customers loved the live music and vocals that created a festive atmosphere with real cultural ties.”

All that activity inspired some shopping, too. “We did make sales at the Liberty store,” Christi says. “Pretty much everyone who came in bought something in the $200 to $250 range. We put all the big show pieces and the pieces that really gave a feel for the line on the counters, and then we were wearing them, too.”

The event was more successful in Liberty than in the larger Kansas City store, where other events in the city competed for customers’ attention.

Although representatives of the jewelry line weren’t able to attend, they did send extra merchandise for a trunk-show style selection.

Related Topics: Best of the Bestjewelry stores in Missouri
click to Comment(Comment)
Up Next

Outside The Box: Palladium Collection Launch