Best of The Best: Try One on For Size 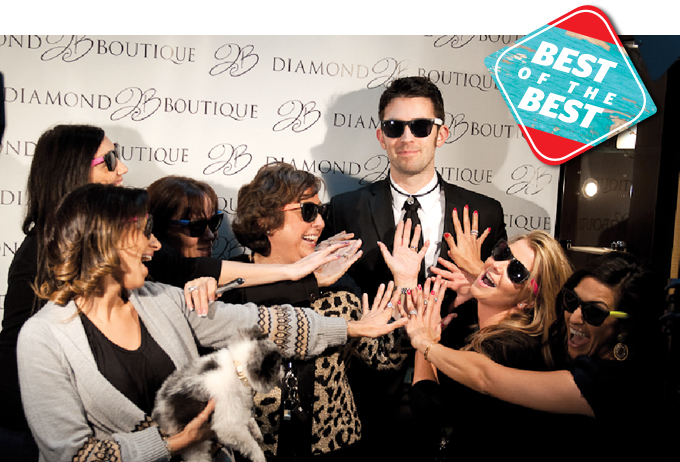 Published in the September 2012 issue

In January, just in time for Valentine’s Day shopping, hundreds of people — each wearing the same 18-carat, $1 million diamond pendant — began posting photos of themselves on the Diamond Boutique’s Facebook page. The promotion, integrated with an in-store event, garnered widespread national attention without any paid advertising and bolstered the store’s Facebook fan base.

SHARE THE SHINE • The Diamond Boutique offered residents of San Diego and surrounding communities the opportunity to try on a round brilliant-cut, near flawless diamond — dubbed The Triple Crown — and pose for photos during a long weekend in January. Visitors who “liked” the Diamond Boutique on Facebook and posted a photo of themselves wearing the diamond would be eligible for a drawing in which a diamond bracelet was the first-place prize. The drawing was held a week after the event.

The Diamond Boutique had tried a similar promotion in 2003 with a 12-carat diamond, but having this latest promotion tied into Facebook added to its interactivity and reach. “The difference is you didn’t have the Internet or Facebook back then to really blow something up,” says Natasha Digius-Mahdavi, manager, staff gemologist and daughter of owner Mali Digius. “But we had a great response last time, too, and met people who are still clients today.”

EVERYONE AND THEIR DOG TRIED ON THE DIAMOND • OThe promotion drew 2,000 people to the store over three days. Security staff limited access to the store to 20 people at a time, ensuring there was space for regular customers, wheelchairs and children, too. The wait was about 20 minutes to get into the store, creating enough of a line to attract more attention but not too long of a wait to discourage people. Seven staff members were consistently busy.

A red carpet was set up with a Diamond Boutique backdrop so that visitors could pose like celebrities being photographed by paparazzi. The first 100 visitors to pose for photos received triple-strand freshwater pearl necklaces with a retail value of $135.

All who posed were also given a souvenir photo of themselves and a gift certificate, which they could use beginning in February.

All of the publicity was generated by the media and the store’s hired publicist. The Diamond Boutique didn’t pay for any additional advertising, and no mail was sent out. Unfortunately, their email service malfunctioned and they weren’t able to execute the planned email blast.

COAST-TO-COAST COVERAGE • “We saw a lot of new faces in here from San Diego and throughout southern California,” says Digius-Mahdavi.

“The bonus was getting people in the store and getting our names out in the public without much of an ad budget.”

Publicist Denise Mahaffey of Malama Marketing got the story on the local news, on the LA news, on CNN Headline News; even Nancy Grace talked about it on her show.

The owner of a specialty cat store in the mall brought in a $25,000 Savannah cat (wild, but domesticated) to try it on. Dogs wore it, as did babies and men. “One lady broke into tears when she put it on. It was an amazing, unreal feeling to her to try that on. It made us appreciate what we do. There was a lot of excitement because it is a museum-quality piece and you usually see something like that behind glass. People are rarely given the opportunity to touch it and try it on,” Digius-Mahdavi says.

Make sure security is tight. Review with your employees. Have a system to turn all those visitors into customers. The Diamond Boutique gave out gift certificates, which could be used within three months.

Train your staff to be polite in the face of questions or concerns about conflict diamonds and other issues. “We did get some weird people,” says Digius-Mahdavi.

Bolster yourself with caffeine to prepare for the onslaught.