See the results of our latest Holiday Season Mini-Survey.

The verdict is in: It was a surprisingly merry holiday season for most jewelers, thanks often to a few big-ticket sales.

The upbeat numbers that we’d been seeing since the Black Friday weekend ticked up higher in the last week before Christmas. One in three jewelers, or 33 percent, described the season as better than expected and a further 13 percent labeled it flat-out “terrific”. Thirty-one percent said it was in line with their expectations, while for 23 percent of jewelers it was disappointing or “dismal.” While foot traffic remained down compared to last year, average ticket edged higher in the last week: 48 percent of jewelers said their average transaction value was over $350, while 43 percent said it was up over last year. 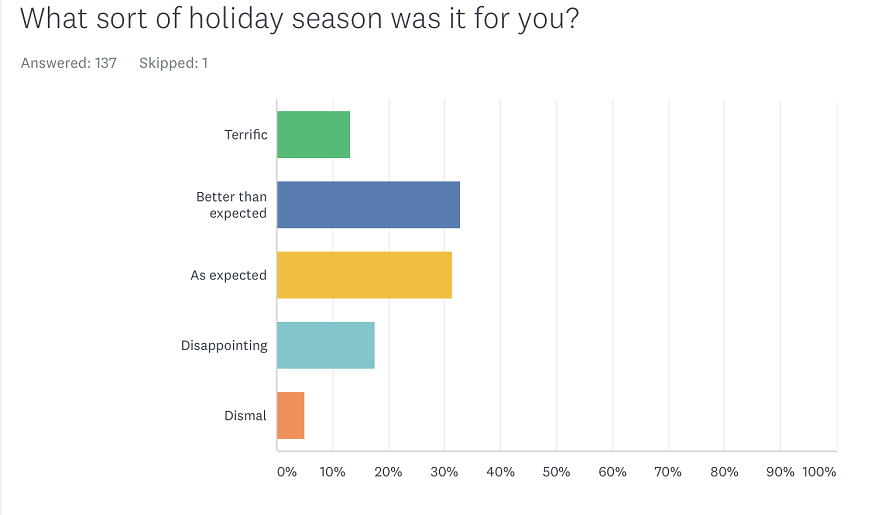 “We moved a couple of very large pieces that allowed us to realize a 22 percent increase over last year’s number. But we’re feeling the Internet bite,” said David Abrams, owner of Grand Jewelers in Rancho Cucamonga, CA, in a comment that was typical of many of our Brain Squad members.

We’ll publish a more detailed report online at instoremag.com as soon as we gather a few more responses. In the meantime, you can see more charts and all the Brain Squad’s comments about the holiday season online.

Related Topics: Brain Squadholiday business
click to Comment(Comment)
Up Next

Jewelry Store to Become ‘Like a Landmark’ with Major Expansion

These Are the Lessons That Jewelers Learned in 2017

Whether you want to go fishing — or enjoy some of the other good things life has to offer — you can take a cue from Jim Adair and choose Wilkerson to run your retirement sale. After 38 years in business, Adair decided it was time to enjoy some free time. His Missoula, Montana store, Adair Jewelers, will stay in business but without him at the helm. It was the perfect opportunity to call in the experts in retirement sales. Adair says he spoke to a lot of people who have done retirement sales to help him make his decision and he chose Wilkerson. “Wilkerson seemed to have the best set up, the best organization, the most current marketing of any of them,” he says. “If you want to run a successful sale, you have too much money on the line to be screwing around with trying to do it yourself.”