The pearls are from TARA & Sons.

The jewelry was sold during the 2017 Berkshire Hathaway shareholders weekend at Borsheims. The pearls, new for this year, were hot sellers, as were diamonds and pens with Buffett’s signature, according to Borsheims. 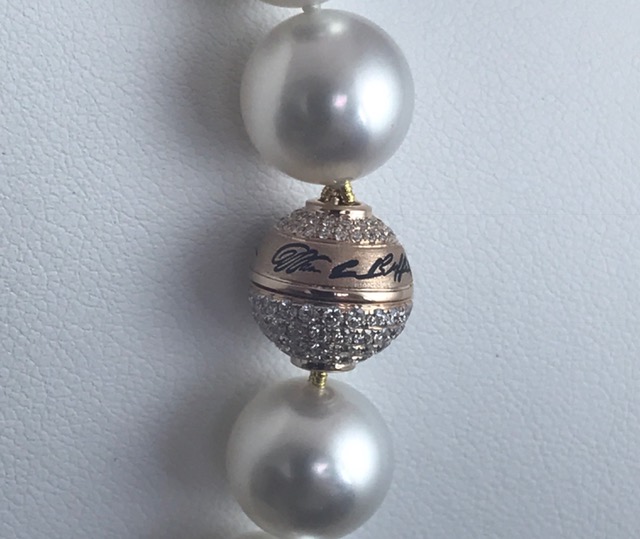 Borsheims’ shareholder pricing continues through May 13.

The signature on the clasp is adorned with diamonds and featured on either white, yellow, or rose gold. Some strands are multicolored and some are white.

The pearls are from TARA & Sons.

According to Borsheims, the Warren Buffett signed diamonds have been “extremely popular” with shareholders since they were introduced in 2014.

The company states: “Borsheims brings in a very limited supply of loose diamonds featuring his signature, and shareholders who purchase them can have them set in a ring, stud earrings, or a pendant necklace. Some shareholders even keep the stones loose and return year after year to purchase additional signed diamonds to add to their collections. Each diamond featuring Mr. Buffett’s signature is part of Borsheims Signature Diamond collection, which is mined and polished in Canada. The signature is engraved inside the diamond, and requires a jeweler’s loupe to view.”

Borsheims Fine Jewelry and Gifts is one of the nation’s largest independent jewelry stores and is part of Berkshire Hathaway.