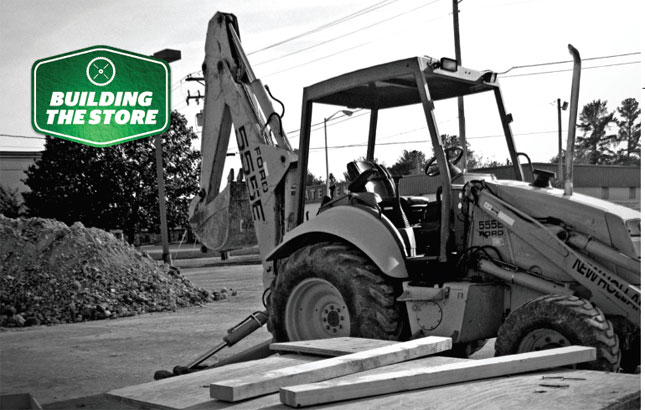 As construction begins at last, owner Jay Klos must consider everything from electrical outlet placement to making the restrooms “scream” with style

Published in the December 2012 issue

PART 4 OF A SERIES that will cover the construction of the new Grogan Jewelers store in Florence, AL, from initial plans to a projected spring 2013 completion.

By early November, work on the project to build a new Grogan Jewelers store intensified.

Owner Jay Klos was pleased to finally have tangible results at his building site. Ground had been broken and the footings were in place for his new store. It was becoming easier to imagine that a structure would stand in this space by spring.

Next up on the construction timeline would be pouring the slab. Measurements would be crucial at this point if the store is to perform as envisioned.

“Here’s the tricky part,” Klos says. “Before you put in the slab, you have to put in your electrical where the cases are going to be and measure everything down to the inch. All of it has to be precise.”

After the slab, the steel frame will be put in place.

Meanwhile, architect and interior designer R. Cherri Pitts of Studio C Architecture & Interiors was putting the finishing touches on plans for the 4,000 square feet of Klos’ complex that will not be part of the jewelry store.

Klos’ plaza is being built in two phases, because he wanted to have a lease signed before building the space for a tenant. One business was close to signing a lease, so Klos was preparing to bid out Phase 2 of the project.

“The lease portion is drastically going to reduce our payment to the bank — by almost half,” Klos said. 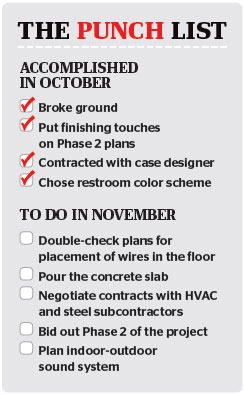 Klos and Pitts were also working to fine-tune the case design and inside finishes, including the flooring, which will be tumbled travertine in the sunken engagement center and rustic hardwood in the main showroom.

Klos contracted with Ron Gay of YCC Limited Jewelry Store Design to design cases using CAD. The cases will be 3 or 4 inches higher than what’s typical. “For a normal person looking into a typical case, the distance from eyes to jewelry is probably 30 inches. With the design we want, it’s more like 18 to 20 inches.”

After the design is complete, Klos will put the project out to bid. His budget is $150,000.

Pitts was also in the process of designing the restrooms.

“There is some really cool stuff going on in the bathrooms,” Klos says. “You need to do that. People always ask to use your bathroom.”

Overall, the restroom palette will be muted, but one wall of both the men’s and ladies room will have an eye-catching metallic paint job — probably electric blue in the men’s and magenta or lime green for the ladies. “That one wall is going to really scream and pop,” Klos says.

Klos is also working on a sound system for inside the store, outside the store and for the entertaining area out back.

“We think it’s important that when you pull up to a store you can hear music outside; it sets the tone.”