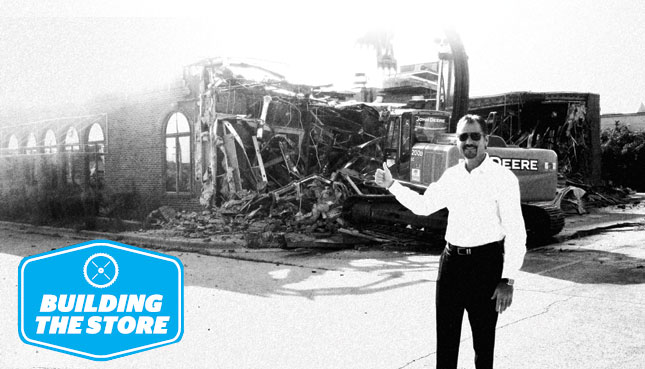 Building the Store: The dog days of August: The Trouble with The Dirt

Published in the October 2012 issue

Over 10 days in the middle of August, when some lucky jeweler was no doubt enjoying a late summer vacation on an idyllic beach, Jay Klos, owner of Grogan Jewelers, was in Florence, AL, watching a building come down.

Demolition of a former restaurant on his recently acquired property — where his spacious new destination store will be — took about 10 days. All went well with the city permits. The appropriate departments showed up to disconnect utilities and remove city equipment. The building was torn down, as expected.

But as the footings from the old building were dug up, an unexpected expense cropped up — in the form of dirt.

Klos was surprised to discover that the dirt under the restaurant was not properly compacted, even though the building had been in that location for 20 years.

In late August, Klos was predicting the steel frame would go up in early October.

“It takes six to seven weeks from the time you throw out a bid for steel until the time they start erecting it. You have to have the steel made to specifications.”

Meanwhile footings, subflooring and the pad will go in.

Klos is building an 8,000-square-foot retail location, of which 5,500 square feet will be the new location of Grogan Jewelers. The rest he will rent to a tenant he deems to be an appropriate fit. Klos closed on the property in July. His budget is $2 million, including the purchase of the land.

In late August, while waiting for that steel order to go through, Klos had a lot to think about. Here are just a few of the things on his to-do list on Aug. 27:

“We’re picking out the basic things now,” he says, including the flooring — wood, for most of the sales floor, and stone for the sunken, engagement shop-within-a-shop area.

Jewelers Sales Have Been Strong, But Now Comes The Holidays