[dropcap cap=L]ooking for a yardstick? You’re in luck. Instore has teamed up with the The Edge Retail Academy to provide readers with monthly benchmarking figures they can use to gauge their store’s performance against that of their peers. In every issue we will present two sets of numbers: The first will track the basics — gross sales, average sale value and GMROI — on a month-to-month basis. The second will highlight a new category we will break down and analyze. The information will allow you to see those areas where you’re ahead of the curve, and those with potential — in other words, those where you’re lagging and likely need to pick it up[/dropcap]

• 61 percent of revenue comes from diamond and colored-stone jewelry and loose diamonds.
• Yet this category is dwarfed when it comes to number of sales, by other lines including gold, silver (the big sales leader by units), watches and repairs.
• While there will never be a proportional correlation between sales and the number of units sold, given the much greater value of diamond pieces,  the two pie charts tell a clear story in red and brown.

The take away: For most stores, it’s diamonds that bring home the bacon. In theory, a 12 percentage point increase in the number of diamond and colored-stone sales would increase total dollar sales by more than 50 percent.

• With 159 stock items sold on average, that is about 6 per day in March … if you have two salespeople that’s only three sales each per day!
• The average store did nearly 21 percent of sales from repairs (i.e. $14,255).
• The GMROI figure was derived from an average markup of 102 percent on a stockturn of 0.6.

Action Area: Let’s say your store is recording an average retail value of $170 per item and you’re ringing up 6,000 sales/repairs a year. If you could lift that by $30 (up to the annual average of $200) it would mean a further $180,000 in yearly sales. The return on effort chart on the left should give you a clue where to target your energy.
Data gathered directly from the POS systems of more than 300 stores by the Edge Retail Academy. 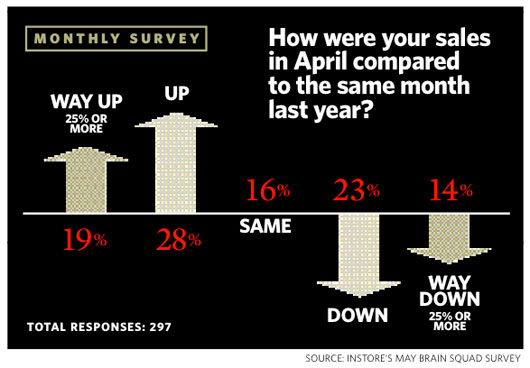 David Brown is president of the Edge Retail Academy, an organization devoted to the ongoing measurement and growth of jewelry store performance and profitability. You can contact him at [email protected]

If you’d like to contribute your own data and receive a personalized KPI report each month, call (877) 910-3343 or e-mail: [email protected].

Advertisement
Related Topics: David Brown
click to Comment(Comment)
Up Next

By The Numbers: Danger of Unproven Lines