WHAT A DIFFERENCE a year makes.

The Centurion Show in Scottsdale, AZ, is considered a favorite by many retailers in the industry. The laid-back atmosphere, delectable lunches, calorie-worthy ice cream stations and end-of-night happy hours (with single-malt scotch!) only add to the beauty. But the best part that so many love about Centurion is that – unlike with Las Vegas – everything is relatively under one roof. The majority of the show’s buyers, exhibitors and press stay on premises, so at the end of the day, after the events/dinners/parties are over, the jewelry community gathers in one gorgeous, comfortable space, which is usually where most of the magic happens. This year, attendees and exhibitors alike seemed especially excited about the jewelry business in 2018, with many reporting strong holiday seasons.

The show is held in the ballrooms with bigger-name brands renting full-sized suites for their appointments. Forevermark had a gorgeous space with an outdoor seating area overlooking the grounds, which made for a pleasant appointment when it came time to see the new Jade Trau pieces for Forevermark. And brands like Michele Watches and Pesavento had plenty of space in their suites to house multiple appointments at once.

With Centurion being the first major American jewelry trade show of the year (Vicenzaoro in Vicenza, Italy, is the first international show), it’s often the place many retailers look for trends, and this year’s show was no exception. The trend most apparent would have to be multicolored and rainbow-inspired gemstone pieces, which we saw in the form of big, bold earrings at Goshwara, fun cluster rings at Effy, stackable bands at My Story and channel-set bracelets at Jane Taylor Jewelry. Another style statement was the use of clear or white center stones in big sizes or cool cuts that were not diamonds (think rock crystal, white sapphire and white topaz). Rose-cut gemstones – either diamond or otherwise – made a big-time comeback in the form of engagement rings by up-and-coming designer Shelly Purdy as well as in chunky cuff bracelets by Anzie. And leather combined with precious metals and gemstones was a hot look from brands like Luca Lorenzini for Henderson Collection and pearl jewelry icon Mizuki.

The show was attended by buyers from some of the most recognizable names in the independently owned jewelry retail arena (Tiny Jewel Box of Washington, DC, Lee Michaels of Baton Rouge, LA, London Jewelers of Manhasset, NY, and Ben Bridge Jewelers of Seattle, WA, just to name a few), but also by big box retailers such as Neiman Marcus, and overall, the attitudes toward the industry and where it’s headed seemed to be on the positive side.

As usual, Centurion also hosted education sessions and breakfast discussions starting on the Saturday night before the official opening of the show on Sunday and continuing throughout until the last day. Tuesday’s close of show ended on a high note – literally – with a dinner and private concert by recording artist Gavin DeGraw.

Centurion and those involved with it still do the trade show thing right. They have just the right mix of reputable retailers, popular brands, solid education, great meals and fine entertainment, and they found a beautifully serene place to make it all happen and continue to happen, year after year.

Colored gemstone and diamond stack rings by My Story Jewelry

Leather and diamond bracelet by Luca Lorenzini for Henderson Collection 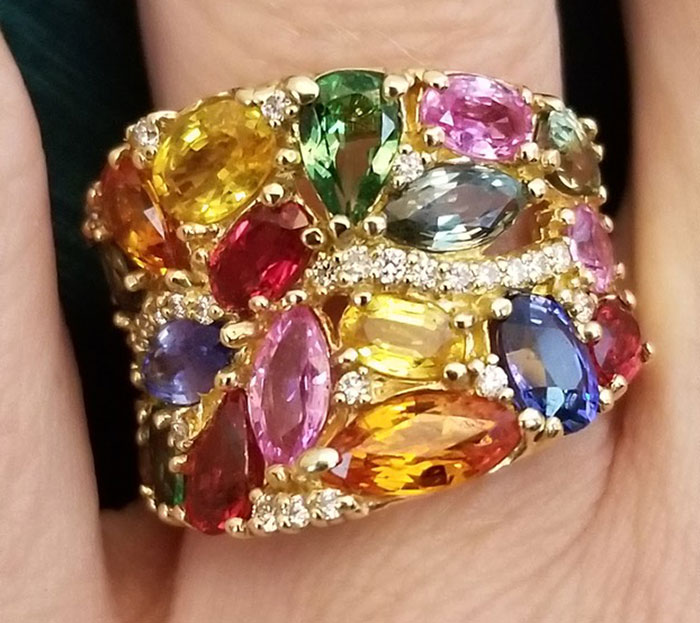 910-Carat Diamond Discovered in Lesotho Is the 5th-Largest Ever

Our Brain Squad Rates the Best-Selling Brands of October