A metal security gate is now tucked away during the day inside a wall built for that purpose.

ON A BUSY DAY THE week before Christmas, Howard’s Jewelry Center in an eastern suburb of Cleveland, is abuzz with activity. Customers come in waves all day, tracking down giant hoop earrings, a charm for a young granddaughter, or a seasonal splurge for themselves.

Owner Howard Hurwitz hurries in for an appointment, stopping to exchange pleasantries with a customer he’s known for years, who congratulates him on the success of his business.

It’s a typical pre-Christmas week in many ways. Something’s different this year, though. Howard and Leslie Hurwitz have seen their store in a new light this season. So have their customers.

The couple won a $100,000 store makeover in a Jewelers for Children charitable giving contest, for which they raised $50,000. The renovation — the first significant change to the store in 30 years — was complete in December. “Customers are all pleasantly surprised,” Howard says. “We are very pleased and happy for everything that everyone did for us.”

One of the biggest changes is how drastically brighter everything is with fresh paint, new in-case displays and LED lighting.

Howard and Leslie own four stores in the Cleveland metropolitan area, and had been passionate supporters of Jewelers for Children ever since their first Facets of Hope dinner in Las Vegas touched their hearts 20 years ago.

There, they heard children talk about their struggles with catastrophic diseases and how they were helped by St. Jude’s Research Hospital, one of the charities JFC supports. “I’d like to get more people involved in it,” says

Howard, now a board member. “And I think if they could get to one of these dinners and hear the kids’ stories, they’d be a donor for life.”

JFC is woven into the fabric of their business. In all, they’ve raised $200,000 for the organization with collection canisters on their counters. The couple promotes JFC in their advertising and suggests their customers make a donation for watch batteries and other small repairs they offer for free.

For the redo, the Hurwitzes chose their Maple Heights flagship location, a busy place in a high-traffic area that sells jewelry and also makes loans on jewelry. Although they’ve occupied the space for 30 years, there have been few changes in that time.

The design team carefully considered which updates would bring the biggest bang for the buck.

Eric Zuckerman of sponsor Pac Team America says the goal was to make the buying experience comfortable, special and intimate. “You can take an old store that hasn’t been touched for 30 years and do some things to make it very fresh and inviting. Environment creates confidence. If the environment is not at the same level of the product and the training of the salesperson, that inconsistency will be felt. Simple and clean and presentable doesn’t have to be a major renovation.”

Zuckerman and Ruth Mellergaard of GRID/3 International agree that the improvements with the biggest impact were replacing the ceiling tiles and upgrading the overhead track lighting to LED bulbs.

“The ceiling tiles were in pretty bad shape and set the tone for the entire environment,” Zuckerman says. “Something as simple as their replacement alone made a big improvement. Same thing with adding case lighting and replacing their bridal in-case presentation. What was there was very dark and worn, which contributed to the entire store appearing worn out. New case pads and displays gave a fresh look that was visually impactful.”

A metal security gate near the threshold was an inhospitable eyesore by day, but a necessity by night. Now, thanks to a design by GRID/3 International, the gate is enclosed in new drywall partitions with flush detailed doors that completely conceal it when the store is open for business.

“When you walk into a retail environment, being greeted by what is essentially a metal fence is not ideal for establishing a warm shopping experience,” Zuckerman says. “Having them hidden while the store is open allowed them to serve their purpose without detracting from the store’s presentation.”

Ruth Mellergaard of GRID/3, who donated her time to the project, says the question she asked before beginning to outline an overall plan was, “How does the business work and how can we make it easier for them to deal with their customers, to make their customers feel wonderful?”

Heavy wooden chairs were replaced by modern chairs with a lighter profile to bring the diamond engagement area into the 21st century, and designated spots for a children’s corner and a custom refreshment station for coffee are designed to put customers at ease.

The interior and exterior have been freshly painted.

Many of the showcases were in good shape, but some didn’t match, so their fronts as well as the front of the service counter were updated with panels covered with 3M Di-Noc film, which changed their appearance completely. 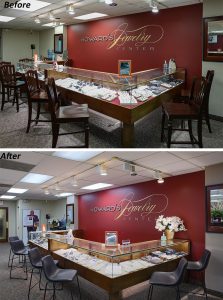 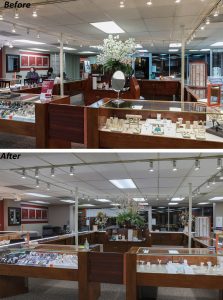 Related Topics: FeaturedHoward’s Jewelry Centerjewelry stores in Ohio
click to Comment(Comment)
Up Next

This Store’s Murder Mystery Killed at the Party