The name Geeklery first emerged when Hollier was a college student, and a friend in her Dungeons & Dragons group made earrings out of the dice used in the game. “I said, ‘Oh, you made geeklery!’ and that’s how the name came about.

“I’m kind of geeky about everything,” she says. “I’m a huge Disney fan, I love going to the parks.” She still plays Dungeons & Dragons, the fantasy tabletop role-playing game, every Sunday with her husband, son and some friends, socially distanced for pandemic times. She also frequents the Denver comic-con and is a fan of the cult classic Stormlight Archive, a series of epic fantasy novels by best-selling author Brandon
Sanderson.

Geeklery kicked off with an art show that celebrates favorite stories and characters and then continued with its own website, geeklery.com, featuring the handmade work of artists, most of whom are jewelers. Hollier, who had thought about doing something like that for years, has long owned web domains for both “geeklery” and “nerdlery.”

The COVID-19 pandemic is one of the reasons she decided to make “geeklery” its own standalone company in 2020. Much of what’s available on the website can be drop-shipped and sent directly to the customer, so if Balefire Goods needed to close temporarily, Geeklery artists can continue to send out the merchandise.

Hollier was initially inspired to create this niche by a pendant she made for her husband that contains some of the more famous quotes from Stormlight Archive. “That piece has been one of the most popular sellers so far. It’s just a simple bar drop pendant with some of the quotes from the book in it.

“We have a bunch of customers coming in who really want something that ties into their own passions and loves, and for a lot of them, that is this kind of fan art, pop culture kind of stuff.”

Since the launch, many people have reached out to Hollier to tell her what fandom theme they’d like to see next, from sci-fi to literature.

“A lot of what there is out there is mass produced, and we believe there is an audience that wants unique, one-of-a-kind pieces inspired by fandoms,” Hollier says.

All work is handcrafted, one-of-a-kind and limited edition. Balefire Goods’ brand ethos of jewelry-making in an ethical and sustainable fashion crosses over into Geeklery.

“As a lifelong nerd and geek, it’s always been an interest of mine to include fine jewelry and art with the works that are inspired by the characters and stories that we all connect to,” she says. “I believe that our shared love for these fandoms can be a bridge and build relationships that can be life-changing connections.”

Hollier has found that sharing her own passions has helped her connect with clients, new and old.

“A lot of people reached out and said, ‘I didn’t know you were a Sanderson fan. Let’s talk about it!’ We’ve had all sorts of people saying, ‘I’m a secret nerd, but I would wear this.’”

Pop Culture Classroom will receive a portion of the proceeds from Geeklery’s ongoing sales. The Denver-based non-profit organization is working to inspire a love of learning, increase literacy, celebrate diversity and build community through the tools of popular culture and the power of self-expression. 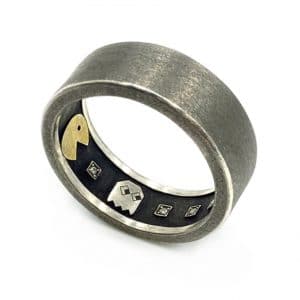 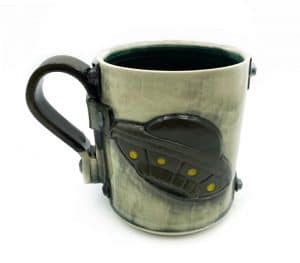 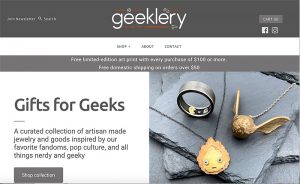 Advertisement
Related Topics: jewelry stores in Colorado
click to Comment(Comment)
Up Next

Retail Jeweler’s New Collection Draws on the Law of Attraction

Why We Shouldn’t Take “Normal” For Granted