Clean, Classic, Contemporary: Heartwear Designs settles into a space worthy of its slogan 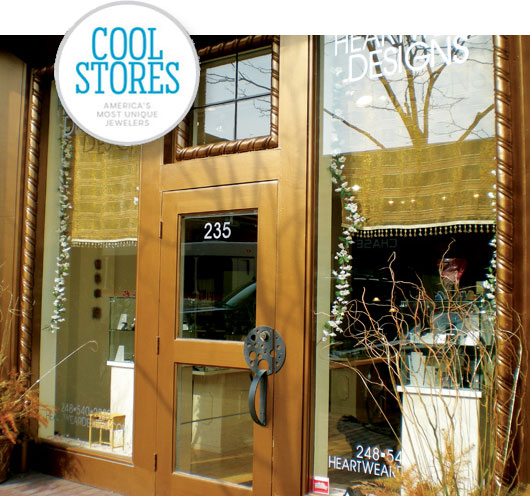 For more than 20 years, Marcy Feldman designed distinctive, geometric jewelry in her basement, selling it wholesale and then on the juried art-fair circuit. But after 10 years on the road, beset by thieves and even tornadoes, Marcy and her business partner-husband, Michael, decided they had enough excitement and needed to settle down.

Their retail store, Heartwear Designs, was born in 2004 in tony downtown Birmingham, MI. But it, too, was tucked away in a basement. Just last year, they moved again, resurfacing in a highly visible, street-level location that the couple designed to complement Marcy’s clean-lined jewelry. Finally above ground, they filled the space with light — natural and overhead — and love to watch life go by outside their large picture windows. — Eileen McClelland

BIRTH OF A BUSINESS

After 13 months, she began working for herself in her basement. Her husband, Michael, a lawyer, joined her in the business 27 years ago. “He decided he didn’t want to do law and the only other thing he knew was my business, because he was doing the books for it,” she says. “He got us into the jewelry shows as soon as he got into it.”

Heartwear Designs was a member of the Contemporary Design Group, formed to spotlight the work of young designers at big jewelry shows. Her jewelry was carried by Saks Fifth Avenue, Bloomingdale’s and Fortunoff.

LIFE ON THE ROAD

[inset side=left]FUN FACT: Heartwear Designs’ Web address is printed on the bottom of the front window so that window shoppers are able to contact the Feldmans even if the store is closed.[/inset]

Some retail buyers, though, told Marcy her designs were too unusual for them. “They said they could never sell anything that contemporary,” she recalls.

So for 10 years, Marcy and Michael also took the show on the road, exhibiting in juried art fairs in Florida and the Midwest, occasionally accompanied by their three children. “We could sell anything on the streets at art fairs,” Marcy says. “We did really well, but it was physically draining to do art fairs, to set up sometimes at 5 in the morning and stay till 9:30 at night. At one fair our whole tent blew away from a tornado; at another we were robbed by Colombians.

We were breaking down in Chicago and our whole duffel bag was just swiped. We thought it would be safer to have a store. We wouldn’t be blown away and we could have a security system.”

Their first store in downtown Birmingham was in the lower level of an office building and lacked the visibility they needed. So in November 2007, the Feldmans decided to move a block and a half to a more pedestrian-friendly storefront. The move wasn’t without challenges.

“One safe weighs more than 4,000 pounds. We had to hire a crane and they had to lift it over four stories of trees to get to the new location,” Marcy says.

The Feldmans have done much better with walk-in traffic and sales since the move, Marcy says, on a street just two blocks from Birmingham’s premier, celebrity-attracting hotel, the Townsend, and four doors from a popular, historical movie theater. “It’s a really nice upscale area to have a store in,” Marcy says, “and it’s very friendly.”

So desirable is the area that downtown Birmingham has attracted 10 jewelers in a three-block area, but somehow, they all seem to complement, rather than detract, from one another. They join forces for fund-raisers and refer customers. “Everybody does something different,” Marcy says. “We cooperate more than compete.”

In addition to Marcy’s designs, which make up about 95 percent of the  inventory, the store carries other carefully chosen designers, including glass artists, whose work adds splashes of color to the store’s decor. Marcy searches for designers that appeal to her at the Ann Arbor Art Fair in mid-July. “I run around and try to find the best,” she says. They are currently showing the work of Barbara Silverstein and Kathy Frey.

The new space, though a find, was also a fixer-upper. The interior consisted of two rooms divided by a furnace and a bathroom, which were relocated by the contractor the Feldmans hired to break down the wall. The wood floors of the 80-year-old building had been painted pink, green and yellow to suit the store’s former life as a kitschy, shabby-chic gift store

“There were layers and layers of paint,” Marcy says, that had to be stripped before the floors could be restored and refinished. “When we were working on the floors, the finish we put on them smelled so bad, the fire department came. People upstairs had called about the bad smell.”

Recycling as well as restoration were important in their endeavor. At a jewelry store’s bankruptcy auction, Marcy acquired specialty cases with travertine marble pedestal bases. The tops were rickety, so she had new surfaces made.

They were also able to salvage pieces left behind from the former business, including a true prize — a framed 8-by-8 foot mirror. They painted its frame bronze and hung it on a wall, which makes the space look twice as large. “Now the building is very clean looking with light oak floors and beige marble,” Marcy says. “We made the back wall and the exterior a rich, metallic bronze. It’s very unusual, expensive paint and it has a metallic feel to it. People love the color. We have matching packaging with bronze bags, tissue paper and boxes.”

“Because I have always said I could imagine my jewelry magnified into life-size sculptures, we have large replicas of two links from my signature Geometrix bracelet that we used as the door handle,” Marcy says. Two more links are incorporated in the handrail inside the store.

Brocade chairs and a bright rug from Nepal soften the scene and add a touch of sophistication. Built-in glass-encased niches showcase large necklaces on either side of the window. Interior designer Leslie Ann Pilling chose the paint color, the location of lights and wall cases.

The Feldmans visited as many jewelry stores as they could for inspiration. As a result, they decided to install a combination of metal halide and halogen lighting. They also learned what they did not want. “With the beige walls and bright lights it’s different from the usual blue-gray jewelry store with formica or wood counters,” Marcy says.

“ I wanted it to look more like a gallery than a store. And each case is individual. We don’t have a U-shaped thing that salespeople have to stand behind. It’s a more friendly atmosphere.”

1Where did the name Heartwear Designs come from? When I was working out of the house it was just Marcy Feldman Designer Goldsmith. But back in 1981, any company that had its last name as part of the business — and we would see them at jewelry shows — sounded like two old men. I wanted something very young. The idea was that you give jewelry from your heart to someone, and they wear it.

2What’s it like to work so closely with your husband? We manage. We’ve been married 38 years this month, and we’ve worked together 27 years, so it’s kind of a natural thing. I design and he does the business side and we both sell and we try not to step on each other’s toes.

3What did you learn from art fairs? Doing art fairs in different regions of the country makes you aware of what different people think is appropriate to wear. A certain pendant we sell in Cleveland, OH, for 16-year-olds is considered appropriate in Florida for 3-year-olds.

4What is your dog’s role in the business? Scruffy, a cockapoo, comes to work and wears a faux pearl necklace. Some people will come in just because of her. One lady from Australia came in constantly, but she only wanted to see the dog; she never looked at the jewelry. I send out cards, a picture of the store with Scruffy in the window that says, “Scruffy misses you.”

5Do you really serve oatmeal? We don’t have a coffee maker, so we make tea or hot cider, and, as a joke, if it’s snowing outside, I say, “Would you like some oatmeal?” I think we’ve had only one person take us up on it. But we want the store to have a very homey atmosphere. We incorporate anything that appeals to the senses. We play romantic music and serve chocolates and Perrier.

This story is from the December 2008 edition of INSTORE

How to Drum Up Father’s Day Business, Advice on Employee Dress Codes, and More of Your Questions Answered

If Your Marketing Seems Scattershot, Here’s How to Streamline Your Messaging