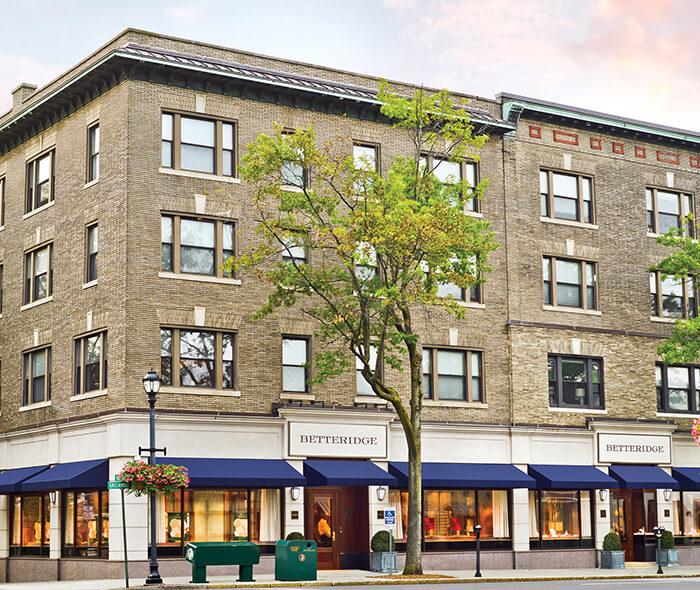 LIKE OLD FRIENDS AT A house party who all seem to squeeze into the host’s cozy kitchen, guests at Betteridge in Greenwich, CT, gravitate toward the paneled club room, whether or not there’s an open bar stool.

Who wouldn’t? It’s got an inviting booth, a cool watch display under the sleekly elegant bar top, and even a convivial happy hour for regulars.
Including such a beautiful bar room in the new flagship home for Betteridge is a home run for event marketing, says chief operating officer Win Betteridge.

The bar is relatively small considering how large the store is, so even if only 30 people are attending an event, it looks and feels like it’s the place to be.

Groups are invited to use the space for fundraisers and event-based marketing, ensuring new people are visiting the store regularly.

“It can be very intimidating for a lot of people, even wealthy people, to walk into a jewelry store like this, but if you can bring them in and make them feel comfortable the first time, then you have the opportunity to make a relationship that is a lasting one,” Betteridge says.

etteridge says. The new flagship Betteridge location, though expansive in square feet, case space and creative possibilities, is full of intimate enclaves and retreats that give the store a comfortable, residential vibe.

The company was founded in 1897 in New York City by Terry Betteridge’s grandfather and great-grandfather. Today, Terry is the CEO of the company, son Win is COO, and his daughter, Brooke, is inventory manager and jewelry buyer. Win’s wife, Natalie, is social media and events manager.

The business has expanded into its customers’ favorite vacation spots by opening stores in Palm Beach, Aspen and Vail. (The Vail location was named a Cool Store in the 2011 contest. Read about it here instr.us/11161.) It is also increasingly working with international customers.

Betteridge had been a destination for those in the know in Greenwich for 60 years.

Greenwich for 60 years. But the Betteridge family felt stymied in the original location by a lack of space for merchandise. They could display only half of their Rolex inventory, for example. Limited space also meant limited creativity when it came to adding popular new designer lines, let alone throwing a party.

And because of the way the old store was designed — with limited display space facing the street — casual passersby were not enticed to cross the store’s threshold.

The atmosphere itself, though — cozy, elegant, clubby — was working for them. So the decision to move to a spacious spot down the street was not without a measure of anxiety for the family, Win says.

“You don’t want to feel that you might lose the magic, particularly when we are a long-time family jeweler here,” Betteridge says. “A lot of people really loved the space and a lot of our customers were nervous that it would change the feeling of the place and the way it was managed.”

But Veronica LemieuxBlanchard, Win’s stepsister and lead designer on the project from Gachot Studios, put all family fears to rest by crafting a similar feel over a much larger space.

“You’re meant to walk in and feel comfortable, but you don’t realize all of the elements that go into that feeling — the recessed lighting, the paneling on the walls,” Win says. “It’s almost like you are walking into someone’s living room.”

The design inspiration was taken from the original store, along with private residential design and turn-of-the-century European natural history museums, an environment that fits well with Terry’s penchant for collecting art and artifacts, and exotic treasures like a framed kimono.

The new store also has a lot of showcase space facing the store’s exterior, which brings in more foot traffic than they had seen in the past. Designers softened the streetscape with planters and awnings. The interior window displays are in keeping with the original store’s language of wood, velvet and gold leaf, softened by a frame of curtains.

The designers describe the custom brass doorknob at the main entrance as an amuse bouche, a French term that refers to a small, complimentary appetizer offered at restaurants. It’s an enticement to come on in.

The foyer is entirely residential, causing visitors to pause before transitioning to shopping. Full-height panels, fabric sconces, an umbrella stand and upholstered bench are inviting elements, suggesting that Betteridge is about family and community, and not only about selling jewelry.

In the main sales area, freestanding vitrines lighten up the classic look, while the wood and leather-clad central island, which anchors the space, is inspired by Dutch and French museum displays. Walls are upholstered in beige linen to create a backdrop for the Betteridge art collection.

Win says the store designers also did a great job of separating vendors who wanted to have a distinctive brand presence without diluting the store’s design cohesion. “We try to allow them to have their own areas but to do it in a way where they are clearly distinguished and best represent the Betteridge brand. Especially with Cartier and Rolex, that can be a real challenge because they have powerful brand colors and imagery that they want to project.” 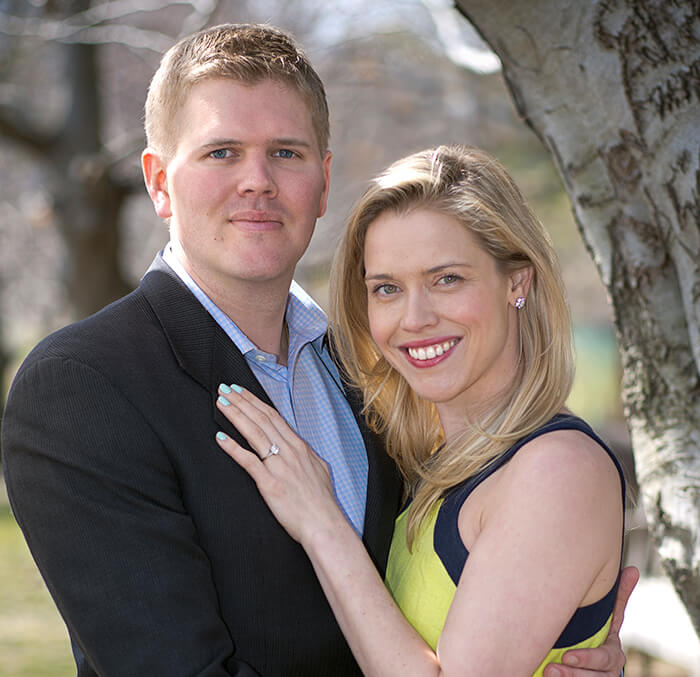 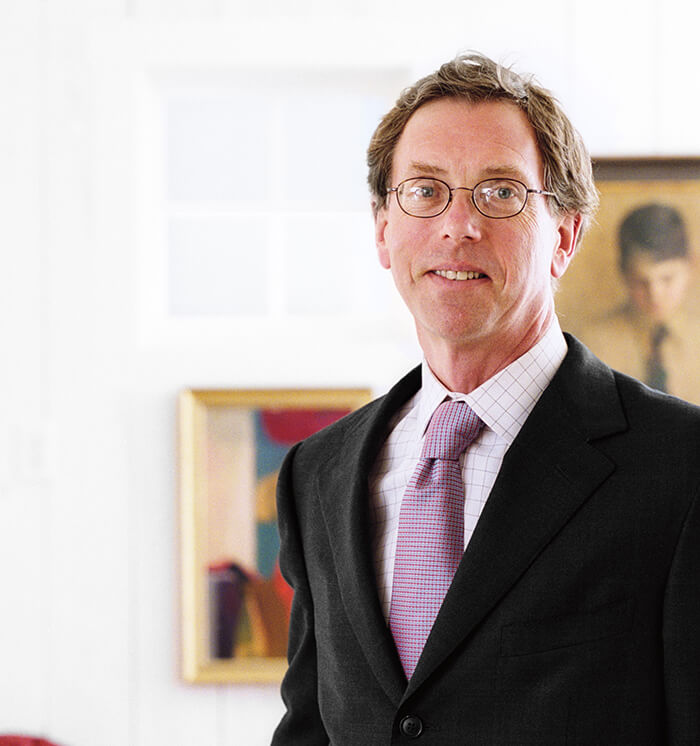 1. Concierge watch repair service. Meet the watchmaker who is going to work on your watch. “He takes the customer through the testing process and shows him how it is performing,” Win Betteridge says.

2. A storyteller. Terry Betteridge has become known for radio ads. “He is a storyteller by nature and comes through in a very genuine way,” son Win says. “He goes in totally unscripted. They will record him for an hour and chop it up into 12 different ads.”

3. Brand ambassadors. Betteridge has expanded into other regions of the country, but finding ways to bring the company culture to new locations is a challenge. So they bring employees of those stores to the Greenwich flagship store every year for a week or two.

4. Service on the spot. Betteridge has 10 jewelers and five watchmakers on site. “We try to do every thing on premises,” Win says. “Dad has always believed that it’s worth it.”

5. Mixing up the price points. Buyer Brooke Betteridge has built a selection of designer jewelry that will appeal to millennials, especially first-time buyers on a budget. The new store allows more of that jewelry in the $500 to $2,000 range to be displayed. “We used to have to bring out designer jewelry on a tray, if somebody asked for it,” Win says. Now a combination of tall cases and museumstyle drawers along both walls of the designer jewelry room accommodate a good selection.

Try This: Introduce the Jeweler

“Our jewelers are very personable,” Win Betteridge says. “And custom- ers want to know who is building their engagement ring, more or less, from scratch. That’s not something you see a lot of jewelers do.”

Small But Stylish Connecticut Store Has Big Plans for the Future

Here’s What Sold Best for The Brain Squad in October