Store has grown from bedroom ‘shop’ to community institution.

AS A TEENAGER, KEVIN Seele was walking through the mall, looking for a job, when a chance encounter with a jeweler named Harold changed his life.

“I thought he was 100 years old at the time, but he was probably around 65,” Seele recalls. “He took me in the back and showed me what was going on in the shop. A guy was sitting at the bench with a loupe and tweezers and a torch, and I thought it was really cool.”

Seele was intrigued. But his interest wasn’t enough to land a job. Harold said, ‘How can I hire you if you don’t know anything?’ So, I said, ‘How do I learn to do that?’”

Harold told Seele about the Gemological Institute of America.

“The very next thing, I was in GIA, I was 16 years old and I was taking a diamond-setting course in New York City. Everyone had some experience and I had none. But I was really good at it; I hit the ground running.”

Seele liked the intricacy of the work, and launched his career as a bench jeweler and diamond setter in his bedroom, which he turned into a shop. He picked up jewelry from retailers, repaired and returned it. “One of my customers was retiring and said, ‘I think you should buy my store —because why would you want to work in your bedroom?’ He convinced me,” Seele recalls. “I bought his store for $3,000 — it was a tiny little closet with three showcases.”

He considered it simply an upgrade from his bedroom — until another client offered him $10,000 of inventory on memo, and he suddenly became a retailer. Kevin’s Gold Post was launched more than 30 years ago. In 1990, it became Kevin’s Fine Jewelry.

It turned out sales came as naturally to Seele as gem setting.

“I was passionate about the product and I found out I’ve got the gift of salesmanship in me,” he says. “I don’t know why. I don’t know how.”

When it came time to build his current store, Seele, an established retailer now, began with a blank slate — new construction in a strip mall with only an electrical panel. It did have high ceilings, though, which helped him envision a grand store with a Tuscan theme that was also warm and welcoming.

He wanted a store that said, “It’s OK if you are here to buy a $28 Alex and Ani bracelet, and it’s also OK if you’re looking for a $50,000 Forevermark ring. We have them both and will treat you the same way regardless.”

Why Tuscan? For one thing, the store is in a community in which 75 percent of the population is at least part Italian. When Ruth Mellergard, a principal of Grid/3 International, came to the project, the design team researched a photograph of the Ponte Vecchio, the bridge in Florence renowned for its jewelry shops. Seele himself found an artist who painted a mural of the bridge for a feature wall, and clouds on the ceiling over the center island. The artist also created a wall finish that looks like Venetian plaster at a fraction of the cost.

Around the center island, Mellergaard’s plans specified wood columns that finished off the store and set off the whole focal point under the sky-themed ceiling. “It created a separate area from all the open, walk-around areas,” she says.

Other distinctive features are wood floors and a mezzanine that holds an office and storage area.

“They pulled off a miracle and made me a beautiful store that I’m proud of,” Seele says. “I had input as well and made small modifications to the plan.”

The store is designed for side-by-side selling. “It’s very open and it encourages you to wander through the store,” Seele says. “You can’t just take a few minutes and walk in and walk out.”

Mellergaard says Seele is a very visual person and appreciated his input. “That makes a designer’s life easier — if they have a sense of who they are and what they want and how they are creating a brand,” she says. “Rarely do people want an interior that is as theatrical as Kevin’s is.”

Seele also consulted with Regina Kay on the design concept. Both Mellergaard and Seele credit general contractor Robert Dykman of RAD Construction for the ease of the project, which took just four months. “He pulled it together so professionally and so quickly that it made my life very easy,” Seele says.

1. After hours sales success. When the store was designed, Seele wanted to show off merchandise in his front window after hours, but due to insurance restrictions he couldn’t have jewelry within 18 inches of the window. The design team created cases that can slide back and forth. During the day they are close to the window, and in the evening they slide back about 2 feet, but are still visible. As a result, Seele has been able to make a number of sales from evening window shoppers, who frequent a martini bar and a restaurant on either side of the store.

2. Difficult customers welcome. While 95 percent of customer transactions are pleasant, due to the high volume of business Seele does, the other 5 percent are less so, which can add up to a lot of aggravation. So Seele hires people who can “take it on the chin and keep smiling. We have people who are literally impossible. God creates them and they beat a path to Kevin’s. They know we’re going to kiss their ass.”

3. The saltwater aquarium. Golden dogface puffer fish Schwartz, well known for years by customers as the “mayor of the tank,” died last year. But it seems Muffin, a puffer fish with an abundance of personality, has been elected to be Schwartz’s successor. “[The fishtank] is our signature look, and kids will be distracted by the fish tank, so Mom and Dad can shop.”

4. The message. Seele responds to online reviews, whether positive or negative, immediately. Yelp reviews pop up on his phone as soon as they are posted. “People tell me they notice that and they like that I respond online. There are not a lot of negative reviews, but having a couple keeps it real. I always stay positive; I never get defensive.”

5. Out-classing the competition. Seele looks for merchandise that is a cut above the competition — high quality brands that offer quality and good value. “I want to offer Fifth Avenue quality and experience at a price that is affordable for the average person,” he says. “So we don’t have imperfect goods or closeouts in our store. Everybody around us is selling the same promotional quality goods — the mall stores, the jewelry exchanges. We’re in a class of our own.”

TRY THIS: Create a Loyalty Program

“We earn our margins and don’t want to be known as a discounter, so our customers are learning about ‘Forever Starts at Kevin’s,’” says Kevin Seele, explaining his loyalty program, which gives back a percentage in store credit for future purchases. “A husband buys his wife a beautiful necklace, and now he has Kevin’s credit to buy her the matching earrings for their anniversary. It’s a total win-win for everyone!” he says. 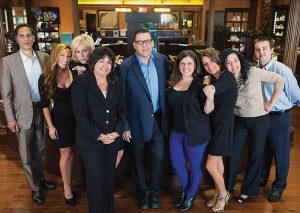 What Jewelers Can Learn from Massage Therapists