This California store does things its own way. And the store’s independence has worked well for its award-winning designer. 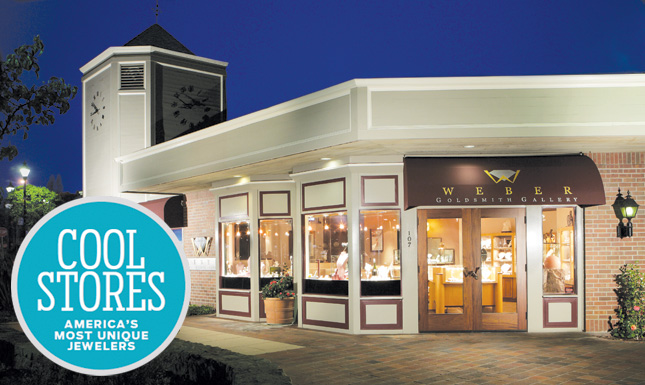 Brad Weber does things his own way — and why not? It’s worked out awfully well so far. Ten years ago, when he was invited to pack up shop and reopen in tony Pebble Beach, CA, his store on Maui, HI, was already doing business at a level many of his peers would envy, catering to clientele that included not a few A-list celebrities. “I’d rather make less money and have better quality of life,” Weber says. Of course, his business on the mainland, with an ever-increasing focus on custom work, thrived too. Last year, he got even more room to move, relocating about 15 miles to Carmel, and a space teeming with elegantly amiable personal touches. — JOSH WIMMER 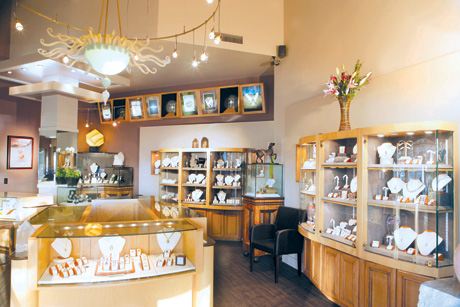 1The repeat winner of prestigious design prizes like the AGTA’s Spectrum Award, Weber says he’s always had a natural affinity for craft, and that extended to the look and layout of the new store. He served as general contractor during the revamp of the space (a former bakery and a onetime Verizon outlet, now combined), aided by architect John Matthams. “I really liked his work, so he helped me with the design, and it kind of fell into place,” Weber says. “I love nice wood, so we got koa and maple — accents that really display.” Funky notes like zigzag shelving, tech lighting hanging from the 30-foot ceiling and a chandelier resembling an octopus’s tentacles make for a vibe that’s singularly Weber’s, signaling “high-end and arty” but “relaxed and customer-friendly” all at once. “In my last two locations, it was such a high-end visitor thing that we didn’t do trunk shows or little spontaneous things,” he says. “Here, we’re doing more of it.”

2“If I were to pick something we’re best at, it’s matching a pie

ce to a customer,” Weber says, “making something that really does fit them. We have very few pieces rejected. A lot of times a jeweler is good on the bench, but can’t really figure out a design for the customer other than looking at (a catalog).” He’s quick to note that he’s not trying to denigrate anyone else’s work, but store manager Christine Kerrington confirms that her boss has a special touch. “If I could clone him, we’d be millionaires,” she says. “He’s spatially gifted. He can see how things are going to work when they’re not there — he can see the piece before it’s created; he doesn’t do drawings, just goes right into the wax.” When Weber is working on a design with a customer, Kerrington says, he often just listens briefly and draws a quick sketch. “And I would say 99 percent of the time, they say, ‘That’s it!’”

Yes-man all the way

3In accordance with that intensely one-on-one sensibility (the bulk of the store’s business is custom jobs), the philosophy at the Goldsmith Gallery is always to say “yes.” “Brad is a complete glass-half-full kind of guy,” Kerrington says. “There’s always a way to make it work, even if it means pulling in other stores. For example, we don’t have fine watches, but a jeweler down the way does. And maybe a husband wants a Rolex. I’m really happy to walk him down to the other store and introduce him to them.” The notion is exemplified by a case from Weber’s Maui shop. “A guy in Canada was going to propose the next day,” says Kerrington, who didn’t work there then, “and his ring was at the store, and there was no FedEx overnight service from Hawaii. So the manager jumped on a plane and flew it to him.”

4Probably the coolest artifact in a store full of them is the fountain that has sat at or near the front of all three of Weber’s locations. It’s topped with an 82-pound globe of rose quartz. “It’s over a foot in diameter and spins,” he says. When the $5,000 or $6,000 feature first arrived at his Maui store, he says, “My dad gave me a hard time about how much it cost. I said, ‘Just trust me. This’ll be cool.’ The very next day, this guy came in and said he’d just been going to get a newspaper at the next store, but he had to stop and look at the fountain.” Minutes later, that passerby made a big enough purchase to more than pay for the fountain, and then some. “I figure it was worth 20 grand a month in Maui,” Weber says. “People come in just to look at the ball.”

5Weber exudes the low-key, ultra-pleasant attitude one might associate with Hawaii and California, and it extends to how his store runs, too. “We don’t do commissions,” he says. “There’s a total commission, and then it’s split evenly. And I pay really well hourly” to ensure there are no hard feelings or sense of financial insecurity. “I want my staff to feel like if the phone rings and it’s one of Joe’s customers, then it’s one of Christine’s customers too — so everybody’s working toward a common goal, and also so that the commission isn’t the driving force behind selling to a stranger.” He feels similarly about his benchwork, where he frequently turns to his other goldsmith, Joe Livorsi, for help. “It’s like doctors,” Weber says. “You can’t be good at everything, so if there’s somebody who does micro-pavé better than I do, I let them do it.” 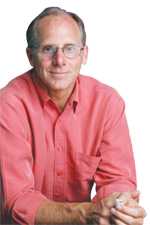 YOU DIDN’T PLAN ON BEING A JEWELER?

Back in college, I had no idea. But looking backwards, it makes sense. I come from a very mechanical family, and I was the kid in high school bending the forks and spoons to make jewelry.

HOW’D YOU GET STARTED?The dean of my department at Chico State referred me to a local jeweler. So I learned from him. I ended up with a teaching credential, but I realized I was a much better jeweler than teacher.

AND YOU WON YOUR FIRST BIG AWARD PRETTY EARLY.

After school, I got offered a job in Maui, and I started doing custom work for them. A year later, the AGTA held the first Spectrum Awards, and a year after that, I won one. I saw my first boss at Tucson, and he said, “What are you doing here?” and I said, “I’m here to pick up my Spectrum Award,” and his jaw just hit the floor. That first award really made me feel that I was worthy and good at what I did.

HOW DO YOU BALANCE DESIGN WORK WITH OWNERSHIP DUTIES?

I have a fantastic manager who takes a lot of the hassles from me out front. I still sit at the bench, and I have a studio at home, and we do a lot with CAD, so that helps with certain designs, although I still like carving.

YOUR “NEPTUNE’S BIRTH” RING IS KIND OF FAMOUS.

Somebody yesterday told me they went to another jewelry store, and they had to go to the restroom, which was really, really nice, and the poster of that piece was hanging in there. Yeah! I made it to the bathroom! Cool!

WEBER GOLDSMITH GALLERY sports large show windows, some of which feature a treatment that shows passersby advertisements but gives everyone inside the store a clear look outdoors — kind of like a one-way mirror. “From the outside, they’re looking at, like, Heidi Klum and her jewelry or one of my pieces,” Weber says. “But from the inside, looking out, you can see right out. It works out perfectly, because it gives us natural light in our office, but when people look in, they just see these images.”

This story is from the September 2009 edition of INSTORE