Family embraces change while honoring the past.

WILLIAM CROGHAN, a bench jeweler who began his career in Charleston, SC, circa 1907, would have been “mind-blown” to see his descendants drawing virtual fences around his jewelry store and designing gold jewelry in humorous celebration of Charleston’s infamous pest, the Palmetto bug.

Not to mention selling the occasional pricey piece of jewelry with a click of a customer’s phone.

On the other hand, William would need no explanation of the Southern hospitality, the hand-written thank you notes his granddaughters sent to each of their 15,000 customers, and their philosophy of saying, “Yes, we can do that!” before saying anything else at all.

In Charleston, SC, past meets present in creative ways.

Our survival has been based on ‘let’s try it; let’s see what happens.”

For sisters Mariana Ramsay Hay and Rhett Ramsay Outten, steering 110-year-old Croghan’s Jewel Box into the 21st century is a constant balancing act, but one they feel equipped to handle by virtue of their willingness to embrace change.

It doesn’t hurt that Charleston is in many ways the perfect location for mixing modern with vintage. It’s also been named the No. 1 tourist destination six years running by Conde Nast Traveler and Travel & Leisure magazines. The hospitable Southern city offers residents and visitors alike an eclectic mix of history and antiques, as well as the latest in dining, shopping and design. It proves to be an irresistible draw in particular for would-be vacationers who live all along I-77, which begins in Cleveland, OH and leads directly to South Carolina.

Visitors are romanced by the city, which leads to an enchantment with and loyalty to Croghan’s itself. Fully 50 percent of their clients are visitors.

“People come from away, where they may have lost their local jewelry store,” says Rhett Ramsay Outten. “So we become their jewelry store. We have four family members on the floor selling jewelry.

“Somehow, we are antique and cutting-edge at the same time. I love that we are a 110-year-old jewelry store in a 1790s building sitting across the street from the Apple store. We are dynamic. We wake up every morning and say, ‘How can we change and do this differently today.’ We’ve embraced change, and of course, having the fourth generation in the business has been a wonderful thing.”

Too many retail jewelers hang onto the image or idea of who they’ve been in the past, she believes. “Our survival has been based on ‘let’s try it; let’s see what happens.’”

William Croghan was listed as a jeweler in the city directory as early as 1907. After serving in the military in World War I, he returned to Charleston with an appreciation for the German culture and a repertoire of war stories, with which he regaled many a visitor to his small retail shop before bringing them home for a home-cooked meal. Around 1930, he had moved into the 100-square-foot side porch section of the building now owned by the family. A hand-engraver and jeweler, he spent most of his time at the bench. “He loved life,” Outten says. “There was a wonderful aura about him.”

By 2000, the family’s third generation began to expand the jewelry business into that same building. The expansion initially included a large gift section, but by 2016, with the latest renovation, they reconsidered their merchandise mix and discovered that giftware, while occupying a large percentage of available space, surprisingly yielded only 10 percent of their sales. They decided to limit giftware to best sellers.

“We have a section of the store dedicated to antique and estate, which is hugely popular with millennials,” says Mariana Ramsay Hayes. “Then we have a large horseshoe of mahogany cases that are well-lit and beautifully displayed with the latest designers, as well as a dedicated diamond counter. People walk in here and see this antique and estate jewelry and get caught up in the aura of where they are, of wanting to buy a Charleston antique, and then they walk into the other side and see beautiful diamond and designer collections.” Often their customers find creative ways to mix the two, creating stacks of rings drawn from both areas, for example.

Croghan’s Jewel Box uses beautiful photography that reflects the spirit of Charleston. They advertise in the newspaper, at the airport and even with geo-fencing.

Not only does Croghan’s offer an intimate family-store feel, but it makes staying connected to the store, the family and its inventory simple with a fully staffed e-commerce operation and an attractive, sticky new website that logs 9,000 to 15,000 visits every month. “With an audience of 27,000 followers on Instagram and 22,000 on Facebook, we absolutely love developing our online personality,” Outten says. “These two vehicles give us an opportunity to engage directly with our customer several times a day. It has been a highly effective tool to create interest not only in jewelry, but in our brand. Customers from all over the country walk in our store, phones loaded with photos from our website or Instagram.”

In rolling out the website, they also partnered with four influencers and allowed them to offer a giveaway with their favorite products. They were equipped with their own promo code giving their followers 15 percent off for two weeks on the site. The effort was highly successful, the sisters say.

E-commerce, introduced three years ago, is recognized for its growth potential and is staffed accordingly. A professional photographer spends one day a week in the store to photograph inventory. An additional three staff members manage the demands of e-commerce. “When people walk in the door and have been on our website, they know the inventory on the website better than we do,” Outten says. “We’re not having people push the button and buy the big dollar items very often, but they’re starting there and calling when they’re ready with their credit card.”

“We find people go on the website every day. It’s definitely where we see the future growth of our business.”

Benjamin Guttery: Croghan’s has mastered the art of staying true to themselves in a fast-growing resort and vacation market. And encouraging their employees to grow with them by making the workplace fun again! I love the artwork they had drawn up of the shop and building, so iconic!

Elle Hill: Such elegance and class conveyed with spirit and relevance. There’s nothing stuffy about their fun events — movie night! — and their kicky red door on the footer of their website. Relevant elegance with an old school glamour feel. Well done!

Bob Phibbs: Very fun blog about their Valentine’s event. I love the ways they connect to Charleston in new ways. 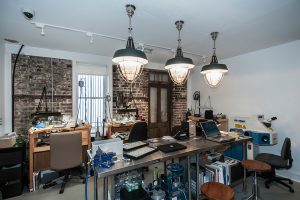 1 Concierge services. “You can buy what we have here, or some semblance of it anywhere, but at the end of the day it’s all about service,” Outten says. “When someone asks a question, we say, ‘Yes!’ first. We make dinner reservations, find tours, call up Google Maps. We’re mailing packages of stuff for them they didn’t even buy here!”

2 Geo-fencing. During the Southeastern Wildlife Exposition, which attracts more than 40,000 visitors to Charleston, they drew a virtual fence around four luxury hotels and served ads to visitors on high-end sites such as the Wall Street Journal, The New York Times, Harper’s Bazaar and Vogue.com.

3 The Goldbug collection. When fourth-generation Mini Hay, who was a sculpture and art major, was challenged with coming up with a fun item that would be collected by locals and tourists alike, she created a line of jewelry around Charleston’s most unwelcome and ubiquitous guest, the large, winged Palmetto bug, also known as the American cockroach. This gilded version has been featured in Southern Living, the Atlanta Journal Constitution, Brides, Luxe and Vogue.com. A wholesale line is also sold at more than 25 stores across the country.

4 Tried and true traditional advertising. They’ve been advertising in newspapers every other week for 110 years, and people still walk into the store with the ad clipped from the local paper. They also advertise in magazines distributed in hotels, such as Charleston Magazine and Garden & Gun.

5 Celebrating treasured jewels. Once a week the owners brainstorm with their store manager, CFO and operations manager about how to recognize and empower their employees. Some ideas: “We are constantly bringing in lunch,” Outten says. “Popping Champagne at closing. Planning fun showers or dinners to create a spirit of camaraderie. We go to plays together to support our community theater actress on staff, and we treat everyone to drinks and dinner before the performance. We call our employees ‘jewels,’ and it is our job to make them shine as bright as anything in the case.”

Virtual Shelf to Attend ‘Luxury’ By JCK in Las Vegas

Salesman Robbed of $200,000 in Jewelry Outside Hotel in Florida