A gem in the rockies

WHAT does a jeweler have in common with a pediatrician, a CPA and a movie production company? They’re all located in the new landmark Diamond Building in scenic Evergreen, CO. The jeweler is Daniel Diamonds, which built the freestanding 12,000-square-foot structure last year in the affluent foothill community between Denver and Boulder. The actual jewelry store, at a more modest 2,250 square-foot, is the anchor in the three-story building, and has windows everywhere, allowing customers to enjoy awe-inspiring views of nature that often include elk, deer, rabbits and other wildlife. Daniel Diamonds is the ultimate destination store, and after 16 years in retail jewelry in a space half this size in a shopping center, makes a nice change for owners Danny Alkayam and his wife, Karen. “Most buildings in Evergreen are old, rustic mountain stores and, typically, people don’t put a lot of money into remodeling them,” Karen says, “So we wanted something completely different: state-of-the-art, sleek, and upscale.”

And they did have faith in their location in Garner, NC — 40,000 cars pass by every day.

Anfesa Matthews had heard the expression, “The wedding begins and ends with the ring.” True enough, she thought. But why not help out in between the engagement and wedding rings? “I’ve always dreamed of having a freestanding store,” she says. “To help justify the cost of the land, we decided we would focus on offering as much as possible to brides.”

So in 2009 their dream destination store became reality — with a twist. 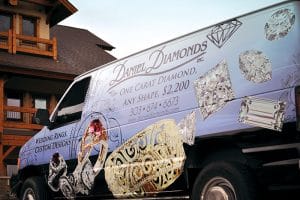 1. THE DIAMOND CONNECTION Although the store is Daniel Diamonds, Danny named the structure itself the “Diamond Building.” “Israel has the Diamond Tower, now Evergreen has the Diamond Building. Our business has been about diamonds.” Prior to opening a retail shop in 1994, Danny was a diamond importer and manufacturer. Today, he still buys diamonds from his family in Israel.

2. A BUILDING OF BEAUTY From the wrought-iron balconies to the crystal pendant lights, every detail of the three-story Diamond Building and the Daniel Diamonds store was carefully considered. “Our goal was to have the exterior complement the materials and forms of nature, while having the interior reflect the artistry and beauty of contemporary fine jewelry,” explains Karen, who was in interior design before joining her husband in jewelry. Working with a local architect and builder, the couple decided on logs, doors and windows from Finland, as well as construction that “curves and folds and melts into the natural terrain,” Karen says.

3. WINDOW TO PRIVACY When Karen and Danny were working with the interior designer on the new space, the one thing she knew she wanted was her own office. “In the old store, we had one big office and he was on the phone so much — and talking loud — so I told him, ‘We need separate offices, so we can talk on the phone at the same time!’” Danny agreed and they installed a sliding window between the two offices. A former member of the Israeli soccer team, Danny displays his trophies in his office. “They’re good conversation-starters because, on Saturdays, a lot of parents come in with their kids that they pick up from soccer and they show the kids my trophies and pictures.”

4. A DAUGHTER’S MUSIC Daniel Diamonds is a true family business — right down to the music streaming through its new elaborate sound system. Daughter Kellie works in the family business and is involved in everything from sales and inventory to social media. Danny and Karen’s other child, Ronit, is pursuing a career in the music business, but thanks to the release of her debut album, her voice is in the store daily even though she isn’t. “We play her CD constantly in the store,’ Karen says. “The genre is independent dark electro pop, so customers often remark on the unique music. I tell them it’s by our daughter Ronit, and they can get it through iTunes or go to her website, www.roniit.com. Most of the music we play in our shop is unusual and special, so Ronit’s music fits right in.” The new store was built with an elaborate sound system, so they can play CDs, radio, iTunes, and stream music in through Pandora. “The music we play changes, depending on our mood. It really can be a lot of different things — classical, electrical, acoustic, country.” Some other favorites include: jazz, like Brio and Chris Botti; trip-hop like Morcheeba; or electronic like Pretty Lights.”

5. MOBILE MARKETING You could say that Daniel Diamonds has its marketing covered — because, for the past two years, this cost-conscious jeweler has been using “wrap advertising,” decal-like vinyl vehicle wraps that easily cover the sides of any car, truck, van, or bus and turn it into a mobile billboard. “Here in Colorado, outdoor ads are expensive,” Danny says, “so these have been a great promotion for us.” He bought a Mini Cooper two years ago expressly for this purpose and it’s so effective that he recently purchased a large van to add to their traveling ad arsenal. “Danny drives all around town with the wraps,” says Karen, “especially in areas with lots of people and visitors.”

1. HOW DID YOUR YEARS IN WHOLESALE PREPARE YOU FOR RETAIL? It helped me in many ways, but it especially saved me from making a lot of mistakes. Remember, I spent a lot of time waiting in stores to work with the retailers, so I had a lot of time to watch and learn what to do and what not to do.

2. WHAT DID IT TEACH YOU NOT TO DO? The stores that did well always had good lighting, showcases that were uncluttered with not too many colors in them, did interesting marketing and, of course, treated customers well.

3. HOW DID YOU MAKE IT THROUGH THE RECESSION? By buying gold. For us, 2007 was a very bad year. Then we went to Tucson in 2008 and I saw a friend there who told me about someone doing very well by buying gold from the public. Until then, I thought of buying gold from customers as a service, not a business. So I decided to try it and I put an ad in the newspaper, saying we’d buy gold; in our town, we were the first jeweler to do this. It worked out so well for us because we make over 75 percent of our jewelry custom. And, because of that, we added 1,200 new names to our mailing list and those people who came to sell us their gold are now our customers.

4. ANY ADVICE TO A JEWELER WHO FEELS STUCK IN A RUT? Advertise. I realize that advertising for jewelry is not the most rewarding because it’s not immediate, like advertising coffee or bread. But even bad advertising is good, because when the customer does need jewelry for an anniversary or birthday or something, it’s your name that will come to mind.

5. WHAT SETS YOU APART FROM OTHER JEWELERS? With my family in the diamond business in Israel, we have the contacts, so if they see a stone they know I’m looking for, they put it aside, and I’m able to get what diamonds my customers want. Also, because of these contacts, we’re able to keep our prices low but the quality high.

Related Topics: Daniel Diamondsjewelry stores in Colorado
click to Comment(Comment)
Up Next