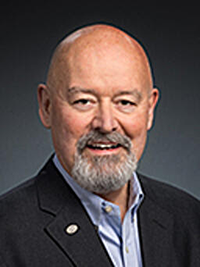 Sexton began his association with Jewelers Mutual in 1980 as an Underwriting Assistant and enhanced his career through roles in commercial lines customer service, CL underwriting, and specialty account management, becoming vice president of Loss Prevention and Consulting in 2004.

In this critical loss prevention leadership role, Sexton was responsible for the development, recommendation and implementation of Jewelers Mutual’s loss prevention policy. He is credited with building key relationships between Jewelers Mutual with the jewelry, alarm, and law enforcement communities, to effectively promote comprehensive loss prevention strategies to reduce jewelry exposures to loss.

“It was never about me, it was always about us,” Sexton said.

Sexton will officially retire from Jewelers Mutual on December 31, 2019, however he plans to remain involved with the company for the foreseeable future through engagement with Jewelers Mutual associates, jewelry associations at industry events, and collaborations with agents/brokers. He will continue to work with the Jewelers Mutual executive team to ensure key relationships and partnerships he has helped forge remain strong.

“I will always treasure the relationships I have made during my association with Jewelers Mutual,” Sexton said. “My retirement is not an end, but rather a beginning. The leadership of Jewelers Mutual has a clear path for continuing our vital loss prevention mission to provide innovative risk management solutions for the industry we serve, not just insurance.”

Sexton, a member of the 24 Karat Club of New York, currently serves on the Board of Directors for the Jewelers’ Security Alliance, a nonprofit association devoted to reducing crimes against the jewelry industry, as well as the Canadian Jewellers Association. In 2016, Sexton was the recipient of the Jewelers’ Security Alliance Industry Service Award and in 2018 he received the American Gem Society’s John J. Kennedy Law Enforcement Award.

Sexton has served on the Underwriters Laboratories (UL) Security Systems Council, formerly known as the Burglary Protection Council, since 1994 and also serves as a corporate member of UL in the insurance category. He served on the Central Station Alarm Association’s Insurance Liaison Committee, which assisted in the development of the Underwriters Laboratories (UL) burglar alarm modular certificate program and remains active on several UL/ULC Standard Technical Panels through which UL/ULC develops and maintain their standards for safety.

“You’re known by the company you keep,” Sexton said. “It’s all about the people. Working with people to help them solve their risk management challenges has really been the most rewarding aspect of my insurance career.”

Jewelers Are Less Than Optimistic About a V-shaped Recovery

Can We Just Talk About Jewelry For A Change?

Here Are The Four Jewelry Trends Making Waves In 2020

Looters Hit Jewelry Stores in Cities Across US