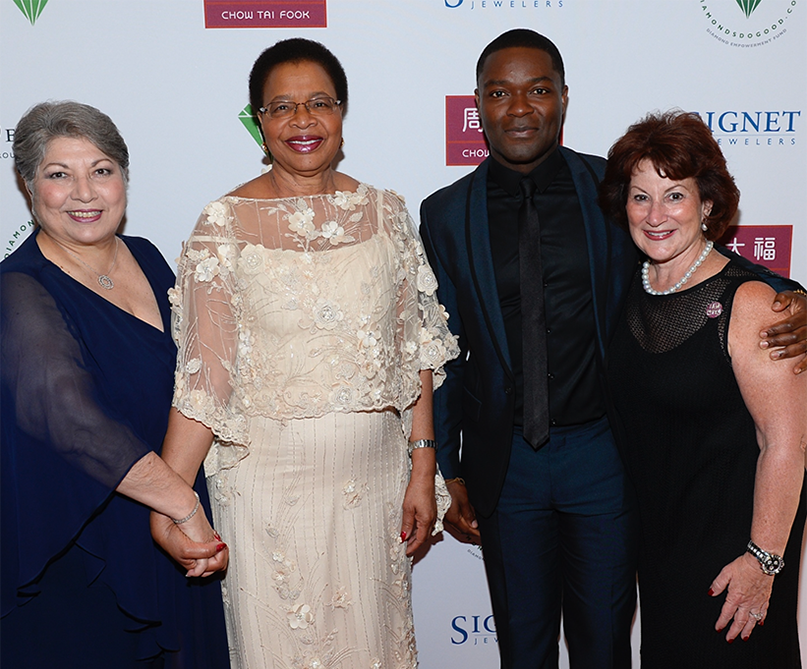 (Press Release) LAS VEGAS, NV – On the eve of the opening of JCK Las Vegas, the Diamond Empowerment Fund (D.E.F.) raised over $1.06 million to provide scholarships and assistance to empower young people globally. Anna Martin, D.E.F. president and vice president of global develompent and beneficiation, GIA, said: “This event symbolizes the collective good the diamond and jewelry industry continues to do in communities around the world where they do business. Not enough consumers are aware of this positive fact.”

“This gala more than any event reveals the consistent passion and love of the diamond industry to help improve the quality of life of millions of people internationally,” emphasized Dr. Benjamin Chavis, co-founder of D.E.F.

Kansas City, MO-based Helzberg Diamonds was awarded the Diamonds Do Good Corporate Legacy of Philanthropy Award for their outstanding contributions in bettering communities across the U.S.

“We are in the business of celebrating love,” says Beryl Raff, CEO of Helzberg Diamonds. “As a business we share this love by building up communities across the nation.”

Award winning actor and global philanthropist David Oyelowo was awarded the Diamonds Do Good International Vanguard Award for his dedication to empower communities in Africa.

“Enabling girls to be educated will change the dynamics of persistent poverty in countries like Nigeria where out of a staggering 10.5 million out-of-school children, the majority are girls,” says Oyelowo.

Graca Machel, former first Lady of Mozambique and South Africa and and the widow of former South Africa President Nelson Mandela was awarded the Diamonds Do Good Global Humanitarian Award for her international leadership to transform the lives of women and girls throughout the world. Says Machel, “I am incredibly humbled to represent the millions of minds, hearts and hands that have sown seeds over the years to empower Africa’s women and children. I graciously receive this Global Humanitarian Award from the Diamond Empowerment Fund on behalf of those who have worked tirelessly with me to accelerate social change.”

Sadhvi Shilapiji, headmaster of Veerayatan’s colleges based in Gujarat, India also was a guest presenter who thanked D.E.F for supporting the education of the youth of India.

The event marked the 10 th anniversary of the Diamond Empowerment Fund which was co-founded by Russell Simmons, visionary and business mogul, after inspiration and encouragement from Nelson Mandela and Graca Machel in their home in Mozambique.

“Without the help of the Botswana Top Achievers program and the Diamond Empowerment Fund I would not have been able to be pursuing my Ph.D in geodetic science which involves using satellite positions to find gravity over the earth,” said student Nlingi Habana.

7 Display Ideas to Add Contrast and Make Your Jewelry Pop