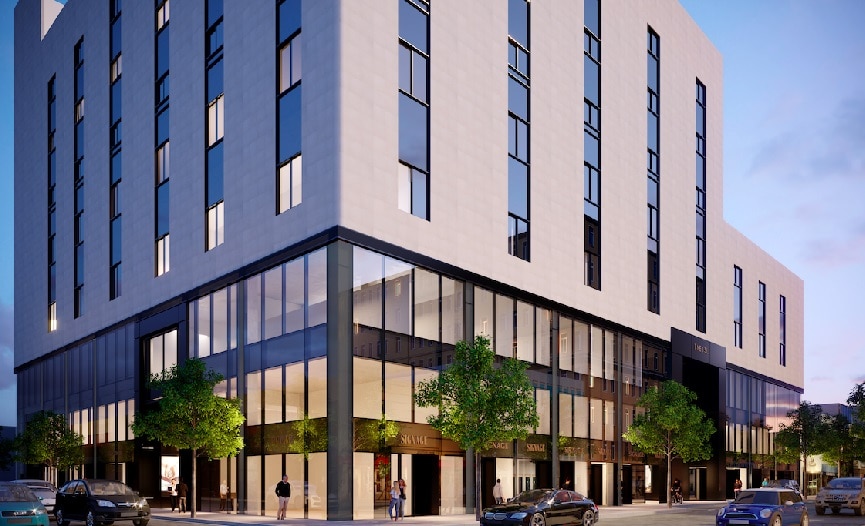 Nearly two years after acquiring the building, the developer has extended its corporate brand to the 225,000-square-foot building, according to a press release. Located at 1 NE First St., Time Century is undergoing a $50 million makeover led by architect Kobi Karp. Construction is scheduled for completion in 2022.

“Located in the heart of Downtown Miami, Time Century will be the premier destination for luxury jewelry retailers, wholesalers, consumers and watch enthusiasts,” said Dan Deutsch, managing director for Time Century. “Historically, the former Metro Mall was a major shopping destination, and today we are focusing on the future of Downtown Miami, which in recent years has seen a wave of redevelopment and repositioning of historic properties.

“Time Century marks a new beginning for one of the largest jewelry districts in the country that continues to grow in importance. For example, since the beginning of the pandemic, jewelers in Downtown Miami have been busier than they were prior to Covid-19, as the price of gold hits record levels.”

Time Century’s renovation will give way to four floors of luxury jewelry retail and wholesale space as well as four additional floors of offices. A large three-story atrium with newly designed escalators and computerized directories will direct customers throughout all levels. Most tenants will have unobstructed signage viewable from the main floor. With glass storefronts, soaring ceilings, elegant escalators and elevators, and state-of-the-art security, Time Century is attracting local, regional and national tenants. This will be the first luxury high street retail property in the jewelry district. The retail space is already 50 percent pre-leased.

“From the architectural style to the official name, every aspect of Time Century was designed to appeal to millennials, Gen Z and Baby Boomers alike,” said Isis Pellegrino, who handles in-house leasing for Time Century. “To the younger customers, unique experiences and connections to brands and spaces play an important role in choosing where they shop for fine jewelry. It is important to evolve and remain competitive so our tenants can grow and thrive for generations to come.”

A “game-changing” benefit for customers will be Time Century’s own valet parking service and the several newly built public parking garages steps away from the building, according to the release.

Located along NE First Street and E. Flagler Street, Miami’s vibrant jewelry district is home to more than 300 jewelry stores in a four-block radius. The district generates more than $850 million in sales annually.

Want To Survive the Recession? Here’s How to Focus on Bridal

LVMH Cancels $16.2B Acquisition of Tiffany

INTERGEM Presents: The Long Night of the Gemstones

BIJC’s Inaugural Together by Design Competition Comes To a Close