MODERN FAMILY STAR Eric Stonestreet recently popped the question to long-time girlfriend and pediatric nurse Lindsay Schweitzer with an oval-cut diamond ring. The two-time Emmy-award-winning comedic actor, who plays Cameron Tucker on the ABC hit series, chronicled the happy news with a series of amusing photos on his Instagram page. His caption read, “She said, ‘She’d have her people call my people.’”

A closeup look at Schweitzer’s new ring, reveals a sizable oval-cut center stone, surrounded by a halo of much smaller accent diamonds. The band seems to be a simple split-shank design.

In the days that ensued, the 49-year-old actor (he’ll turn 50 on September 9) took some ribbing on Instagram because he looked so much older than his fiancée, who is nearly 42. Nevertheless, Stonestreet rolled with the punches and reposted a few of the couple’s engagement pictures that he cleverly edited with an aging filter.

Along with the edited photos, he wrote, “Apparently a lot of people think I look too old, as a 49 year old man, to be engaged to my almost 42 year old fiancé. Look, she can’t help that she looks so great at 42 and I can’t help that I apparently look like her grandad so, I fixed it for everyone. #engaged #love #engagedlife #herlifeforever #imfunny #shesaidyestothis.” He punctuated the post with an engagement ring emoji. 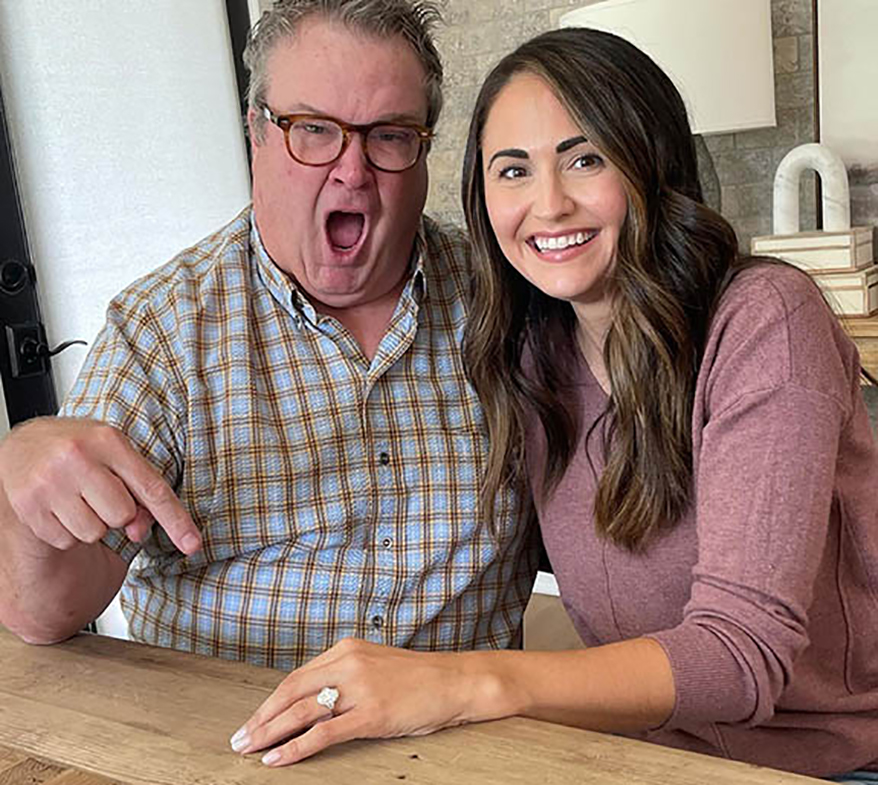 Stonestreet’s light-hearted response to the Instagram trolls was picked up by a slew of high-profile celebrity outlets, including Insider, Eonline, People, The Blast, Hello Magazine and Yahoo News. Stonestreet and Schweitzer met at the Big Slick charity weekend in Kansas City in 2016 and have been dating ever since.

The engagement announcement on Instagram also sparked an outpouring of well wishes from his fans (he has 2.3 million followers on Instagram) and celebrity brethren.

Gwyneth Paltrow chimed in, “YAY!!! We are so happy for you.”

Stonestreet posted several of the couple’s engagement pictures he had edited with an aging filter.

His Modern Family co-star, Sofia Vergara, told the TV show Extra: “I was so happy for him because, you know, she is amazing. He deserves to be with someone like her. I was telling him, ‘Finally!’ Because they’ve been together for a long time.”

Back in 2017, Stonestreet opened up about his relationship with Schweitzer during an appearance on The Ellen DeGeneres Show. The host joked that having a nurse for a girlfriend was perfect for him because his is such a hypochondriac.

Stonestreet replied, “I’m a big baby, too! She calms me. She calms my nerves! I’m a very high-strung person.”

5 Reasons Why Live Chat Is Important for Your Jewelry Business