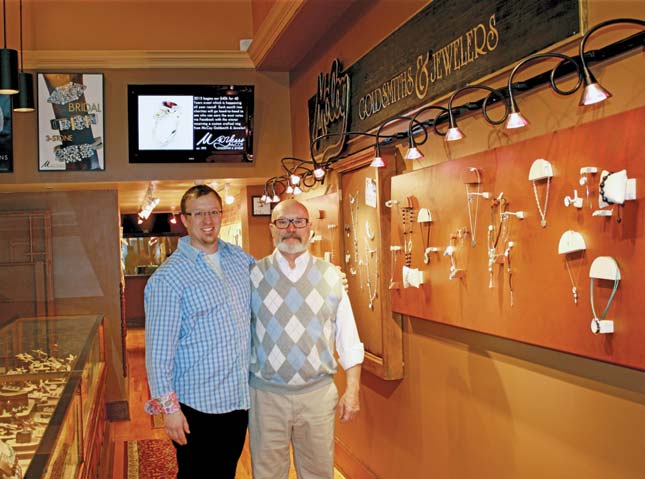 BY THE INSTORE TEAM

Published in the May 2013 issue

Jonathan McCoy’s re-entry into the jewelry world came via the rather unlikely route of roof trusses. Having grown up in one of Dubuque, Iowa’s best-known jewelers, he left home to study computer science and ultimately pursue a career in tech that took him to Hawaii. It was there, while consulting with a construction company, that he became proficient with CAD/CAM.

When he finally returned home in 2006, his father, Rob McCoy, had just taken receipt of a Gemvision design system and mill. It was a bold choice for Rob, who even today likes to keep a sketching pencil close by.

“Dad was challenged by email and attachments, never mind an intensive 3D design program,” says Jonathan. “I thought this is something I can help him with.”

From a few hours a week, the younger McCoy’s involvement in the store steadily increased as the business completely revamped itself from a one-man custom and repair shop to one driven by CAD/CAM production with a sharp focus on bridal sales.

The merging of Rob’s traditional design skills and aesthetic values with Jonathan’s tech know-how proved to be a winner. Sales surged more than 270 percent between 2007 and 2012 while average sale climbed to $1,040 from $275.

“Utilizing Matrix, prototype rings and later CounterSketch, we built a lean business model that was light on inventory, but strong on design and manufacturing capabilities,” Jonathan says.

The shift to CAD/CAM design was only half the story and indeed, through 2007 the increase in sales was only modest. The real growth arrived with a decision to “plant their flag” in bridal, which corresponded to a wider trend of jewelry buyers seeking out unique pieces.

“People get engaged all year,” Jonathan says. More important, “when it comes to the business of bridal, people always find the money to pay for the ring,” he adds.

Business exploded with custom bridal orders increasing five-fold as customers sought to add a distinctive personal touch to their engagement rings, bands, or to restyle their first rings.

Customers’ willingness to order based on an image from the McCoys’ computer-based catalog, which is admittedly vast, surprised even the McCoys. “People now are much more willing to work off photos,” says Jonathan, adding that shoppers have embraced the opportunity to experiment with different renderings, different centerstones, different materials and different accent stones. The growth was supported by another major strategic decision to move much of their marketing online, and to rethink their natural market as being one far beyond “this part of this town,” Jonathan says.

When it comes to bridal, people find the money” JONATHAN McCOY

“When we first started our online marketing with Google Ads, a Facebook business page, even Twitter, we were unsure if we were ever going to be able to monetize these marketing efforts. Over the last year, 50 percent of our sales of custom bridal were derived from online,” he says.

The McCoys have aggressively pursued positive reviews, rewarding referrers with jewelry cleaner and even dinner at a local restaurant. “We were getting people from over 100 miles away drive in based on an online review. It’s money well spent,” says Jonathan.