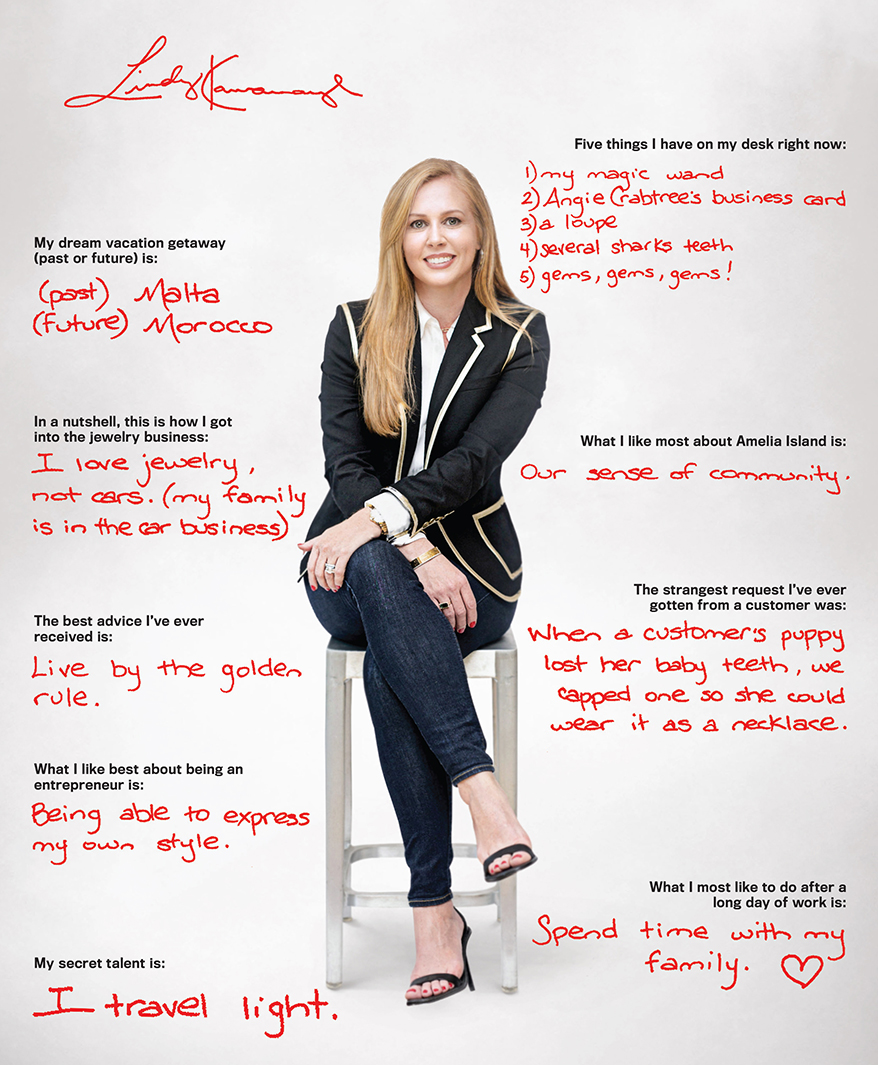 Although Lindy Kavanaugh loved moving to New York City at age 24 to pursue a GIA degree in gemology, she always planned to move back home to Fernandina Beach, FL, on Amelia Island, to open her own jewelry store.

By age 18, Lindy had turned her childhood love of jewelry into a job as a bench jeweler for a shop in Fernandina. That led to a job with Underwood Jewelers in Jacksonville, FL, where owner Clayton Bromberg instilled in her a mind-opening curiosity about gemstones. “When I first started in jewelry, I was just an apprentice,” she says. “I was doing all the grunt work like polishing and casting, but when I went to work at Underwood’s it was a different environment. He always encouraged his employees to be more interested in the gemology side of it, to know the product.” After college at the University of North Florida in Jacksonville, she enrolled in the GIA.

“I was 24 when I moved to New York. My mom and I took the train up and I had never been to New York. It was January and freezing cold!” But she loved it anyway. After earning her graduate gemologist degree, she landed a job with Tiffany & Co. on Fifth Avenue. “I found a place to live with a friend, borrowed money from my brother and sister to rent an apartment and I stayed in New York until I couldn’t afford it.”

It was time to go home anyway to pursue her retail dream. And she met her husband, Hardee, just a few months after she returned.

She found an amazing space to rent, a former bank building that had a vault with a beautiful door, all brass and hand-engraved etched glass. The timing wasn’t auspicious. She opened on Sept. 12, 2001, but the fact she had ties to the community made it a success. “My husband is the eighth generation of his family to live in Fernandina; we had a big support group and that’s how I was able to make it. That’s so much of why I love where we live. It’s a great little community.”

After 15 years she had the opportunity to buy a building about half a block away, which happened to be built by Hardee’s great, great uncle in 1903. “I had thought the worst thing you can do is to move or change the name of your business, but we moved and it has been a really good thing!” she says.

Kavanagh carries designer brands, some of which are exclusive to the store. “We’ve decided to listen to our instincts more when buying,” she says. “Prior to our move in 2016, we were a bit more like a traditional jewelry store, but we’ve realized that our customers have come to expect more than that from us. So, we are buying only pieces we absolutely love.”

Lindy is living her career dream while also balancing the care of “a gaggle of children.” She and Hardee have three kids: Kate, Will and Eve, the youngest, who seems at age 10 to have inherited her mother’s eye for jewelry.

Related Topics: jewelry stores in FloridaMy Life
click to Comment(Comment)
Up Next

Take Leave of the 21st Century With an Amish Hour