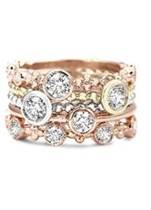 President of Forevermark US Charles Stanley explains, “With The Forevermark Tribute Collection, we are celebrating the evolving cultural landscape and heralding women for their depth and complexity. While symbolic of love, Forevermark diamonds can also represent an individual’s character, growth and personal journey. It’s time to tell her story.”

The collection is comprised of an assortment of layered pendants, stackable rings and drop earrings available in varying sizes starting from 0.10 carats as well as a variety of diamond shapes set in 18k white, yellow and rose gold. The pieces can be harmoniously stacked or layered to pay tribute to the individual characteristics, style and personality of the woman wearing them.

In conjunction with the Forevermark Tribute Collection, a multifaceted marketing campaign will drive consumers in-store with the emotional, call-to-action concept celebrating a woman’s unique attributes and personal achievements.

Comprised of a television commercial, print, digital and social creative, the campaign will motivate gift giving not only between couples, but also between generations, sisters, friends, and for self-purchase.

Directed by Hugo Stenson, the commercial was filmed on location in Toronto, Ontario, and features a cover of the Fatboy Slim song “Praise You.” The commercial debuts nationally on November 6th during ABC’s Dancing with the Stars, followed by CBS’s Scorpion, with :30 and :15 second spots on network prime stations including ABC, CBS, and NBC, as well as on numerous male-targeted cable networks such as ESPN, NFL Network, Discovery, Science, Velocity, History, as well as during Sunday NFL Football and in Screenvision network of cinemas nationwide.

Digitally, The Forevermark Tribute campaign launched on October 11th and will run through Christmas including paid search, paid social media, and on targeted networks, and mobile and premium websites such as Who What Wear, BBC, Bloomberg, The Atlantic, Washington Post, YouTube. Goop, ESPN, and Pandora.

The Forevermark Tribute Collection and accompanying campaign launch on the heels of the De Beers Group’s announcement made last month partnering with UN Women to empower women in its diamond producing countries, across its businesses and in its marketing campaigns.