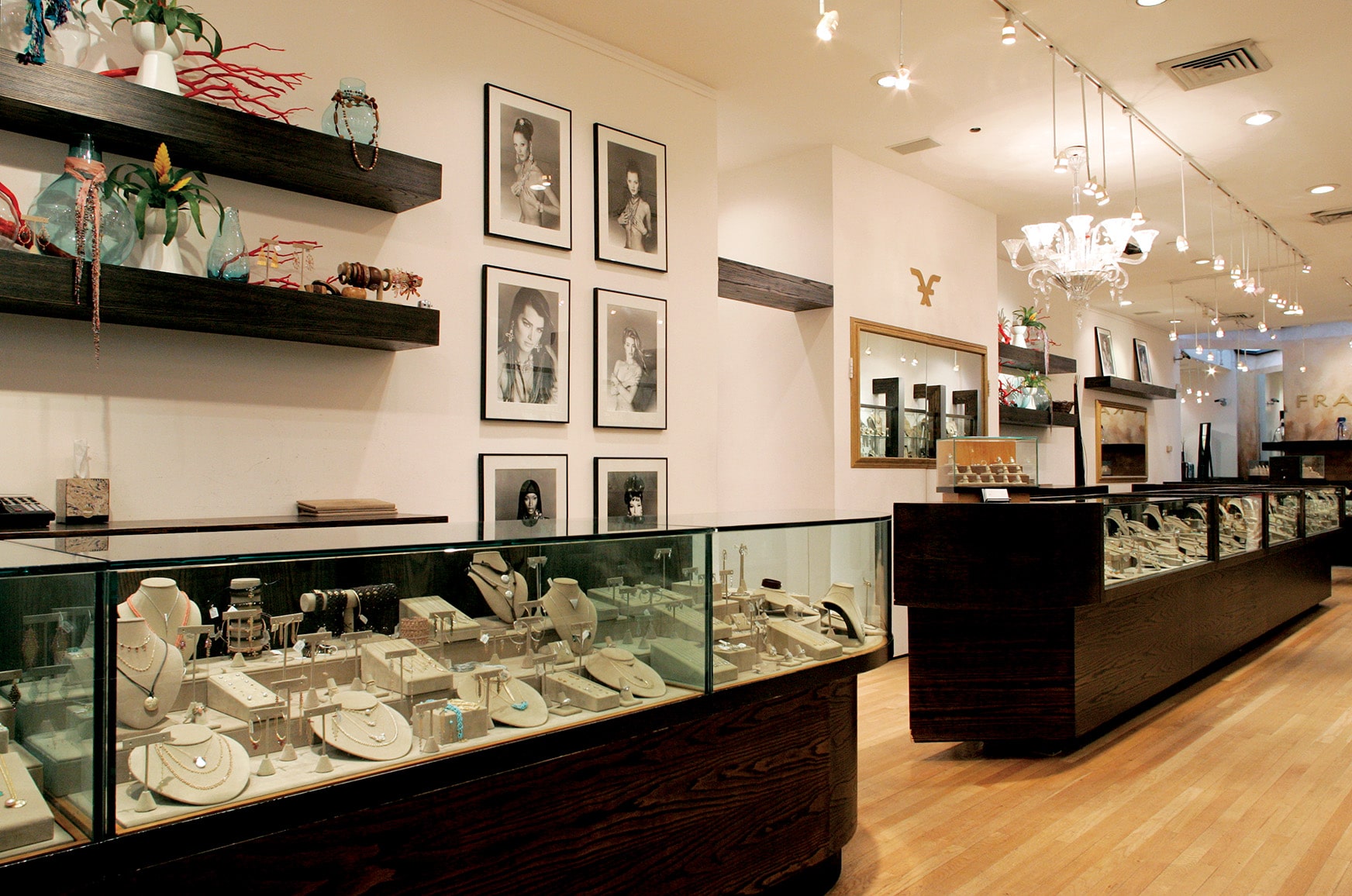 THE SOHO STORE Fragments represents a bit of magic, for both owner Janet Goldman and her customers.

Goldman was a clothing designer and divorced mother of two living in a one-bedroom apartment in Soho when Fragments began. She had sold her house to raise the money to open the business.

“If you believe in yourself and have a passion for something, you must persevere,” she says. “Of course, I think I was lucky. The whole business has been very serendipitous.

“I am passionate about jewelry. I wanted to be able to create an environment where magic happens. It’s a place where we delight our customers, we tempt our customers. We have beautiful things to offer them and we have a great time together. Fun and pretty things are the name of the game.” 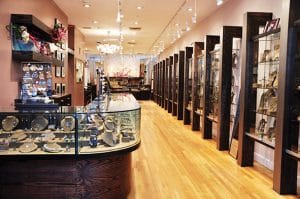 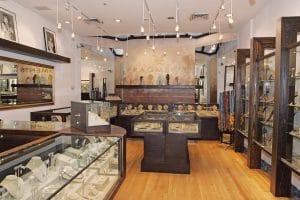 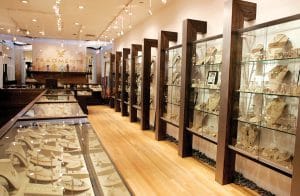 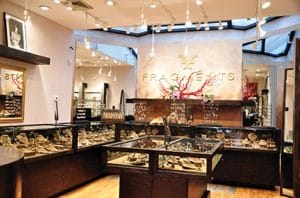 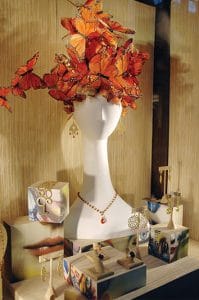 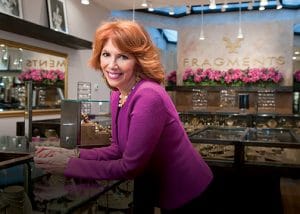 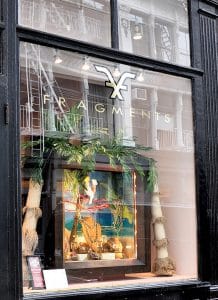 1. THE NAME.  Fragments began in 1984 as a wholesale business representing designers of costume jewelry. Under the umbrella of the name Fragments, the designers were the pieces that made up the whole.

“We always positioned ourselves as the high end of the market, even in costume jewelry,” Goldman says. In 1994, she enrolled in a Harvard OPM (owner/president management) program and realized she wanted to go into retail.

2. A LABORATORY.  She introduced the retail line at Henry Bendel’s, garnering valuable retail experience in the process, but soon decided she wanted more control.

Goldman’s retail store began as a laboratory, an experimental workshop for the talent she was developing. It did — and still does — afford valuable and immediate feedback both from retailers and from consumers for the 30 to 35 designers she represents.

“I had a showroom at 107 Greene Street,” Goldman says. “I cut off the front quarter of the showroom and that was the store. So when customers came to shop wholesale they had to walk through the store. I didn’t realize what a good idea that was initially. Retailers can see how a particular designer’s work will look in a retail environment.
“We’re known for discovering and launching the careers of today’s most celebrated designers.”

3. POINT OF VIEW.  From costume jewelry, Fragments graduated to silver and then gold, as her customers’ tastes evolved. “We still keep touches of costume and silver; we want to have something for everyone’s price range,” she says.

When Goldman started Fragments, she relied on her gut instinct rather than market research to choose inventory. “I bring my own point of view. I like glamour, I wanted something slightly over the top. I’m attracted to anything sparkly and a little bit rock ’n’ roll.

At the time of Fragments’ launch, fashion jewelry was tailored. But Fragments went in its own direction.

“Fragments was anything but tailored and it wasn’t craft jewelry, either,” she says. “It was unique and fresh jewelry that was trendsetting. A customer comes to us when she wants to be unique. My mission is to help them discover their own style. To mix many different designers in one palette. The sales people know their customers so well that we create the look over time.”

4. MARKETING.  “For a long time we didn’t do any advertising,” Goldman says. Now there are postcards, direct mail, e-mail, Facebook, Twitter and her blog, Jewel Talk With Janet.

Still, marketing is largely word of mouth and celebrity driven. Many of the best endorsements come from the red carpet, editorial placement in magazines, and celebrities, including customers Debra Messing, Whoopi Goldberg and Britney Spears. Even First Lady Michelle Obama has worn jewelry from Fragments — Jordan Alexander’s navy pearls.

Fragments partnered recently with Refinery29 Reserve, a commerce platform that connects brands with style-conscious customers, to offer an opportunity to buy discounted gift cards. With over 2 million monthly visitors to the site, the tie-up increased Fragments’ visibility and drove new customers to the store. “We’ve become a destination store,” Goldman says. “Customers shop here and tell their friends it’s a place to stop when you’re in New York.”

5. THE SHOWROOM.  Goldman describes the look of the store as being an extension of herself — the self who has been a Soho resident for the past 30 years. “You get that Soho vibe. It’s casual, but it has a little bit of glamour to it.

There’s nothing pretentious about the space. It’s very user friendly.”
A big mirror in the back of the store makes the space look twice its size. All the merchandise is out and visible — cases line all of the walls. “Fun and pretty things are the name of the game in jewelry,” Goldman says. So why hide it?

The original Fragments location shared space with fashion photographer Francesco Scavullo, who dressed nude supermodels such as Kate Moss, and Claudia Schiffer with layers of Fragments jewelry. Those original photographs now decorate the walls of the boutique.

1. WHAT QUALITY DOES ALL FRAGMENTS JEWELRY HAVE IN COMMON? It’s always been handmade jewelry from the beginning, even when it was costume. I love to see the hand of the artist in the jewelry. It becomes more personal to you than something that’s manufactured.

2. HOW DO YOU SELECT DESIGNERS FOR FRAGMENTS? It’s an emotional gut reaction that I have and my staff of many years also has. When we see something that we haven’t seen in the market before, that’s when we feel it’s something we’d like to bring into our family of designers. We feel we have the cream of the crop of designers here.

3. WHAT DO YOU LOOK FOR IN EMPLOYEES? I don’t hire very often because people stay a very long time. When I do hire, I want them to be resourceful, to think on their own. They should have personal warmth and be intelligent enough to learn. I hire people who love to shop. We have a great time and our customers have a great time.

4. WHAT IS YOUR SALES PHILOSOPHY? The staff at Fragments is my family. I truly care about them and they care about me on a personal level, and that carries through to the shopping experience. There is a happy feeling in this store. We play with the jewelry and our customers have a great time. We greet them, tempt them, delight them, and dare them. We get them to push the envelope a bit.

5. WHAT SETS FRAGMENTS APART FROM THE COMPETITION? Customers feel that what they’re buying is a little bit cool. We might have things that are sold in other stores, but when they buy it in Fragments, they feel a connection.

Related Topics: Fragmentsjewelry stores in New York
click to Comment(Comment)
Up Next