Just when you thought you had attended your last trade show for a while, you turn around and find yourself in the Sky Priority lane once again, dragging your hundreds of pounds of luggage (mostly boots) to the curbside check-in and praying to the travel gods that the clerk won’t charge you for being over the weight limit. By “you,” of course, I mean “me,” and by “over,” I mean “vastly over.” But when the destination at the end of your journey includes golden treasures, beautiful accents, and loads and loads of prosecco and cured meats, you tend to momentarily forget all your travel woes, because you know that if given the opportunity to change what you do for a living, you wouldn’t – not for anything in the world.

The January 2018 edition of the VICENZAORO Jewellery Boutique Show in Vicenza, Italy was the first major jewelry trade show of this year, and since we often look to the Europeans to see which trends will carry over to the United States, there’s a good sign that a well-attended jewelry fair will translate to a successful trade show season at home.

Attendance was up 10 percent at this year’s January edition of VO in comparison to 2017, which is fantastic considering the fair immediately follows the Salon International de la Haute Horlogerie watch fair in Geneva, causing some retailers to have to split their buying staff in order to attend both shows. In terms of buyers from the United States, I noticed several, including those from department stores such as Saks Fifth Avenue and Ross, as well as reputable brick and mortar retailers like London Jewelers out of New York. But just like with the September edition of the show, the buyers in attendance in VICENZAORO January are as different as they can be, hailing from Russia, China, Turkey, and many parts of South America, just to name a handful of places. In fact, after back-to-back experiences with VO, I am finding it to be one of the most diversely-attended jewelry shows in the world. 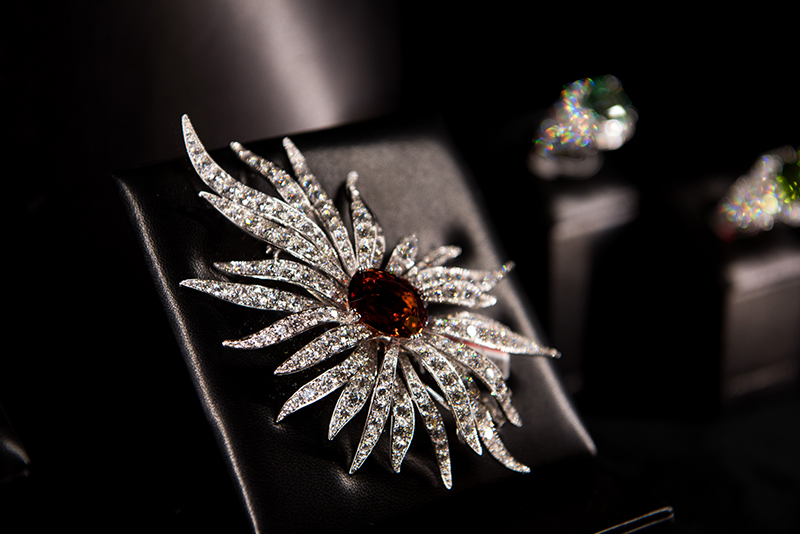 In terms of trends coming out of the show, there were several, but they varied depending on whether you were looking at high-end luxury jewelry or affordable, fashionable, and fun jewels. On the playful side, text and emoji rings, bracelets, necklaces, and earrings seemed to be everywhere, but rather than being created in precious metals, I saw them in alternative materials like silicon, brass, and even in cameo form. Colorful jewelry using silk, beads, and a variety of enameling techniques were abundant in the show’s “GLAM ROOM” which houses up-and-coming contemporary jewelry artists who are often looking to try the fair out for the first time. In “THE DESIGN ROOM,” however, world-renowned designers such as Brazil’s Fernando Jorge got playful with diamonds and silhouettes, showcasing simplified works with hugely stylish impact. And in Hall 7 – where many of the show’s big-name brands exhibit – we saw candy-like colored gem combinations from Italian jewelry house Falcinelli, and clusters of champagne diamonds in various shades forming bold statement rings by Mariani. Some of the trends we saw were ones that have been around for a while, but with cooler, more creative twists, making them appear fresher to the onlooker.

As mentioned in my previous coverage of VICENZAORO, the Italians – at the end of the day – simply know their jewelry, and its clear that means they also know their jewelry shows. VO treats their buyers and hosted press with respect, kindness, and the warmth we’ve all grown to love about the country of Italy and its people. The Italians, over time, have taught the world how to enjoy the finer things in life; how to value art, romance, and food; and they continue to teach me lessons every time I step foot on their terrain.

I’m looking forward to whatever comes next out of VICENZAORO, and that includes new designers and trends I’ve yet to discover, but until that moment comes, I bid the country, the fair, and its resident jewelry lovers a fabulously fond, “Arrivederci!”

Related Topics: Barbara PalumboFalcinellitrade showsVicenzaoro
click to Comment(Comment)
Up Next

From Diamonds in Glass to Affordable Bezel-Set, Here are 5 Hot New Jewelry Collections

Here Are 18 Images of the Latest in Rings