What was different about the jewelry this year?

After several days of seeing images of celebrities at Sunday’s 89th annual Academy Awards, you might be wondering what was really so different about their jewelry this year. (Maybe?) I mean … so Jessica Biel’s neck sparkled in a glitzy — albeit fringe-ily unusual — diamond collar from Tiffany & Co.’s high jewelry Blue Book Collection. Frankly, I thought Charlize Theron’s 48.8-carat “Secret Cluster” Harry Winston diamond sautoir, seen at the 2016 Oscars, was every bit as dazzling.

Whether you agree with me on that or not, it’s important to consider, in context, all the razzle-dazzle of Oscars ’17. Here are my top picks for jewelry trends that, in fact, will matter to most of us this year.

From unforgettable ear climbers on Isabelle Huppert and Viola Davis to large Nirav Modi diamond studs on model Karlee Kloss to the ϋber-in-diamonds Chopard pendant earrings on Charlize this year, Hollywood’s A-listers came on strong for statement pieces. It’s a pivotal moment (especially in earrings) when style-setting stars of the big screen finally understand that small simply doesn’t cut it on the red carpet. Dare I say: brava? In retrospect, looking at the last few years of Oscar, Emmy and Golden Globe red carpets, I believe it’s a kind of “Lorraine Schwartz effect.” Certainly the California jewelry designer didn’t create long earrings but, after seasons of seeing those gargantuan earrings on more than a few celebrities, it appears the look has finally become as go-to as those once ever-present small diamond studs.

This year, Isabelle Huppert — Best Actress nominee for “Elle,” and sometimes referred to as “France’s Meryl Streep” — wore one of the best ear climbers I’ve seen on the red carpet in awhile. Her Repossi 18K diamonds up-the-lobe crawler (a single, on her left ear) was a strong statement and also beautifully echoed the Swarovski crystals on her elegant pale pink Armani Privé. 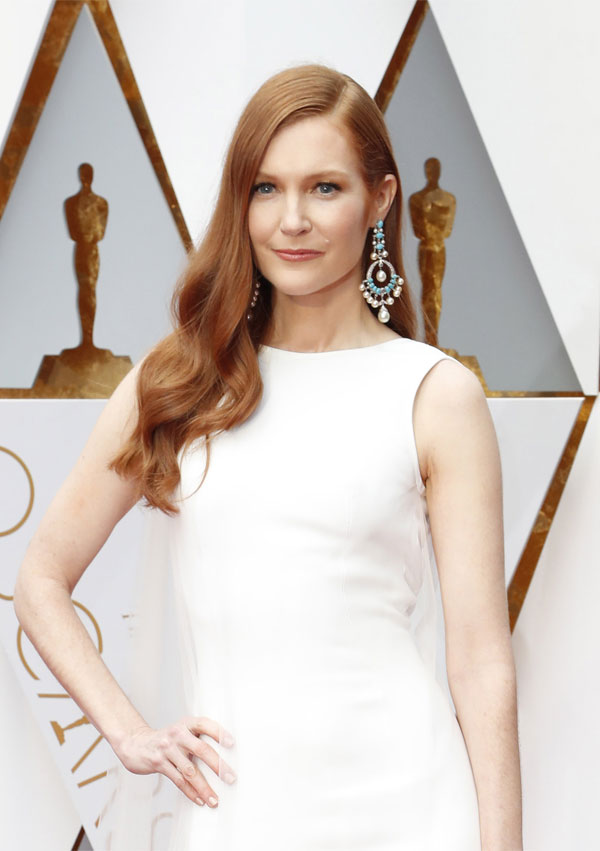 At first read, it may seem strange that I’m pointing to a dress style as a significant Oscars jewelry trend. In truth, I didn’t see any actual ankle bracelets. Nonetheless, that’s my point. At the 2017 Oscars, the second most talked-about fashion item was the shoes. Not the clutches, as with previous red carpets. Why? Because short-in-front/long-in-back as well as calf-grazing tea-length was a directional dress at this year’s Academy Awards. From Felicity Jones in her Dior ballerina-style tulle tea-length, to last year’s Oscar-winning Alicia Vikander in a black bi-level LV, it was the silhouette for style-setters to be in. And, quite simply, as a result of no ankle bracelets in sight, sexy and embellished sandals were front-and-center. Among my favorite footwear were Jones’ Louboutins and Vikander’s Louis Vuittons. But surely my choice for best shoes of the evening would be the dazzling Calvin Kleins on Oscar nominee Naomi Harris. To be specific, though, only one of Naomi’s sandals was, in fact, crystallized. (Hopefully, jewelry designers are taking notes, here, and readying to point out some new jeweled ankle options to stylists for future awards shows.)