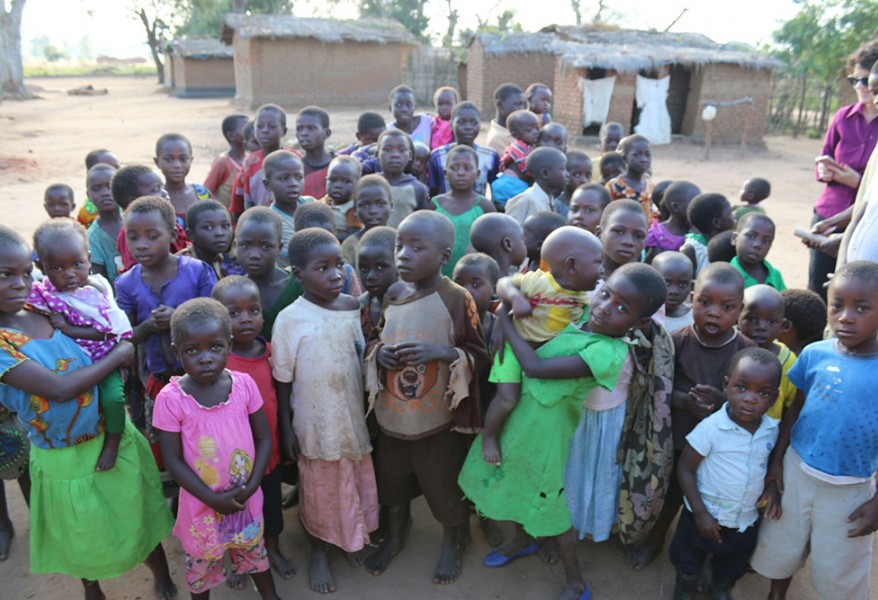 The 70 children of the Luzi Children’s Orphanage near Lilongwe, Malawi have all been orphaned by different circumstance and are cared for by the Orphanage, which provides shelter, food, and school fees. They are currently seeking to sustain themselves through gem rough sales.

Since 2010 Roger Dery has led retailers and other jewelry industry professionals on dozens of trips to East Africa to visit mines, lapidary schools and orphanages.

Amid the adventures, education and elephant spotting, his guests couldn’t help but notice that Dery, president of Roger Dery Gem Design, reached out to help everyone he encountered along the way.

Chrysa Cohen of Continental Jewelers in Wilmington, DE, joined him in June.

“Roger gives back wherever he goes, whether it’s visiting the miners and bringing them food and water, whether it’s tipping the drivers, bringing resources to gem-cutting areas,” she says. “If there is a need for knowledge as well as for resources, he finds a way to provide that.”

David McConnell of The King’s Jewelers in Walnut Creek, CA, joined Dery on trips in 2011 and 2014.

“One of the things that struck me the most was that he always strove to leave almost every individual that he interacted with better than when he started,” McConnell says. “If it was someone selling rough and there was nothing Roger wanted to buy, he would try to give the guy something, even if it was a new baggie to hold the rough. Supplies of any kind are hard to get and expensive.

“And that endears people to him. That certainly helps in his business, but that’s not why he does it. He really cares about these people.”

McConnell is one of many jewelers who urged Dery and his wife, Ginger, to set up a non-profit organization so that other people can help, too. “When you’re THERE, there are opportunities to give, to throw in some cash for the school. But when you go back to the U.S. and you’re doing gem roundtables and talking about gemstones and all the good they do, it’s hard to NOT have an organization set up for people to contribute to.”

“Over the years, that’s something I’ve been whispering in his year,” McConnell says.

In 2017, a group he led got together, contributed some money and again encouraged the Derys to start a fund.

“They wanted us to have ready funds and also something they could easily contribute to,” says Ginger. “It wasn’t our idea and we probably wouldn’t have thought of it. We were humbled and overwhelmed. It’s pretty amazing that people who came from all different walks of the retail industry would come together and want to make such an incredible difference in East Africa. Only in retrospect can we say that we were showing them how a small amount of money can make a big difference in people’s lives.”

“Gem Legacy is dedicated to what we’ve been doing in Africa for over 20 years,” says Roger, “In our 57 combined trips to Africa, we have met thousands of people in East Africa’s remote villages and bush mines where gems have had a remarkable influence on their lives. Gems bring hope, make a difference, and leave a lasting change, a timeless legacy.”

The organization has several initiatives, including Gem Faceting Training, Kitarini Primary School, and Gemological Training. One hundred percent of every donation will return directly to the communities where gems are mined.

Dery was featured in SHARING THE ROUGH, a 2014 documentary about the journey of gems from mine to market, directed by filmmaker and jeweler Orin Mazzoni. The film traces the path through the supply chain of a single gemstone and touches on the potential of the gem industry in Tanzania and Kenya and the importance of gemological education there.

“The first time I went in September 2011 it changed my perception of the industry, my ability to talk about it, my heart for the people, the miners, the kids,” Ginger Dery says. “And so that’s what we want to share with retail jewelers. If it can do that for me, and I live colored stones, what can it do for them, to be able to say `Yeah, I was there. Let me tell you about it. Let me tell you about this school in Africa that we support.”

Roger encourages retail jewelers to travel to Africa, or if not Africa, then to Oregon sunstone mines or Maine tourmaline mines or gem shows in Tucson. “If clients know you just order something from New York or LA, that’s not very exciting. You would like to be able to say, `I traveled to this particular mine in Kenya, bought the miners a couple cases of water and a 5 kilo bag of corn, sat and talked to the guys and had a pretty good feel about what they were going through that day.”

McConnell says his visit to the school in northern Tanzania, in a ruby mine area, made a deep impression on him. “A school has been put together by the local mine owner to benefit the miners’ children. It’s a direct result of having ruby in the area, and there’s Western money coming in. There are hundreds of kids there, who have enthusiasm for life and for interacting with us. That was one of the absolute highlights of my trip.”

McConnell says his African experience also added to his credibility and confidence when he’s selling gemstones in his store. Now he has a first-person story to tell about where the gems come from and how they can change people’s lives.

Gemologist Meredith Schlessinger of Byard F. Brogan in Pennsylvania made the trip in 2016. “Just the little bit we donate goes a long way. A couple hundred dollars can feed children at an orphanage for close to a year. I was so moved by what they do that that was why I decided to go on that trip.  I’m excited for the people of Eastern Africa because they are the ones who are going to benefit.”

Just the little bit we donate goes a long way.

Maggie Szekely-Lusso, president and jewelry designer for Servis & Taylor in Los Angeles, says her socially conscious California customers are impressed knowing their jeweler has gone to the source. “We bought rough and had Roger cut it. People just love it. Customers have adopted foster elephants in Africa, and if they haven’t been to a gem roundtable yet, they ask to be put on the list for next time.”

Szekely-Lusso’s trip was in 2017. “For us, being independent jewelers, having the challenges with the diamond world, we were already interested in color. But recently we made a huge turn toward color. There’s more happiness in it and better margins. Selling loose gems, we create a lot of custom work.

Cohen of Continental Jewelers met Dery three years ago when she hosted a viewing of “Sharing the Rough” in her store. “Roger has developed a relationship with people to understand what they need and what he can do to help.”

The story that most resonated with Cohen was that of Esther, widow of miner Gichuchu OKeno (featured in Sharing the Rough), who had to work hard to support her children when her husband died. A single mom, Esther founded Precious Women Mining and now spends her days crawling in holes with a hammer and chisel searching for tsavorite. Cohen is working on raising funds for Esther, whose most immediate need is a new $5,000 compressor to push more air into the mine. Cohen is donating a percentage of her colored-gem sales to Esther’s endeavor.

For more information about Gem Legacy Inc. or to donate, email [email protected] or visit gemlegacy.org. To learn more, follow Gem Legacy on Instagram @thegemlegacy and on Facebook @thegemlegacy.

How Should This Retailer React To A Former Employee’s Accusations Of Employment Discrimination?

The Newest Updates From Gemvision And More Service News

How To Make The Best First Impression With Retailers

From A Jewelry Spa Box To Your Sink’s New BFF, Here’s The Latest Gear For Jewelry Pros