WITH EXACTLY A week to go until Christmas Day, the 2019 holiday season is on track to deliver a cheery surprise to many of North America’s long-struggling independent jewelers, according to an INSTORE Mini Survey.

“It’s been a while since we’ve had a real Christmas season,” said Eve J. Alfille, owner of the Eve J. Alfille Gallery and Studio in Evanston, IL. “I thought that trend was done and gone. But this year is HOT! Not only for custom, but actual sales, big items, over $3,000, as well as the ones under $1,000.”

Video: How to Find a Good Manager for Your Jewelry Store

Thirty-seven percent of the almost 140 store owners and managers who took the survey rated the season so far as “better than expected” or “terrific”, while 36 percent said it was in line, although keep in mind many jewelers came into the key sales period anticipating strong sales. Meanwhile, about one in four respondents said the season had been either “disappointing” or “dismal” to date.

Aflille said she was surprised by the buoyant consumer sentiment, especially given the current “political ferment.” Other jewelers attributed their solid sales performances to the short season, strong local economies, and a willingness among shoppers to splurge.

Diamond jewelry along with colored jewelry and even very late custom orders were cited as the key sales drivers with over one-third of the jewelers reporting an average sale in excess of $600.

“People just seem like they are in better and more festive moods this year,” said Marc Majors, owner of Sam L. Majors Jewelry in Midland, TX. “I’m seeing buyers of color stone jewelry again and that’s nice because I’m loaded with it.”

Seasoned hands cautioned that there is still much that could happen in the last week of the season, with a number of variables ranging from the weather to changing shopping habits that could sway final results.

“In my 44 Christmas seasons, I’ve seen it turn both positive and negative. All you can do is be prepared for opportunity when it presents itself. Fingers crossed and bon chance!” said Jon Walp, owner of Long Jewelers in Virginia Beach, VA.

Others were more openly upbeat that a happy ending awaits this year’s Christmas tale.

“It’s funny but if you want a good laugh stop by Christmas Eve. We are always packed, and yes all men,” said Tommy Thobe, owner of The Village Gem in Perry Hall, MD. 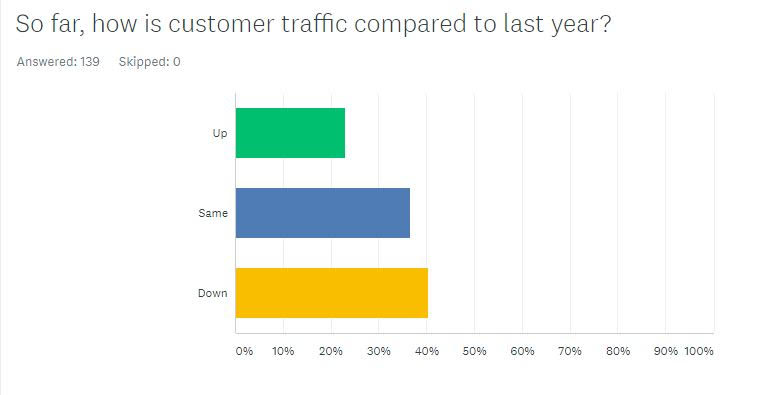 The third 2019 Holiday Season Mini survey was taken on Monday and Tuesday by 138 independent jewelers who are part of our Brain Squad readers group.

Related Topics: Chris Burslemholiday business
click to Comment(Comment)
Up Next

Chairman of Hamilton Jewelers Dies at 86

$66M in Jewelry Stolen From Home of Billionaire Heiress

Retail Workers Quitting at Record Rate: “My Life Isn’t Worth a Dead-End Job”

Afraid to Raise Jewelry Repair Prices? Here’s Why You Shouldn’t Be